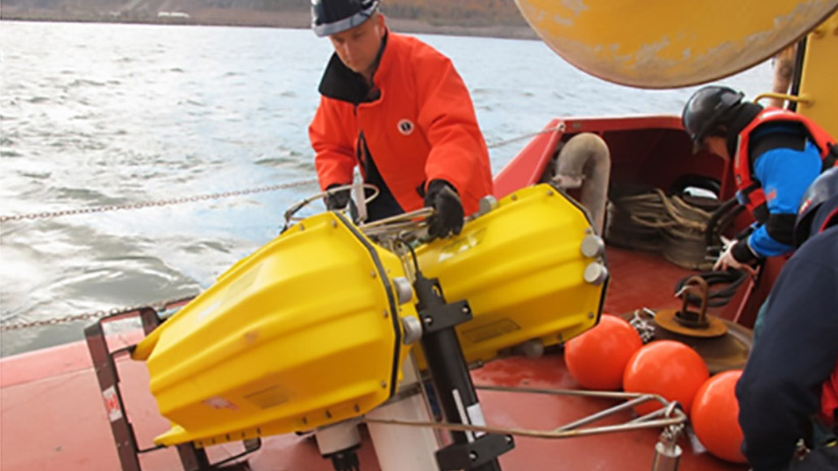 The recent increases in the length of the Arctic open water season have allowed for increased activity in the region. To support this increase in Arctic marine activity, and to provide data for assimilation into ice/ocean forecast models, the Bedford Institute of Oceanography (BIO) has been running a real-time ocean observatory at the east end of the Northwest Passage since 2009.

As this ocean observatory was deployed in an area where BIO had maintained an ice/ocean monitoring array from 1998-2011, which included moored ASL Ice Profiling Sonars, a long baseline of measurements could be used to establish a relationship between the salinity of the upper water column in the late summer and the time of freeze-up (Hamilton, Collins and Prinsenberg, 2013).

A paper has been written by Jim Hamilton and Merle Pittman in Atmosphere-Ocean showing that the real-time data and the relationship they found could predict freeze-up 2 to 4 weeks in advance (Hamilton and Pittman, 2015). The system is currently under maintenance, but is expected to be redeployed this year.

In November 2015, BIO installed an ocean observatory a few kilometres to the west of the Canso causeway which connects Cape Breton to the rest of Nova Scotia. This ocean observatory is being used as a test bed for further developments in Ocean Observatory technology. Real-time ice draft, ocean current, temperature, salinity and density data are available online. The raw draft measurements are sampled at 3 second intervals, with ice draft statistics computed over 6 hour periods for display on the website.