AUV’s Tested for Oil Detection in the Arctic 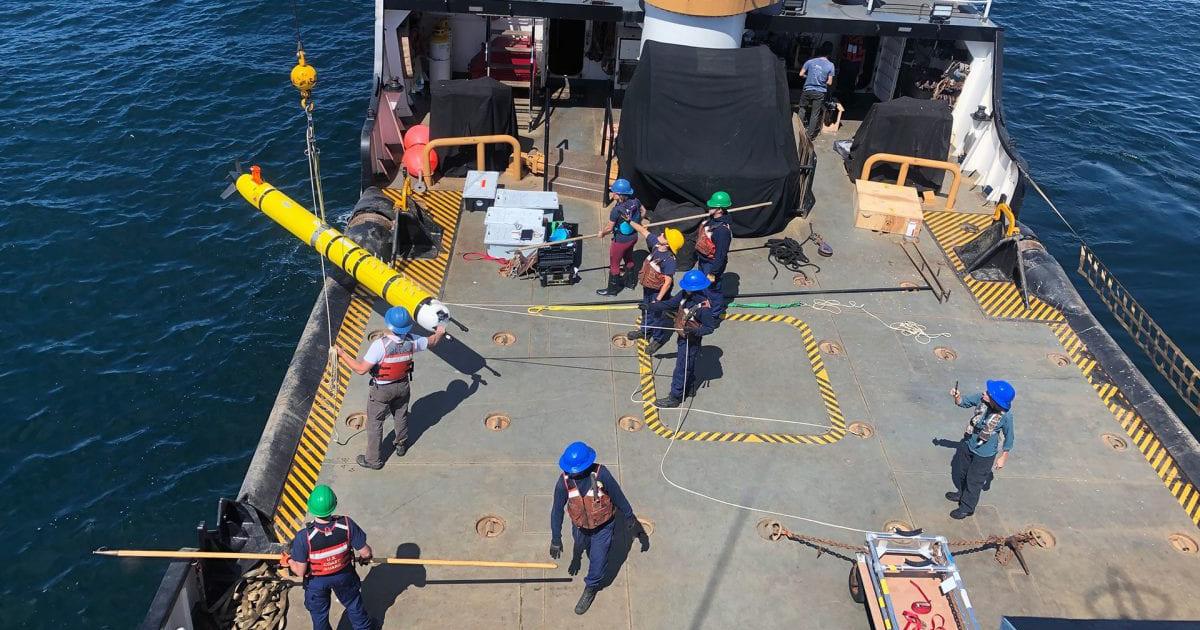 As sea ice continues to melt in the Arctic and oil exploration expands in the region, the possibility of an oil spill occurring under ice is higher than ever. But how first responders will deal with oil trapped under ice in such an extreme and remote environment is a huge unresolved question.

“With the opening of the Northwest Passage a few years ago and more commercial ships routinely traveling through the area, there have been concerns among various government agencies that there’s no real infrastructure in place to respond to an oil spill below the ice,” said WHOI engineer Amy Kukulya. “From a logistics standpoint, it’s very challenging to get resources to the Arctic.”

Kukulya is leading multiagency collaboration aimed at developing cutting-edge sensors and autonomous robot capabilities that will help improve oil spill responders’ situational awareness and decision making during an emergency. “As oceanographers, we see a critical need for autonomous underwater vehicles (AUVs) that can survey spills under ice over long distances,” she said.

As part of the effort, she and her colleagues deployed a series of AUVs in late August off the coast of Santa Barbara, California to test the vehicles’ oil spill detection capabilities for rapid response during a real-world maritime oil spill. Collaborators on the project include the Department of Homeland Security (DHS), the U.S. Coast Guard (USCG), the U.S. Environmental Protection Agency (EPA), the National Oceanic and Atmospheric Administration (NOAA), the Bureau of Safety and Environmental Enforcement (BSEE), Monterey Bay Aquarium Research Institute (MBARI) and the Arctic Domain Awareness Center (ADAC).

The original LRAUV was initially developed at MBARI under the leadership of James Bellingham, now WHOI’s director of the Center for Marine Robotics (CMR). The latest model, which is still being developed in conjunction with MBARI engineers, is designed specifically to detect oil spills under the ice. “Our goal is to provide the Coast Guard with greater awareness in the event of a real-world spill, and the ability to understand an incident while there is still time to react,” said Bellingham.

The vehicle can be launched into open water from shore, sea ice, ship or helicopter and is an ultramarathoner in the AUV world: it can operate continuously for more than two weeks over a distance of 620 miles (1,000 kilometers).

Dana Tulis, director of emergency management for the Coast Guard, says the new vehicle delivers on a critical and unmet need: fast and efficient data collection that can inform response management in remote and difficult-to-access areas.

“If you’re in a remote Arctic environment, rather than deploying a huge vessel, it would be ideal to have these easy-to-deploy robotic vehicles collect information from below the surface,” she said. “It’s a perfect complement to aerial drones, which we use to fly over remote areas instead of large planes. Embracing the latest technologies like this will allow us to save big on resources when it comes to oil spill response in the open ocean and in the Arctic. And, they can also help with more common spill response in non-remote areas."

Kukulya says a dozen LRAUV's have already been built by MBARI, and a thirteenth is underway with WHOI as part of the oil response collaboration.

“This has become the most heavily-invested-in DHS Center of Excellence project in history due to the uniqueness of the technology and the urgency of the problem. It’s hard to believe what we’ve been able to accomplish in just the past five years.”

The prototype fills a void in marine robotics between underwater gliders—which can travel long distances but lack the power and payload capacity to carry an extensive suite of sensors—and standard AUVs which typically operate for only 24 hours or less. It builds off MBARI’s noncommercialized underwater vehicle platform—called a Tethys LRAUV—to which various technologies have been added over time. This includes sonar mapping, navigation systems, and specialized sensors that can detect where oil is spreading—and where it is not. First responders can use this information to efficiently track an actual oil spill remotely as it’s happening.

“We’ve had tremendous success in developing an oil spill sniffing and mapping vehicle that’s ready for the Arctic,” said Kukulya. “MBARI masterminded the development of the base vehicle, and the ADAC project combines the best of WHOI robotics to create an exceptional platform. It can do things no other vehicle in the world can do with reliability."

Among the LRAUV’s key features, according to Kukulya, is a “buoyancy engine” which allows the vehicle to shift its internal weight and change its overall buoyancy so it can drift at zero propeller speed. This helps maximize endurance so it can rove for weeks on a single battery charge.

In previous field tests of the LRAUV’s capabilities in Monterey Bay, California, the researchers used a green, biodegradable dye in the ocean to simulate an oil plume. The LRAUV successfully tracked patches of the dye for hours as it drifted through the water, surfacing every few minutes to transmit data for review and analysis by the researchers. During the more recent testing at the Santa Barbara site, the team conducted another simulated spill, only this time they used real oil, not dye. The site has naturally-occurring oil seeps, from which an estimated 20 to 25 tons of oil are emitted from cracks in the seafloor each day. 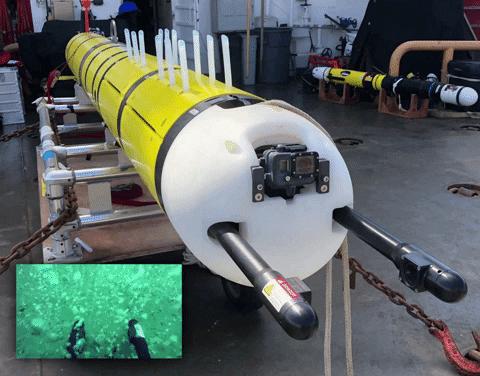 These two forward-facing black rods are part of a holographic camera system that was recently tested on WHOI autonomous underwater vehicles for oil detection in Santa Barbara. Here, the system is imaging gas bubbles jetting out of the seafloor. (Photo by Amy Kukulya, Woods Hole Oceanographic Institution).

During the simulated oil spill, the team tested out new gear on the vehicle, including a holographic camera system. Developed by emeritus WHOI biologist Cabell Davis at the marine technology company he founded, Seascan, the system sends out laser beams roughly seven times per second to take detailed, three-dimensional images of oil droplets in the ocean. A new WHOI “water gulper” that collects up to a dozen water samples per mission also made its debut.

In addition to new hardware, the team has integrated the Robot Operating System (ROS) onto a ‘backseat’ computer for autonomous behavior adaptations. WHOI research engineer Kevin Ducharme and assistant scientist Erin Fischell wrote and tested these new software capabilities on the REMUS vehicles, which will assist in oil spill rapid response efforts.

Beyond cutting-edge technology itself, one critical success factor in moving the project forward to date has been the highly collaborative and multidisciplinary team approach, according to Tulis. When she visited the Santa Barbara testing site in late September, she was surrounded by engineers and scientists from various areas of expertise all working toward the same goal—integrating the new technologies into Coast Guard responses.

“On a single ship, you had experts in remote sensing and engineering, chemistry, and data management,” she said. “As I went from station to station, I felt like I was in science camp.”

Kukulya agrees that collaboration has been key: “We’re all one team,” she said. Moving forward, she says another critical success factor will be quick mobilization of the AUVs in the event of an oil spill. “Having the right tools for the job is one thing, but deploying them quickly enough in a remote and/or ice-covered region is another,” she said. 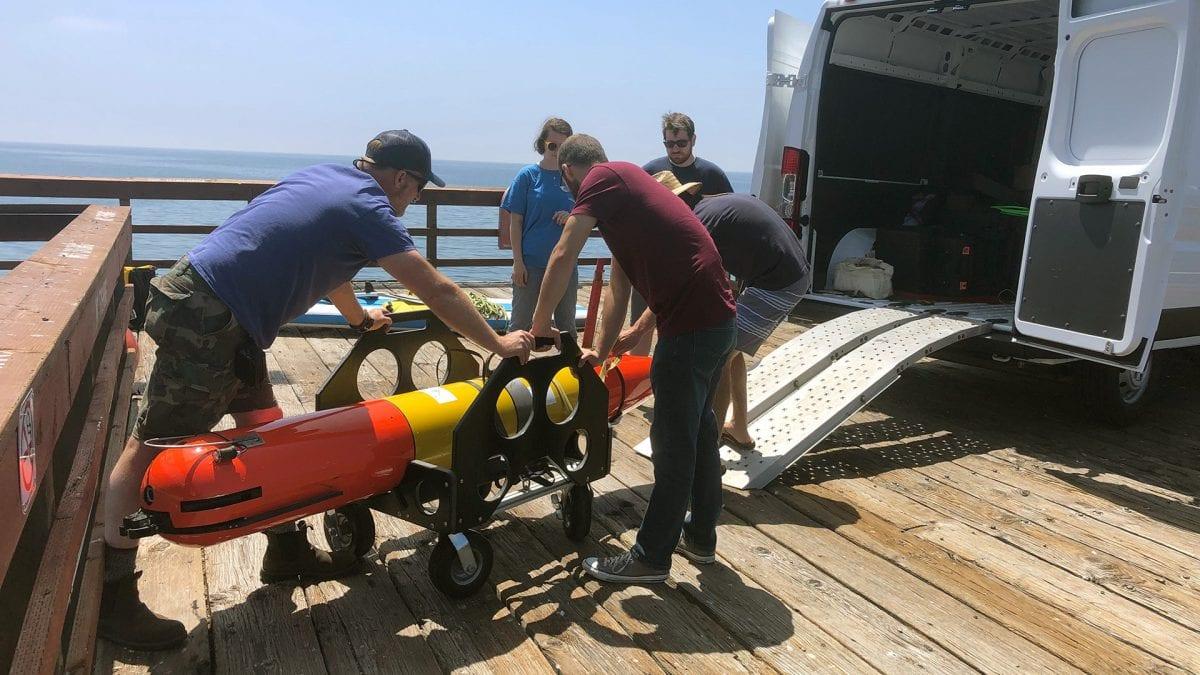 Researchers get the LRAUV ready to deploy for the simulated oil spill response drill. WHOI’s strength in marine operations and logistics, combined with the vehicle’s small form factor and easy-to-handle design, will enable quick mobilization in the event of an oil spill incident. (Photo by Amy Kukulya, Woods Hole Oceanographic Institution)

Lessons learned from the 2010 Deepwater Horizon oil spill taught Kukulya and her team a great deal about the challenges of rapid response. “It took 10 days to get the first AUV in the water, and that was in a place that was easy to access,” she said.

The speed at which first responders could deploy AUVs in the Arctic remains a question, but Kukulya says that in addition to its strength in technology development, WHOI shines in the area of marine operations.

“We’re uniquely positioned in terms of our ability to not only develop cutting-edge technology, but get it deployed in the water very quickly,” she said. “Eventually, I can envision WHOI becoming the go-to place in the event of an oil spill in the Arctic or anywhere, as well as for rapid-response technology for harmful algae blooms, marine microplastics, or any environmental anomaly in the ocean that needs discrete sampling. We have systems right now in the lab that are ready to respond."

This work is funded by the Bureau of Safety and Environmental Enforcement (BSEE), the Department of Homeland Security, and the Arctic Domain Awareness Center (ADAC). The information in this article reflects investigations and conclusions sponsored by ADAC, DHS Center of Excellence in Maritime Research, hosted by the University of Alaska.
Associated activities were supported by DHS under Grant Award No. 2014-ST-061-ML0002. The views and conclusions of the information presented in this article reflects research conducted via ADAC and should not be interpreted as necessarily representing the official policies, either expressed or implied, of the U.S. Department of Homeland Security.