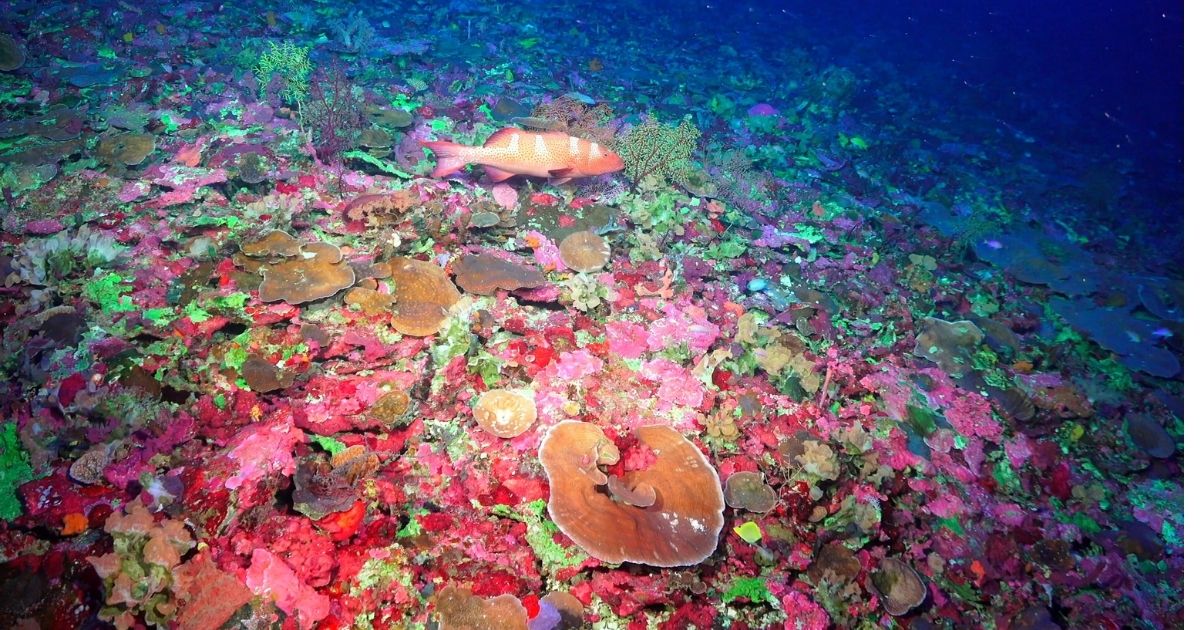 They also took critical habitat samples that will lead to a greater understanding of the spatial relationships between seabed features and the animals found in the Coral Sea.

The complex and scientifically challenging research was completed aboard Schmidt Ocean Institute’s research vessel Falkor, on its fourth expedition of the year, as part of the Institute’s Australia campaign. Using a remotely operated underwater robot to view high-resolution video of the bottom of the ocean floor, some 1,820 meters deep, the science team examined deep sea bathymetry, wildlife, and ecosystems. The collaborative mission brought together scientists from Geoscience Australia, James Cook University, University of Sydney, Japan Agency for Marine-Earth Science and Technology (JAMSTEC), Queensland Museum Network, and Queensland University of Technology, to answer a range of questions about the geological evolution and biology of the deep sea canyons and reefs.

“This included the most comprehensive midwater robotic dive survey series to ever have been conducted in the South Pacific,” said Dr. Brendan Brooke, the expedition’s lead scientist from Geoscience Australia. “Research vessel Falkor has integrated a range of technologies that have allowed us to work across the full range of ocean depths in the Coral Sea and to provide data for multiple disciplines including geology, biology, and oceanography.”

“This expedition has provided us with a unique window into both the geological past and the present day conditions, allowing scientists and park managers to be able to see and tell the full story of the interconnected environments,” said Dr. Beaman. “This vision is invaluable for science, management, and education.” 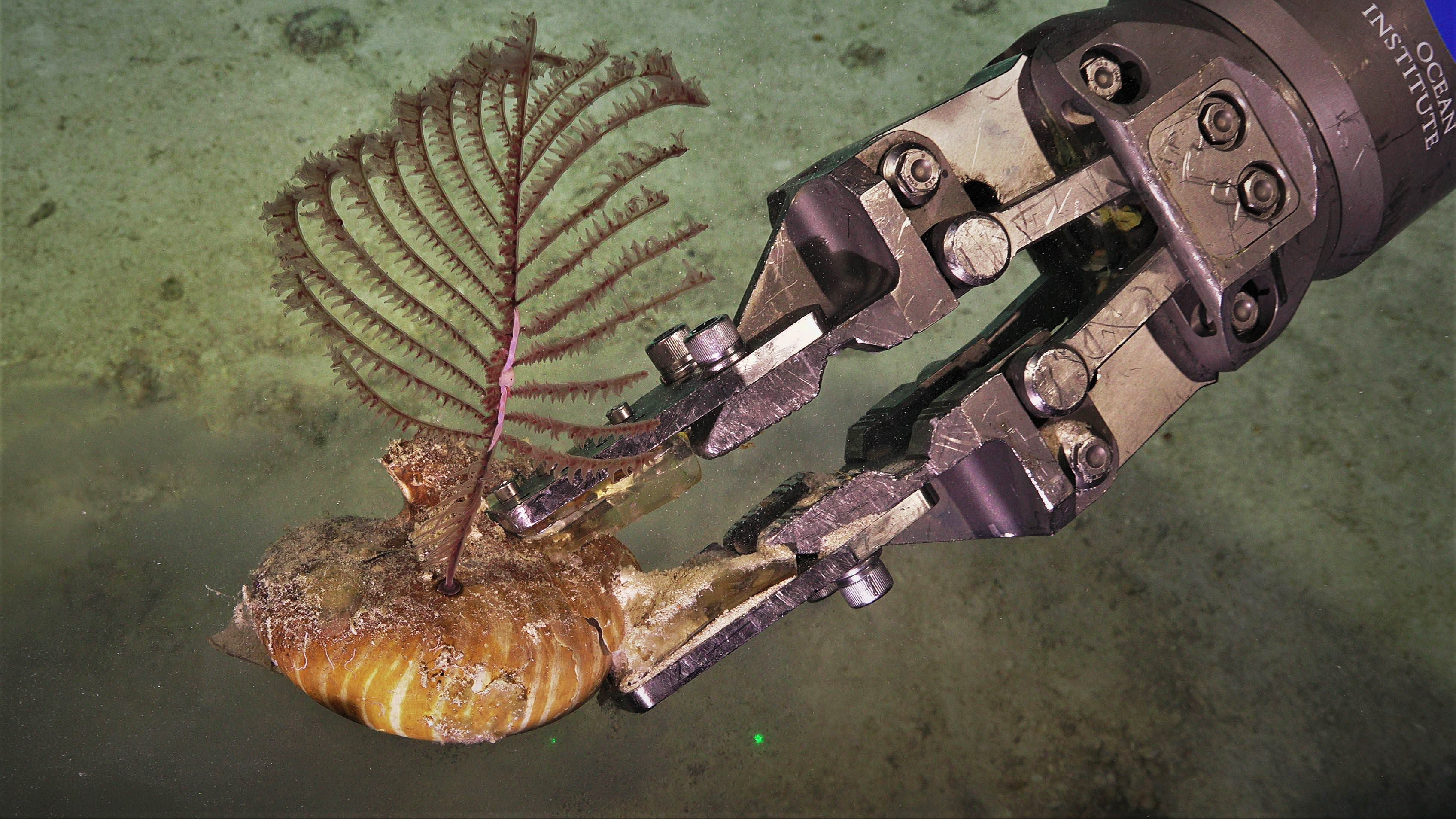 ROV SuBastian’s manipulators gently grasp a black coral growing on a nautilus shell at a depth of 550 meters deep at Herald Cays. This black coral belongs to a family called Schizopathidae; however, experts suspect the genus might belong to an entirely different family. With this complete specimen researchers will finally be able to extract and sequence its DNA, comparing it with species from both families to see to which family it is most closely related.

During the expedition, researchers took the deepest samples ever collected of soft coral and scleractinian coral in the Coral Sea. They also collected the first sample of ancient bedrock beneath the Great Barrier Reef, estimated to be between 40 and 50 million years old. Scientists made the first recorded observation in Australia of the extremely rare fish Rhinopias agroliba, a colorful and well-camouflaged ambush predator in the scorpionfish family. The cruise also included the most comprehensive survey of midwater jellyfish in the South Pacific. 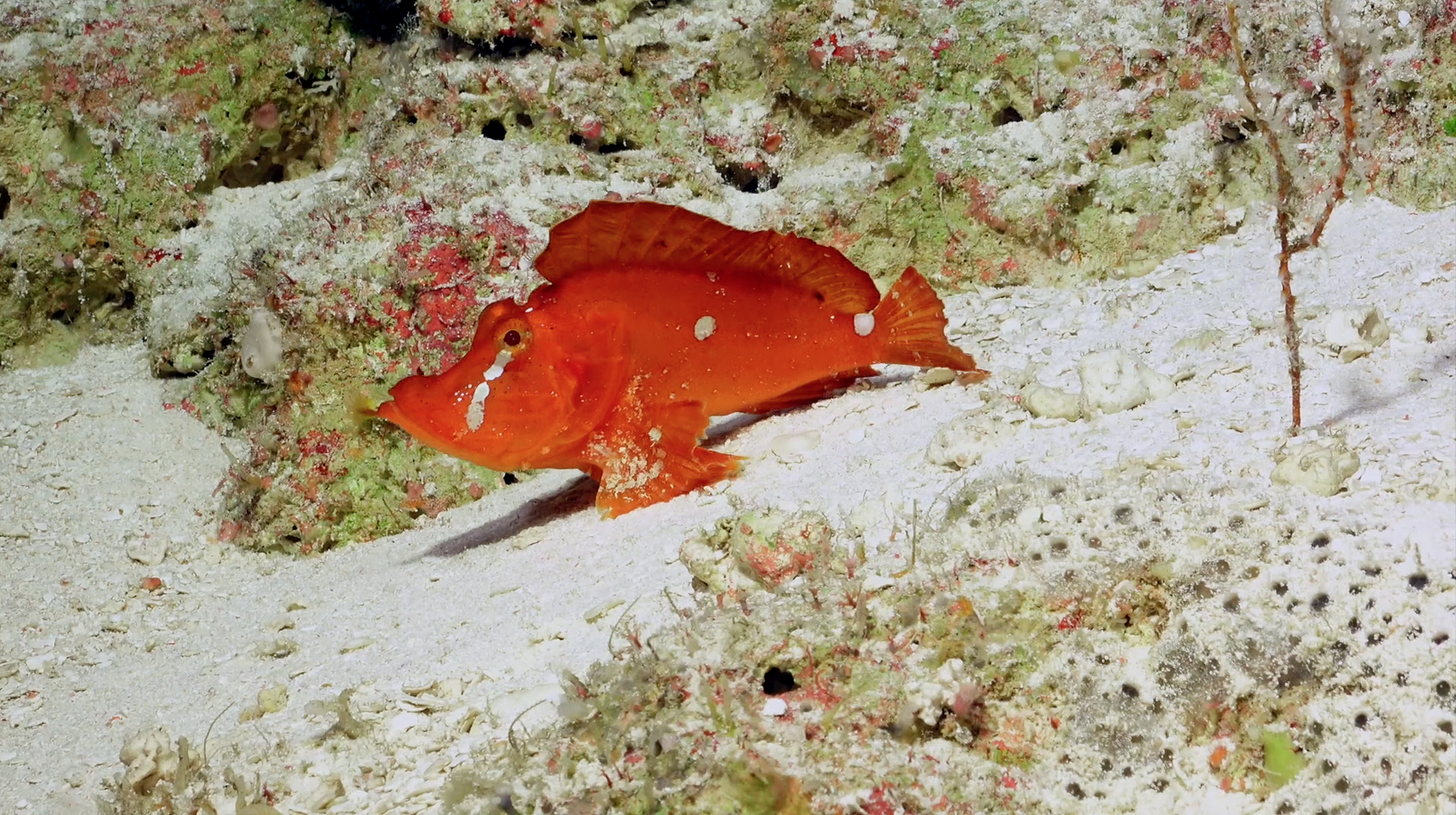 This Rhinopias agroliba is an exceedingly rare species in this genus and ROV SuBastian getting footage of it in near the Great Barrier Reef is an a range extension record for Australia. The fish appears to “walk” along the seafloor using its pectoral fins, and its motion in doing so has been described as “an awkward, lumbering gait.” It is an ambush predator.

In addition to the underwater dives, high-resolution mapping of the seafloor was conducted and covered 38,395 square kilometers, an area three times greater than Sydney. The maps include all the major coral atolls on the Queensland Plateau within the Coral Sea Marine Park and an 80-kilometer section of canyons off the northern Great Barrier Reef Marine Park. 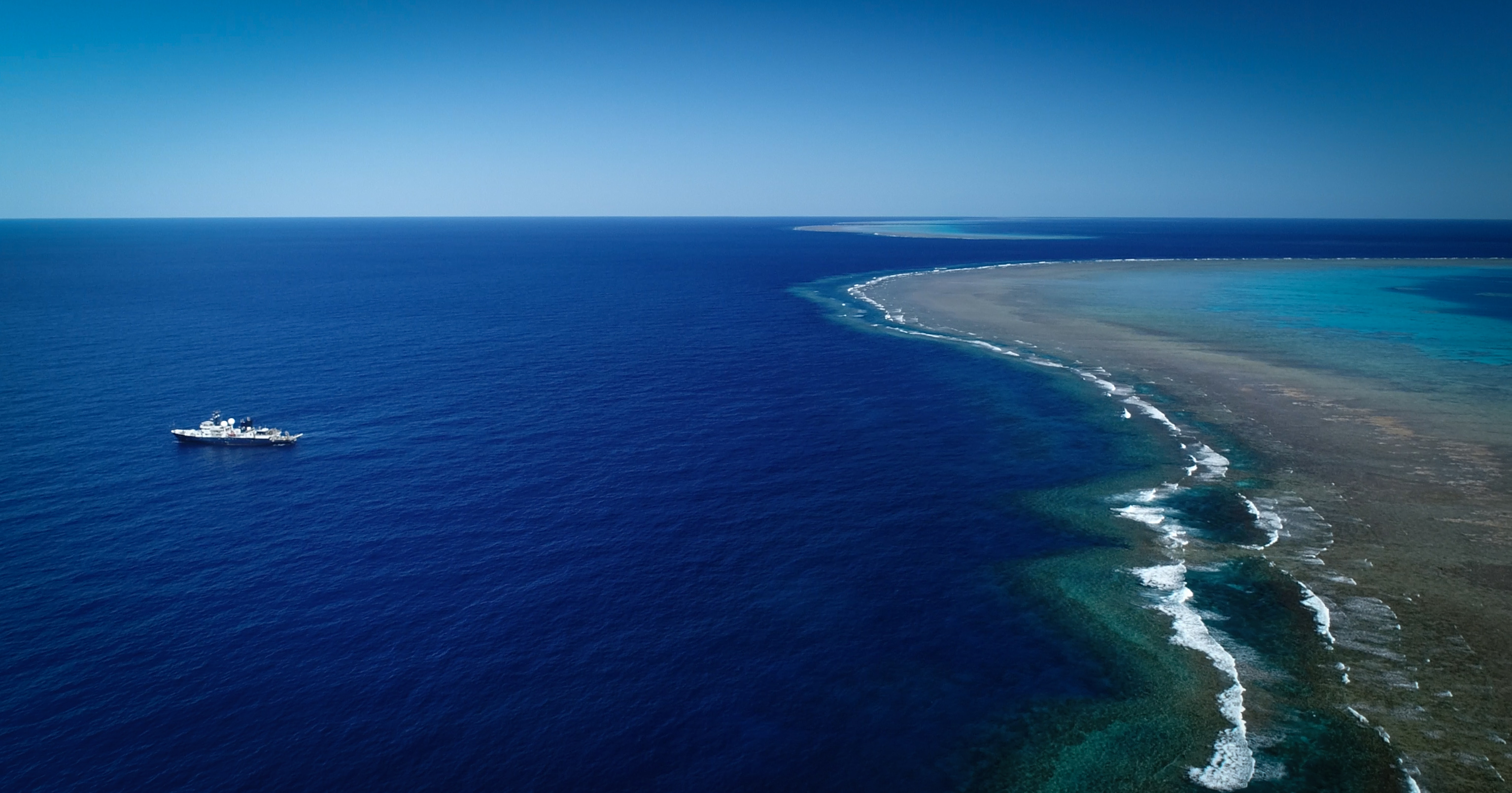 RV Falkor holding position on the outside of Ribbon Reef #5 as ROV SuBastian works its way up the shelf to reveal the origins of the Great Barrier Reef.

“These maps, samples, and images are fascinating and provide a new understanding of the geological diversity and biological wealth of a region that is already world-renowned for its natural beauty,” said Dr. Jyotika Virmani, executive director of Schmidt Ocean Institute. “The data will help marine park managers to protect these ecosystems that are so vital for our global biodiversity and human health.”

Live streaming of the 18 underwater robotic dives via Schmidt Ocean’s channel on YouTube and 112 hours of high definition underwater video during the month-long expedition, which ended August 30, allowed the science team to share their knowledge and excitement of the voyage’s discoveries with the world. Through the livestreams, the scientists could interact directly with the public via chat and commentary. 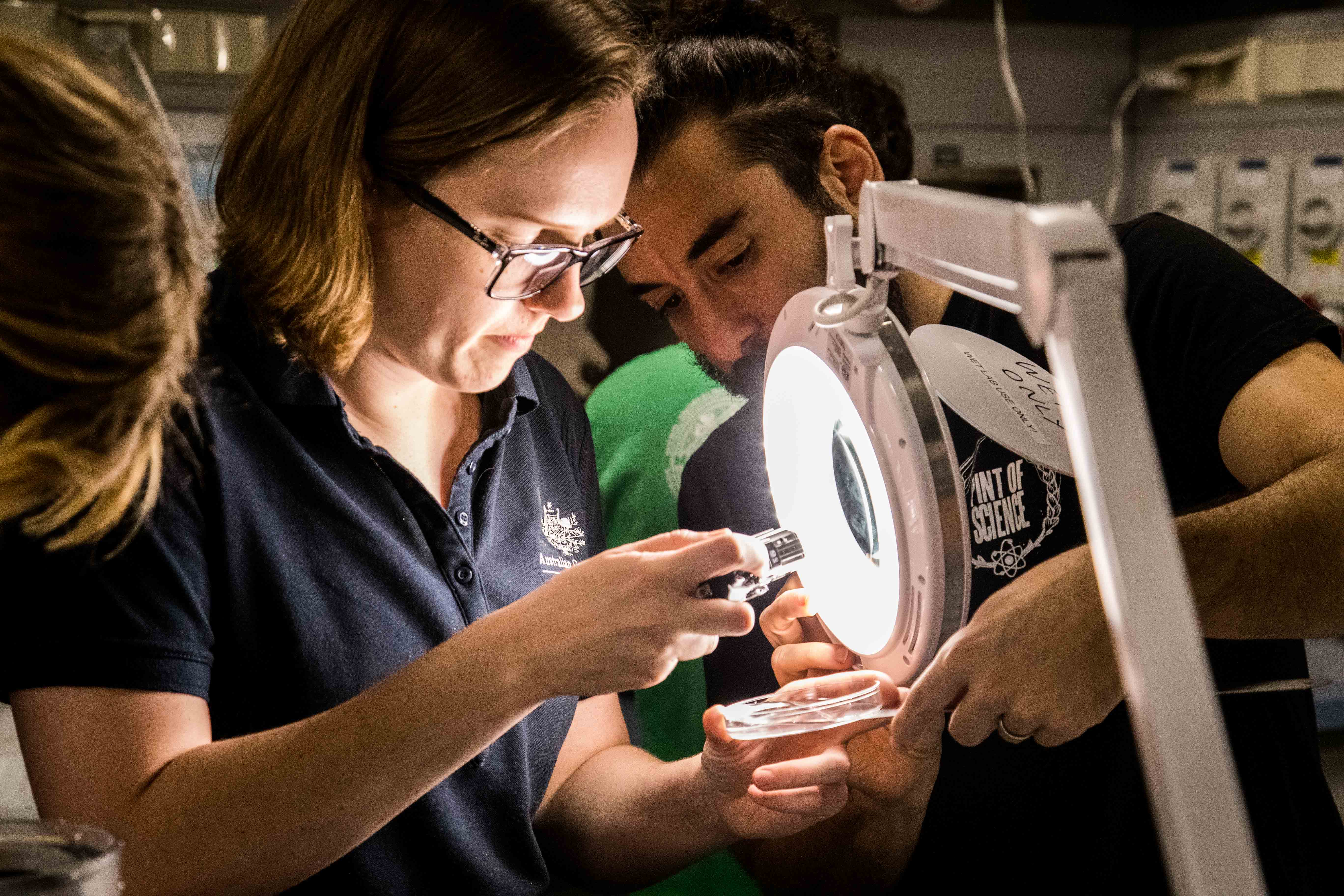 “Schmidt Ocean Institute and the technology that it has brought to Australia is a huge enabler in better understanding our marine resources from a lens of diverse disciplines,” said Dr. Scott Nichol, one of the lead expedition scientists from Geoscience Australia. “This work brings new understanding and will keep the scientists busy for years.”