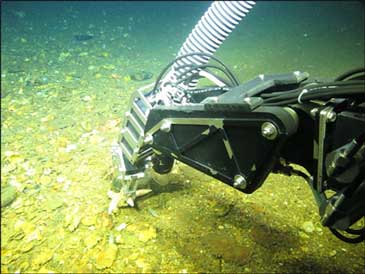 The Bureau of Ocean Energy Management (BOEM), National Oceanic and Atmospheric Administration (NOAA), and the U.S. Geological Survey (USGS) are pleased to announce that the National Oceanographic Partnership Program (NOPP) will present the 2015 Excellence in Partnering Award to the team that conceived, managed and conducted the Atlantic Canyons: Pathways to the Abyss project. The ceremony will take place on Tuesday, February 23, from 1:00–2:30 p.m. at the Ernest N. Morial Convention Center in New Orleans during Ocean Sciences 2016, along with a screening of the 23-minute HD video produced as part of the project.

This multi-year effort leveraged the resources of BOEM, USGS, NOAA’s Office of Ocean Exploration and Research, 12 universities and research institutions, and two companies, to explore Baltimore and Norfolk Canyons about 60 miles offshore of Maryland and Virginia. The work took place under the NOPP research umbrella. Explore the backstory and many of the exciting discoveries from this project by watching the stunning video.

The research findings are significant and depict a biologically rich region that had not been fully explored in the past, including historically important shipwrecks, extensive deep-sea coral communities, and a vast methane-seep ecosystem. Analysis of a year’s worth of data on the ocean’s currents, temperatures, salinity and chemistry, collected by benthic landers, will be included in a forthcoming report BOEM expects to publish in 2016, and will add to the body of knowledge about the canyons as well as the broader western Atlantic Ocean. The benthic landers were designed and engineered by researchers from the University of North Carolina Wilmington, from the Netherlands and the USGS.

The federal agencies contributed equally to the study – funding approximately $9 million total between them over three years. “The partnership demonstrates that the public and private sector can achieve far more scientifically by working together than working alone, and that partnerships can be extremely effective to meet overlapping science needs,” said Dr. Rodney E. Cluck, Chief of BOEM’s Environmental Studies Program and co-chair of the federal working group that facilitates the NOPP.

In the 19-year history of the NOPP, this is only the second time that one of its studies has received two major awards. In January 2014, Secretary of the Interior Sally Jewell presented the DOI Partners in Conservation Award to this research team. Members include CSA Ocean Sciences as the prime contractor, and lead Principal Investigators from the University of North Carolina Wilmington and Florida State University. The archaeology lead was from the University of Rhode Island, and scientists from 11 other research institutions contributed to the research. ArtWork produced the photos and videography.

For BOEM, the research contributes updated environmental and ecological information to inform reviews, future decisions and mitigation measures related to offshore energy and minerals. Analysis of this information will enrich the field of marine science for all to use.

NOAA’s Office of Ocean Exploration and Research and Office of Marine and Aviation Operations supported this study and their own exploration mission in numerous ways, including with several ships and assets such as remotely operated vehicles (ROVs), and with data management, education and outreach efforts. NOAA involvement in the expeditions contributed to new discoveries to support management decisions.

BOEM’s Environmental Studies Program develops, funds, and manages rigorous scientific research to inform policy decisions regarding the development of energy and mineral resources on the Outer Continental Shelf. Join us on Facebook, Twitter and our other social media channels. Study reports covering more than 40 years and profiles are available here.