As the Climate Warms, We are ‘Primed’ for Worse Storms Than Sandy 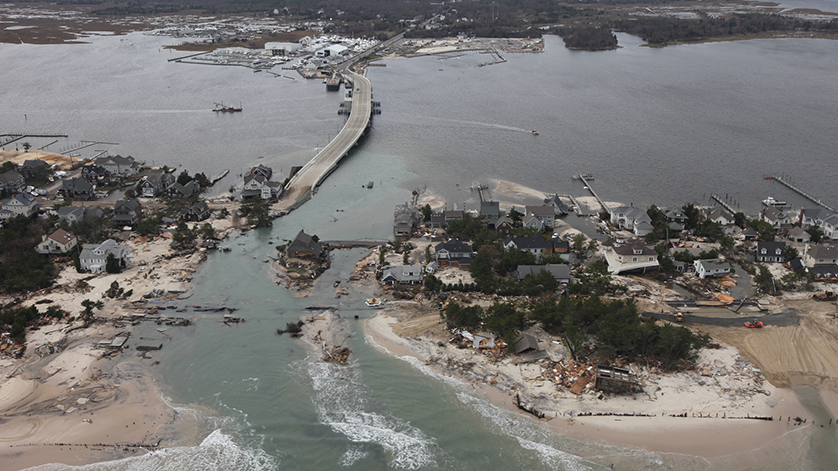 That’s the outlook from David A. Robinson, a Rutgers geography professor who has served as the New Jersey state climatologist for 25 years.

With the warming of New Jersey’s climate expected to continue, the atmosphere will hold nearly 4 percent more moisture for every 1 degree Fahrenheit rise in temperature, according to Robinson. The increased warmth and moisture will lead to a more energetic atmosphere, and warmer sea surface temperatures will add fuel to the fire. Meanwhile, rising development in coastal areas has put more people in harm’s way.

“You still need a trigger but we’re primed for more significant storms that will produce heavy rainfall and heavy snowfall,” he said.

That doesn’t mean storm frequency will rise because it’s unclear whether the conditions that trigger storms will increase or decrease. But storm precipitation and wind speeds should increase, along with freshwater and storm surge flooding and wind damage, according to Robinson. And more intense tropical storms may make it up to the Jersey coastline and beyond, fueled by warmer ocean waters, researchers say.

Robinson and Steven G. Decker, an instructor in Rutgers' Meteorology Undergraduate Program, say Sandy was not the worst possible storm in the region and they warn that as the sea rises, much weaker storms than Sandy may pack big punches.

Since the early 1800s, several storms have posed greater threats in the mid-Atlantic region than Sandy. They include the 1821 hurricane that made landfall in Cape May, with sustained winds that may have topped 100 mph; the deadly 1938 hurricane that slammed into Long Island and southeastern New England; and the 1944 hurricane that cruised just off the New Jersey coast but dumped heavy rain, brought strong winds and spawned a significant surge, according to Robinson and Decker.

Sandy's extreme storm surge and strong winds caused most of its damage. But a slower storm could cause far more coastal and inland flooding damage than Sandy, and future storms could unleash stronger winds along the coast and inland, they say.

Anthony J. Broccoli, a meteorologist and professor who chairs Rutgers' Department of Environmental Sciences, said the consensus, based on computer simulations, is that the strongest hurricanes in the North Atlantic basin will get stronger by the end of this century.

But that conclusion is far from iron-clad and it’s also unclear if the number of hurricanes will increase, decrease or remain the same, Broccoli said. A more subtle question is how the hurricane threat to New Jersey will change over time, he said.

“A warmer climate could make it easier for storms to maintain their intensity as they move out of the tropics,” he said. “So even if there aren’t more storms, there could be more storms that survive at a given intensity level and reach our latitude. Storm tracks also could change, and that could lessen or increase the threat to New Jersey.”

“But we have such an investment along the Jersey coast that it’s going to be one of the last places where people will back off,” he said. “Economically, it’s an enormous part of the state, so you’re going to see battles to deal with Mother Nature well into the future.”