Arctic Shipping Routes May be Open by 2080 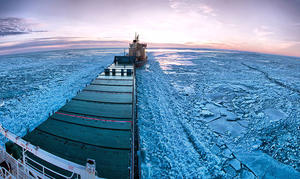 Commercial summer shipping across the North Pole may be possible by the end of the century, with the first potential crossings feasible for ice-strengthened ships around 2040.

According to this study, by scientists at the National Oceanography Centre (NOC), Arctic shipping could potentially account for as much as 10% of all cargo transported between Europe and the Pacific. It will help supply communities and industries along the coasts of Siberia and Canada.

A simulation using NOC ocean models suggests that approximately 40% of Arctic summer sea-ice cover will consist of broken-up ice by the 2040’s. This will allow certain classes of ice-strengthened ships to move directly through the high Arctic, saving time and fuel relative to traveling up the Siberian coast.

Although fuel savings could have economic and environmental benefits, soot from ships could also accelerate ice melting by reducing the reflective qualities of the sea-ice. There is also concern that any oil spills might take longer to dissipate in the Arctic due to the lack of bacteria to break it up and lower ocean temperatures.

This research, published in the Marine Policy, will ultimately feed into the COPERNICUS forecasting system – which aims to predict and forecast ocean behavior in a way that helps industry in Europe.

The lead author of the paper Dr. Yevgeny Aksenov, from the NOC, said “This is an excellent example of how NOC science can be valuable to industry as well as the scientific community. What became evident while we were conducting this study is that the Arctic is changing so quickly that we will have to reconsider some of the elements we base our models on.”

The area of summer broken-up sea-ice around the margins of pack ice has widened by around forty percent over the last three decades. This means that ocean waves can propagate deeper into the Arctic Ocean, further breaking-up the ice. As a result future research will look to include waves in models of the Arctic Ocean.

The study was conducted as part of the EU FP7 funded project “Ships and Waves Reaching Polar Regions (SWARP)”, which aims to use oceanographic research to help European industries. In addition, it also received National Capability funding from the Natural Environmental Research Council.