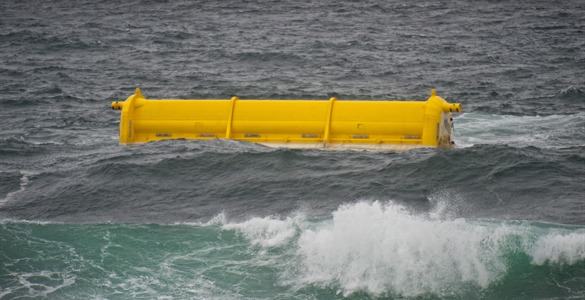 The academic analysis examines data generated by the Oyster 800 machine last year – which includes operating during major storms with waves reaching eight metres – and verifies that the Oyster flap generates power as predicted in wave tank and numerical tests.

The initial results have been published in a blog post by the company’s Chief Technical Officer Dr Paddy O’Kane and can be accessed here.

“These exceptional results have been gathered in more than 750 distinct sea states encompassing 94% of Oyster’s power matrix and verify, for the first time, that predictions of the energy Oyster can generate in any given sea state are accurate – and in the case of large sea states is actually greater than our original calculations.

“Very few, if any, other wave energy technologies have been able to verify as much data across as wide a range of sea states, including operations through major storms.

“In simple terms, Oyster does exactly what it says on the tin.

“As a business this gives us confidence in Oyster near shore technology, and confirms that future iterations of Oyster technology can be developed at laboratory and test tank scale – secure in the knowledge that subsequent full-scale machines will perform as predicted.

"Our business plan is to continue to develop the next-generation Oyster at laboratory scale and focus on areas of the technology which are less reliable, in particular the power take off system.

“To achieve this we are working with Bosch Rexroth, Carnegie Wave Energy and others to develop WavePOD – a sealed sub-sea generating unit which can be used by a range of wave energy technologies, including of course future iterations of Oyster.

“We have already built and are operating a tenth-scale WavePOD prototype at the world-leading Institute for Fluid Power Drives and Controls (IFAS) at RWTH Aachen University, Germany, and we will shortly be publishing our preliminary results.”

“We are keen to involve as many industry players as we can in WavePOD, and the consortium is open to all,“ Malcolm concludes.