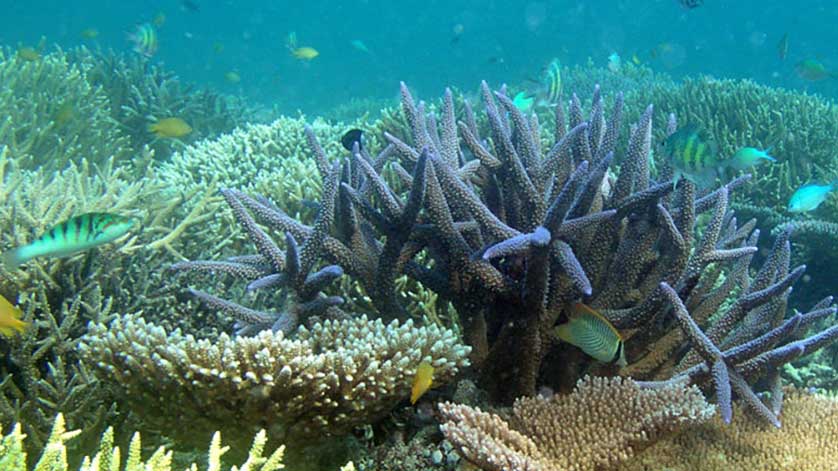 Earth’s coral reefs teem with diverse forms of life, from microscopic phytoplankton to whale sharks. As much as one quarter of all ocean species depend on reefs for food or shelter—a remarkable statistic considering that reefs cover less than two percent of the ocean bottom.

Coral reef ecosystems play a vital role in maintaining Earth’s marine biodiversity and are valuable economically and culturally. Reefs protect shorelines from storms, provide food for millions of people and create both jobs and revenue in the tourism industry.
The bad news: reefs are in trouble.

Rising water temperatures linked to climate change threaten the health and function of these fragile ecosystems, triggering events such as coral bleaching. Overfishing of key fish and invertebrate species and overharvesting of corals disrupt the natural systems, introducing invasive species and resulting in coral disease.

Researchers aren’t sure exactly how bad the status of Earth’s coral reefs is, because very little of the world's reef area has been scientifically studied. Most coral reef measurements to date have been made by labor-intensive diving expeditions, which can sample only one very limited site at a time. Many reefs have never been surveyed at all.

Eric Hochberg, associate scientist at the Bermuda Institute of Ocean Sciences and CORAL project Principal Investigator says, "Right now, the state of the art for collecting coral reef data is scuba diving with a tape measure. It's analogous to looking at a few trees and then trying to say what the forest is doing."

Enter NASA: A new three-year NASA field expedition to examine Earth’s coral reefs is now underway. The CORAL project—short for the “COral Reef Airborne Laboratory,” uses advanced optical instrumentation to survey the condition of more of the world's coral reefs than has ever been undertaken. This effort gives scientists a unique opportunity to understand coral reefs ecology and condition at regional and global scales, rather than relying on patchy, single-point surveys.

CORAL is using an airborne instrument called the Portable Remote Imaging Spectrometer (PRISM), developed and managed at NASA's Jet Propulsion Laboratory (JPL). PRISM flies at an altitude of 28,000 feet above the coral reefs aboard a modified aircraft. According to Michelle Gierach, the CORAL project scientist at JPL, PRISM was specifically created for remote sensing of coastal and inland waters. PRISM records the spectra of light reflected upward toward the instrument from the ocean below, allowing researchers to pick out the unique details and properties of living corals, algae and sand. The ratio of coral to algae to sand is an indicator of the coral ecosystem's condition. When combined with information on the biological, chemical, and physical processes, these data can provide insight into how the whole ecosystem is functioning. Flying high in the air at more than 300 miles per hour to rapidly cover broad areas, Hochberg's team will survey the condition of an unprecedented extent of reef systems in the central and western Pacific. In September and October of 2016, the team surveyed six discrete areas of Australia’s Great Barrier Reef with a base of operation in the northern portion of the reef. Over the next year, the team will also survey reef systems in Hawaii, Palau and the Mariana Islands.

"Reefs respond in complex ways to environmental stresses such as sea level change, rising ocean temperatures and pollution,” says Hochberg. “We need accurate data across many whole reef ecosystems to develop an overarching, quantitative model that describes why and how reefs change in response to environmental changes.” For more updates from CORAL, and other NASA airborne missions, stay tuned to science.nasa.gov.

Watch this video to learn more.