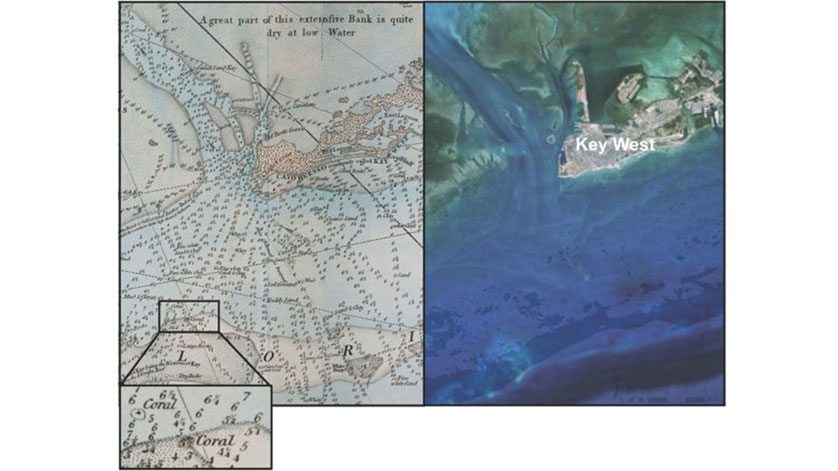 A new US and Australian study – including research from The University of Queensland and the Australian Research Council Centre of Excellence in Coral Reef Studies –compared early British charts to modern coral habitat maps to understand changes to reef environments.

Professor McClenachan said more than half of the coral reef habitat mapped in the 1770s was no longer there. In some areas, particularly near land, coral loss was closer to 90 per cent.

“We found near the shore, entire sections of reef are gone, but in contrast, most coral mapped further from land is still coral reef habitat today,” she said.

This estimate of change over centuries added to modern observations of recent loss of living corals.

The marine scientists measured the loss of coral reef habitats across a large geographic area, while most studies look more closely at the loss of living coral from smaller sections of the reef.

“We found that reef used to exist in areas that today are not even classified as reef habitat anymore,” Professor Pandolfi said.

“When you add this to the 75 per cent loss of living coral in the Keys at that finer scale, the magnitude of change is much greater than anyone thought.”

This work was undertaken while Professor McClenachan was a visiting researcher in Professor Pandolfi’s lab at UQ’s School of Biological Sciences in Brisbane, Australia, while on sabbatical from Colby College.

The research revealed the precision of the early maps. Postdoctoral researcher at the Bigelow Laboratory for Ocean Sciences in East Boothbay, Maine Dr Benjamin Neal said the early chart makers represented the “Silicon Valley of their time”. “They had the best technology and they used it to create new information that conferred a lot of power,” Dr. Neal said.

“The maps were essential to expansion of the British Empire, and luckily for us, they also included a lot of useful ecological information.”

Professor McClenachan said the findings had important conservation implications and pointed to a shifted spatial baseline.

“We tend to focus on known areas where we can measure change. That makes sense. Why would you look for coral where you never knew it was?” she said.

The authors said when large-scale changes like this were overlooked, scientists could lose sight of past abundance, lowering expectations for conservation and recovery.

The study, which also involved authors from Columbia University, National Museum of Natural History, Smithsonian Institution and the University of California San Diego, all in the U.S., is published in Science Advances (doi: 10.1126/sciadv.1603155)