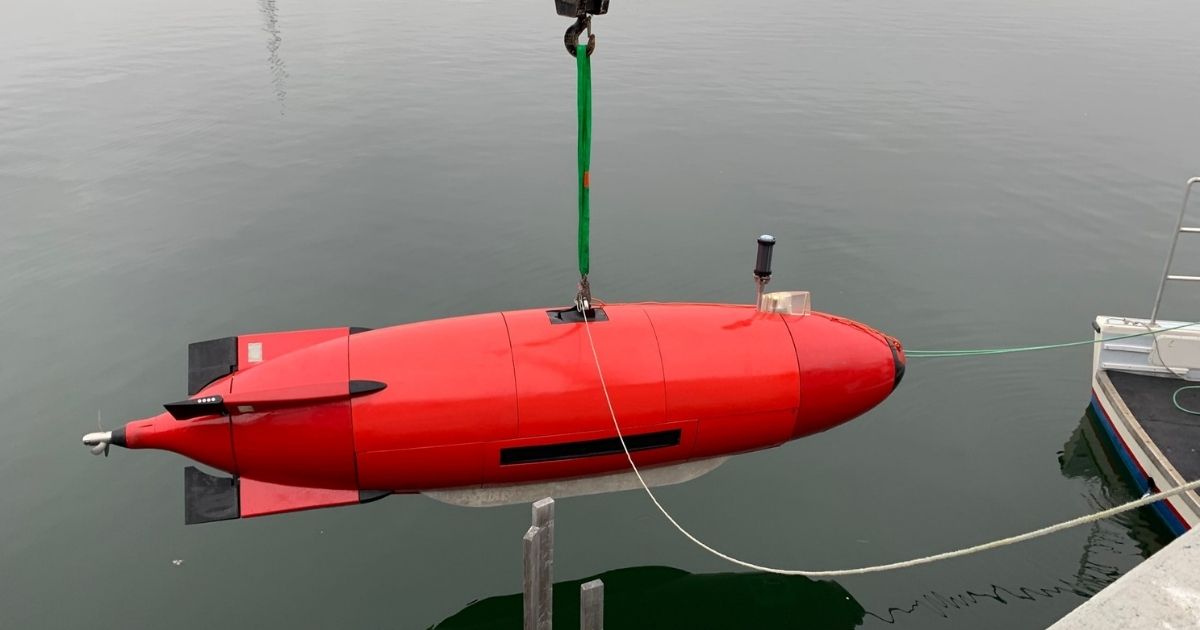 The DIVE-LD is also powered by Kraken’s pressure tolerant batteries.

Kraken’s MINSAS is a commercially available off the shelf configurable Interferometric Synthetic Aperture Sonar (SAS) which replaces high end side scan sonar systems at an affordable price, while delivering significantly higher resolution, range, and area coverage rates (ACR). The increased range and resolution and associated higher ACR of SAS over traditional systems offers a powerful capability when combined with the long range and endurance of the DIVE-LD.

Sea trials were conducted from March 29 to April 8, held in Shallow Water and Very Shallow Water environments, in and around Buzzards Bay, MA and Narragansett Bay, RI. Due to COVID travel restrictions, Kraken personnel provided support remotely throughout the integration and sea trials with the DIVE-LD. Immediately following successful sea trials, Dive was also able to conduct a number of customer demonstrations for commercial and defense customers.

Kraken MINSAS image of the wreck of the USS Yankee, collected on the DIVE-LD

“We are excited to see Dive equipping their AUVs with Kraken’s ultra-high resolution imaging and mapping capabilities, a milestone which also represents the 20th unique vehicle platform that has been successfully integrated with Kraken’s Synthetic Aperture Sonar,” said Kraken Senior Vice President of Engineering, David Shea. “Despite COVID limiting our onsite support, the speed and ease of integration of the MINSAS onto the DIVE-LD is a testament to the quality and experience of both the Kraken and Dive engineering teams. Within a short number of days, the Dive team had their vehicle in-water and collecting high quality sonar data, processed in real-time onboard the AUV. The high stability of the DIVE-LD has proven to be an excellent platform for the MINSAS 120 payload, and the open architecture and free flooded design allowed for simple and flexible payload mounting options.”

“Our team is incredibly excited to continue working with Kraken Robotics,” said Bill Lebo, Dive Co-Founder. “Following our previous successful sea trials with Kraken’s batteries, our team was keen to continue the positive momentum in our vehicle development with integration of Kraken’s latest generation MINSAS 120 sonar system. Over 7 days we completed 30 missions and collected 1.3 TB of sonar data, processed in real-time onboard the AUV. The incredible imagery produced allowed our team to quickly locate and identify a variety of objects in the testing area, including abandoned lobster traps previously hidden amongst a boulder field, a number of shipwrecks and customer-specific targets of interest. The imagery collected of the wreck of the USS Yankee was particularly impressive (see attached image). The use of Kraken’s removable data storage module, the DataPod, also enabled us to demonstrate time-critical data exfiltration at the conclusion of the test missions.”

Kraken and Dive Technologies entered into an agreement in August 2020 whereby Kraken agreed to supply subsea batteries for the DIVE-LD. Under the terms of the agreement, Kraken also acquired a license to build two DIVE-LDs for use in Kraken’s growing Robotics-as-a-Service (RaaS) business. Production of Kraken’s first DIVE-LD is currently underway with the first unit being manufactured in the United States. Kraken expects that it will be delivered to Kraken’s Unmanned Maritime Vehicle Facility in Dartmouth, Nova Scotia for sea trials this summer.