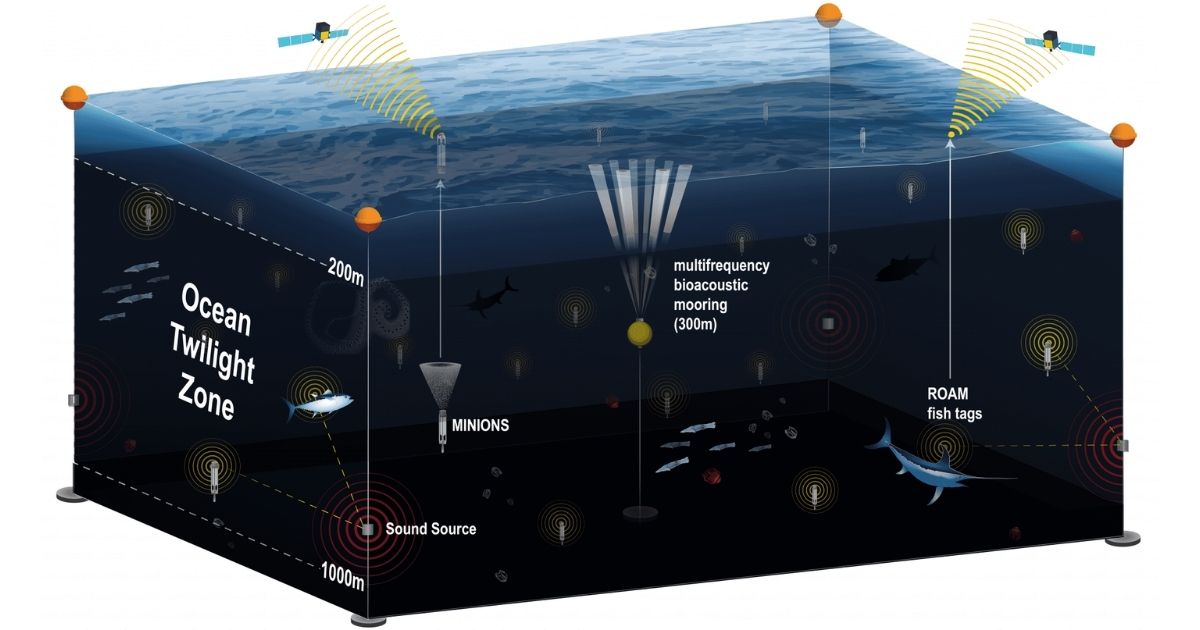 The ocean twilight zone, a dimly lit region roughly 200–1000 meters (650–3200 feet) below the surface, contains the largest amount of fish biomass on Earth—yet it remains largely unexplored by scientists.

A new observation network under development by the Woods Hole Oceanographic Institution (WHOI) seeks to change that. Encompassing 250,000 square kilometers (roughly 155,300 square miles) of the northwest Atlantic Ocean, the network will collect around-the-clock data about the twilight zone over months or even years, offering unprecedented insight into this little-known, yet vitally important region of the sea.

“It will cover a really huge piece of the ocean,” says WHOI ocean ecologist Simon Thorrold, a Principal Investigator for the network. “We’re used to going out for several weeks on a research vessel to study just a small area, and returning there maybe once or twice a year if we’re lucky,” Thorrold says. “Now, we’ll be able to get continuous measurements from a large chunk of the ocean twilight zone over significant periods of time. It’s very exciting.”

The network will give scientists a comprehensive view of the twilight zone, or mesopelagic, using several different technologies including moored buoys equipped with acoustic survey systems; a swarm of optical and geochemical sensors; and new fish-tracking tags that will continuously record the position of major predators such as sharks and tuna. All of these components will connect to the network’s buoys using acoustic signals underwater and an Iridium satellite link at the surface.

The information provided by the network will improve estimates of the density and distribution of fish and invertebrates in the twilight zone, reveal new insights about their interactions and daily migrations to and from the surface—and help fuel new strategies for conservation and policy making. The network will also help researchers better understand how the twilight zone affects carbon cycling and global climate, says WHOI marine radiochemist Ken Buesseler.

“Plankton—tiny plant-like organisms—at the surface remove carbon dioxide from the atmosphere as they grow,” Buesseler says. “When animals from the twilight zone migrate up to feed on those plankton and then return back to deeper waters, they take that carbon with them. The question is, how much does that natural cycle of life and death affect the amount of carbon that is sequestered in the deep ocean? And if humans start removing large numbers of fish from the twilight zone, how could that change?”

Buesseler compares the new observation network to a “field of dreams.”

“You build something like it, and all kinds of researchers will come and use it, because they’ve just never had the opportunity or infrastructure in place for them to be able to do these sorts of observations,” Buesseler says.

Also collaborating on the project are WHOI scientists Andone Lavery and Dana Yoerger, and Melissa Omond from the University of Rhode Island.

Former WHOI President and Director Mark Abbott says it would be challenging to fund this kind of multidisciplinary, large-scale, long-term marine infrastructure through federal sources. Abbott was instrumental in planning the observation network during his tenure. Instead of going through traditional funding channels, he turned to German philanthropist Otto Happel, whose interest in WHOI’s work in the ocean twilight zone led to a generous gift from the Happel Foundation.

“I think what’s really exciting about Otto is his deep appreciation and understanding and curiosity about the science, the engineering, and how this informs ocean policy,” Abbott says. “He’s concerned about all the changes we’re seeing in the marine environment, and he wants to fund work that enables people to make better decisions about the ocean.”

The Happel Foundation’s support will enable WHOI’s ocean twilight zone research team to turn their plans for an observation network into a reality. Work is already underway on sensors and other network components.

“The ocean always has been my passion, in many respects,” Happel says. “I’m thrilled that with a relatively small amount of funding, we can start to answer questions about it that may be vital to changing how we operate and how we live in this world.”