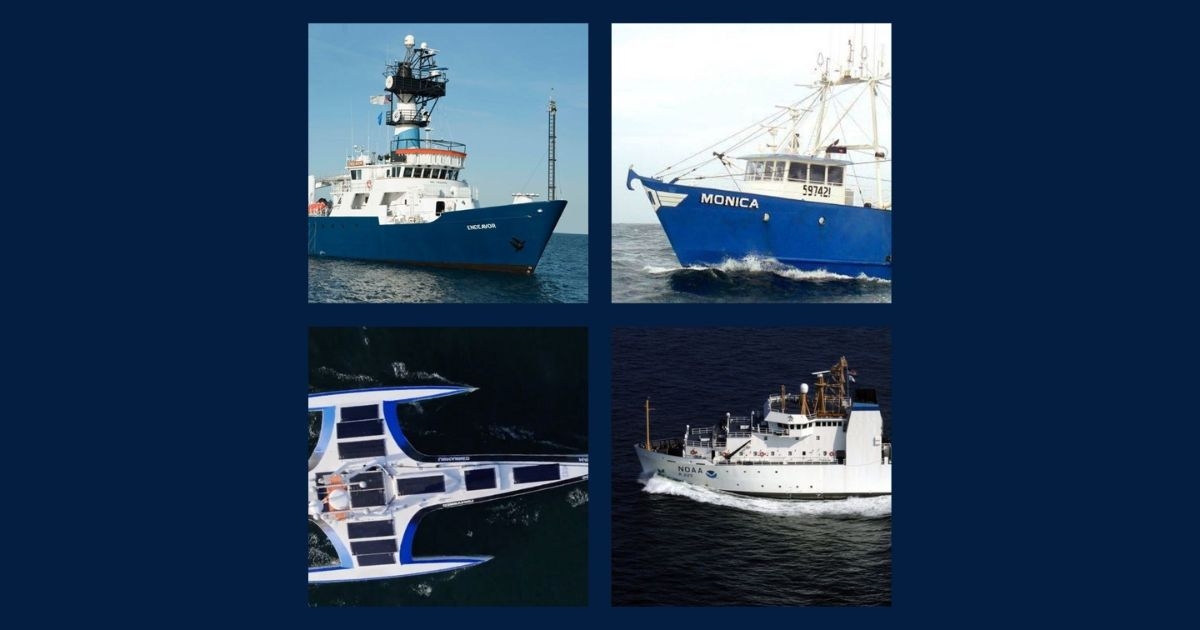 Scientists from Woods Hole Oceanographic Institution (WHOI), along with partners from National Oceanic and Atmospheric Administration (NOAA) and the University of Rhode Island (URI), have embarked on an unprecedented four-ship expedition in the northwest Atlantic to study the Ocean Twilight Zone (OTZ)—a dark, remote, and under-explored layer of the ocean that exists 200 to 1000 meters (650-3,300 feet) below the surface.

While at sea, the expedition will examine the inner workings of Diel Vertical Migration (DVM), a phenomenon in which trillions of organisms move from the twilight zone to the surface each night and return to the deep at sunrise. This migration, which is the largest on Earth, has a massive impact on marine food webs, and may also help to regulate the amount of atmospheric carbon that the ocean sequesters each year. This joint mission is the most comprehensive attempt yet to study the OTZ, and will include scientists aboard the NOAA ship Henry B. Bigelow, research vessel (R/V) Endeavor (operated by URI), the commercial fishing vessel F/V Monica, and an autonomous, AI-driven surface ship called the USV Mayflower 400.

The scientific team will deploy almost every tool it has developed to study the twilight zone over the last three years, including Mesobot, Deep-See, TZEx, ROAM tags, Stingray,  MINON floats, and environmental DNA samplers. This technology will be used in conjunction with the new Twilight Zone Observation Network, which includes a moored acoustic buoy that will continuously monitor the movements of marine organisms as they migrate up and down through the water each day, and several sound source moorings that let scientists accurately track positions of tagged apex predators and MINION floats in three dimensions. This full suite of technology will give researchers an incredible wealth of data.

Each ship will serve a different yet complementary purpose. The commercial fishing vessel Monica will be used to tag sharks and other large predators that dive into deep water to feed, helping the OTZ team understand these predators' behavior in the twilight zone. The Bigelow will characterize migrating fish and other organisms, viewing them with acoustic signals from the Deep-See to wed vehicle and capturing them for study using a sophisticated net system. On the Endeavor, scientists will measure the movement of carbon through the twilight zone, collect images of gelatinous animals with the Stingray tow sled, gather environmental DNA for analysis, and deploy Mesobot to capture video footage, still images, light data, and acoustic data.

The nimble autonomous Mayflower will then comb the waters that the other three ships studied, using onboard sonar and other instruments to collect data on the twilight zone. All the data collected by each vessel will be coordinated and cross-referenced with data collected from the other vessels.

The OTZ Project has been formally recognized by the United Nations as an endorsed project of the U.N. Decade of Ocean Science for Sustainable Development—a designation that gives scientists wider opportunities to collaborate and an enhanced ability to answer the twilight zone’s biggest mysteries.   Learn more about the Ocean Twilight Zone project and follow along on the mission here.