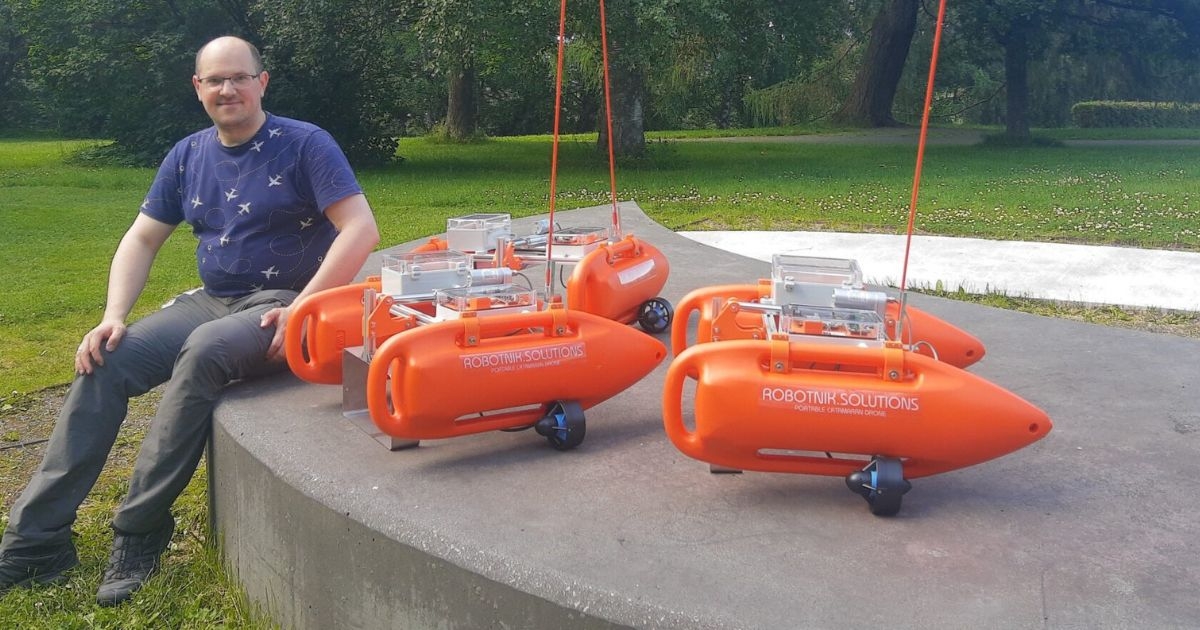 Artur Zolich is a postdoc at NTNU's Department of Engineering Cybernetics. He and collaborators from the Department of Biology have developed a robot water sampler they have called "Pamela". Photo: NTNU

NTNU biology and cybernetics researchers have built a robot that allows them to sample everything from microplastic to salmon lice densities.

"Pamela” is an uncrewed surface vehicle (USV) developed as an entrepreneurial idea at NTNU for sampling a variety of surface water particles, from microplastic to plankton to salmon lice. The USV is a joint effort by an interdisciplinary team – Andrea Faltynkova, a PhD candidate at the Department of Biology, and Artur Zolich, a postdoc at the Department of Engineering Cybernetics.

Faltynkova studies microplastics in the ocean. Microplastics are bits of plastic smaller than 5 mm, which is roughly the size of the end of a pencil. While researchers know that microplastics can have negative effects on marine or freshwater organisms, there’s less known about how they affect human health. But studying microplastics is a challenge because of the nature of the substance itself, she says. 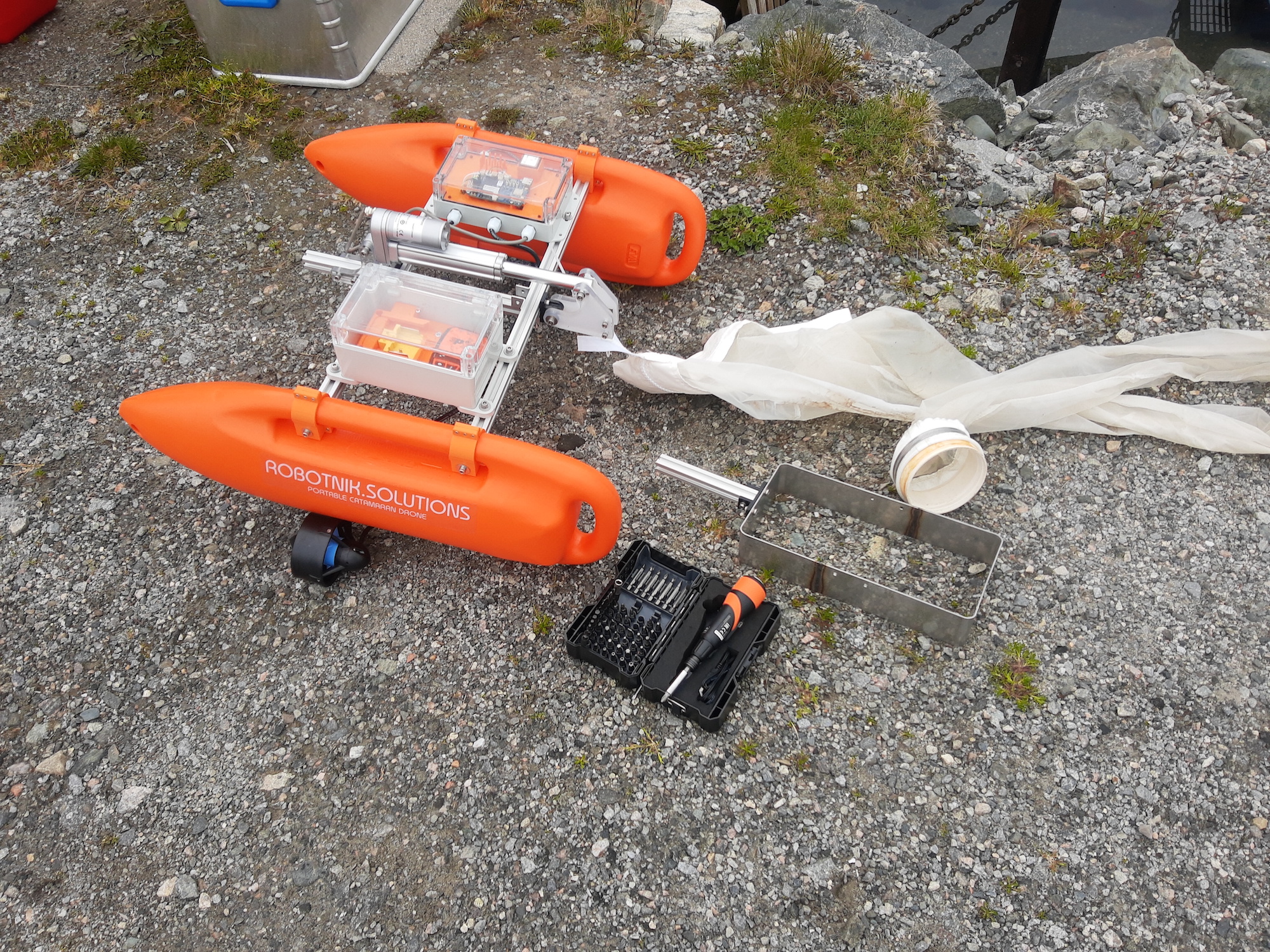 “Microplastics are so heterogeneous. It’s a very large, diverse group of particles. Not only that but they are very unevenly distributed. Microplastic is not like other dissolved pollutants that can be detected even in small quantities of water or soil. If you go and you take a liter from the sea, and there’s no plastic in it, can you conclude that there is no plastic in the sea?” she said.

“People go out with a boat and sample a few times, and then try to draw conclusions based on how much plastic they’ve picked up. But we really have no idea of knowing how good that estimate is.”

That’s what makes the vehicle, which is a little bigger than a robot vacuum cleaner, an especially welcome advancement in microplastic sampling.

Faltynkova’s main research project is to adapting and developing a technique called hyperspectral imaging to identify and count microplastic.  Hyperspectral imaging is a technology developed in the mid-1980s for studying the Earth from aircraft or from space. It’s now widely used in everything from studying underwater shipwrecks to identifying different human tissue types.

This type of imaging is also used by the recycling industry to separate plastics, making it a perfect tool to study microplastic.

This new method emphasizes simplicity and speed; all Faltynkova has to do is take a picture of her samples using a hyperspectral camera. The rest of the work is done by the computer model she’s built to process the images.  The IDUN computing cluster at NTNU allows her to quickly process large amounts of data to determine what types of plastics have been collected in the sample.

But then there’s the issue of collecting enough samples from the ocean so that she can say something meaningful about what she has found.
Enter Pamela.

Most microplastics sampling requires towing a net behind a boat at a very slow speed, which is both costly and time-consuming.
Faltynkova’s use of a hyperspectral camera to catalogue different types of plastics quickly and efficiently from her samples means that she can study a lot of samples.  Pamela’s low cost and ability to work independently means that Faltynkova can use it to collect multiple of samples quickly.

“What I’m trying to do is enable fast analysis (with hyperspectral imaging), paired with a method that allows fast sampling,” she said. “That together is what’s really going to increase the overall ability for us to effectively map and monitor plastic pollution.”

Pamela, buoyed by its two big orange floats, just like the ones from the popular TV series Baywatch, can travel a pre-programmed course without the need for a researcher to follow along or supervise the vehicle as it does its job, says Zolich, who invented the robot. 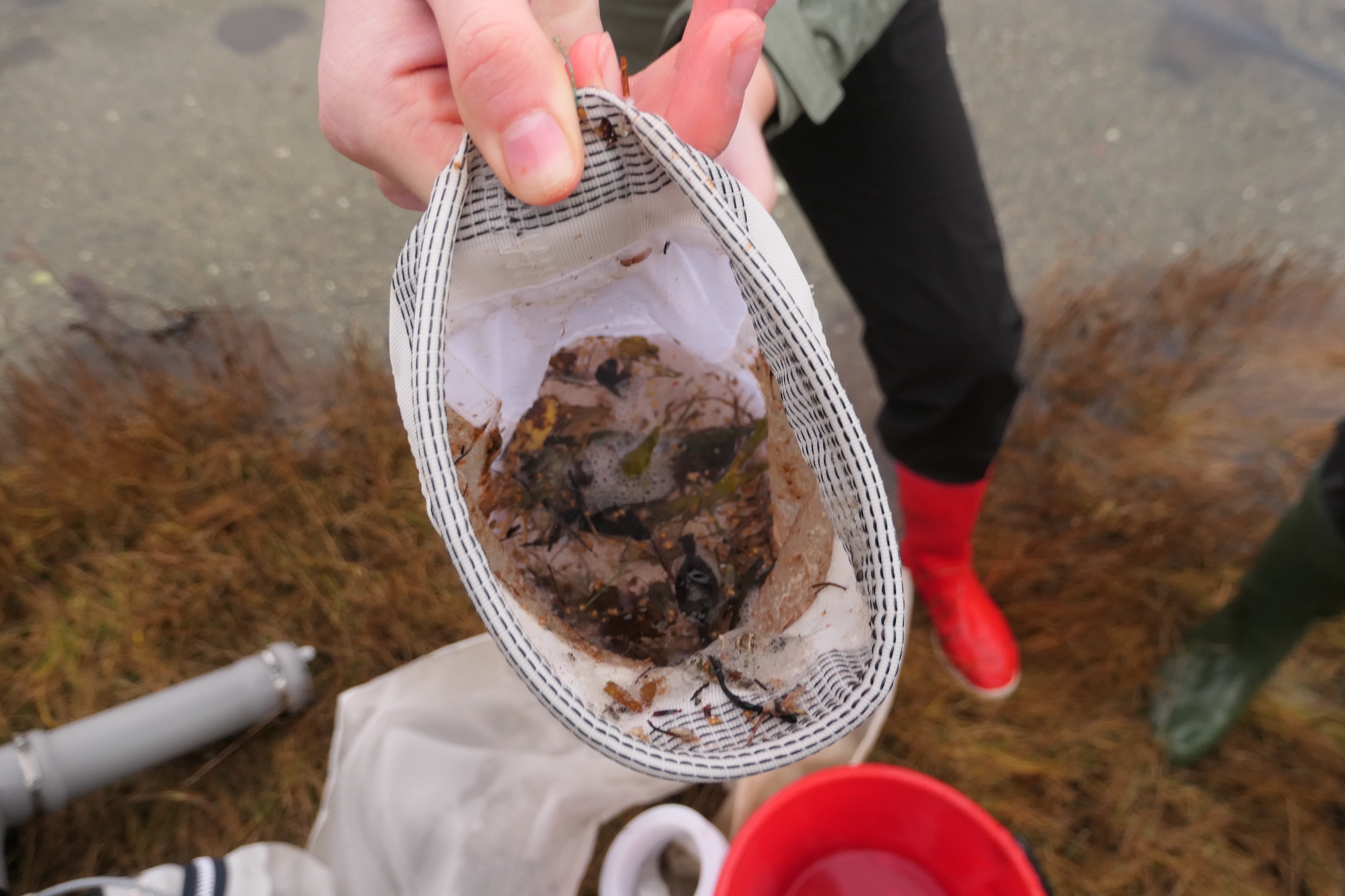 Here’s an example of the kinds of things that Pamela’s net can collect. The biological material can be washed away, leaving microplastics that can then be photographed using a hyperspectral camera. Photo: Andrea Faltkynova/NTNU

Faltynkova and Zolich’s collaboration was initiated by NTNU biologist Geir Johnsen and has been supported by Tor Arne Johansen from the Department of Engineering Cybernetics. Johnsen and Johansen are both key scientists at the Centre for Autonomous Marine Operations and Systems (AMOS).

“I like building things that solve a problem,” says Zolich, who worked for several years in the industry before returning to academia to do a PhD and then a postdoc. The problem to solve, in this case, was helping Faltynkova with her microplastic sampling.

Pamela is designed around real-life user needs and continues to evolve in response to feedback from early adopters. Its advanced system architecture uses affordable, consumer-grade, commercial-off-the-shelf (COTS) components where possible and uses rapid prototyping components for custom parts. The combination makes the robot convenient to use and easy to improve.

“This vehicle is very modular,” Zolich said. “It can be specialized in many ways. I envision it becoming more specialized based on what researchers want to sample.” 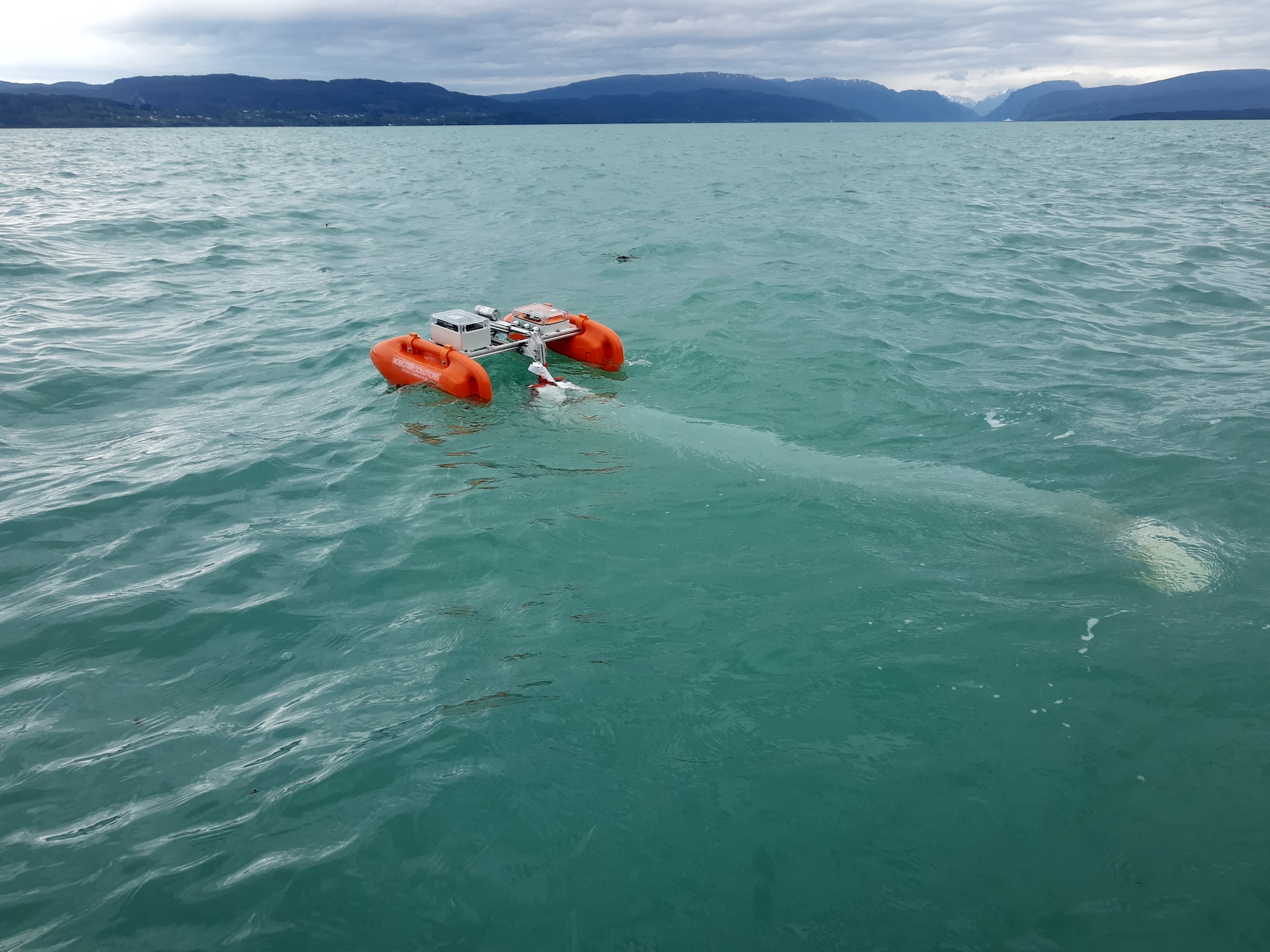 Here’s what Pamela looks like in action, in this case, sampling for salmon lice in Hardanger Fjord. Photo: NTNU

Among the other advantages of the vehicle are that it can be operated independently from a boat or from the shore, which means there is no boat wake to affect its ability to collect water samples. Pamela can be easily used by researchers travelling to remote locations. It fits check-in luggage, its batteries can be carried on an airplane, so researchers don’t have to worry about shipping the sampler ahead.

The robot is being developed with a Discovery innovation grant of NOK 200 000 from NTNU’s Technology Transfer Office. For the last 6 months Zolich and Faltynkova have worked with a team from TTO to investigate the USV’s  market potential, intellectual property matters, robot design, and future business strategies.

When Faltynkova’s marine biology colleagues saw Pamela, they immediately began to ask if it could be adapted to their work. She uses the robotic vehicle to tow a kind of net that is commonly used by biologists, called a plankton net, to collect surface water samples for microplastics. 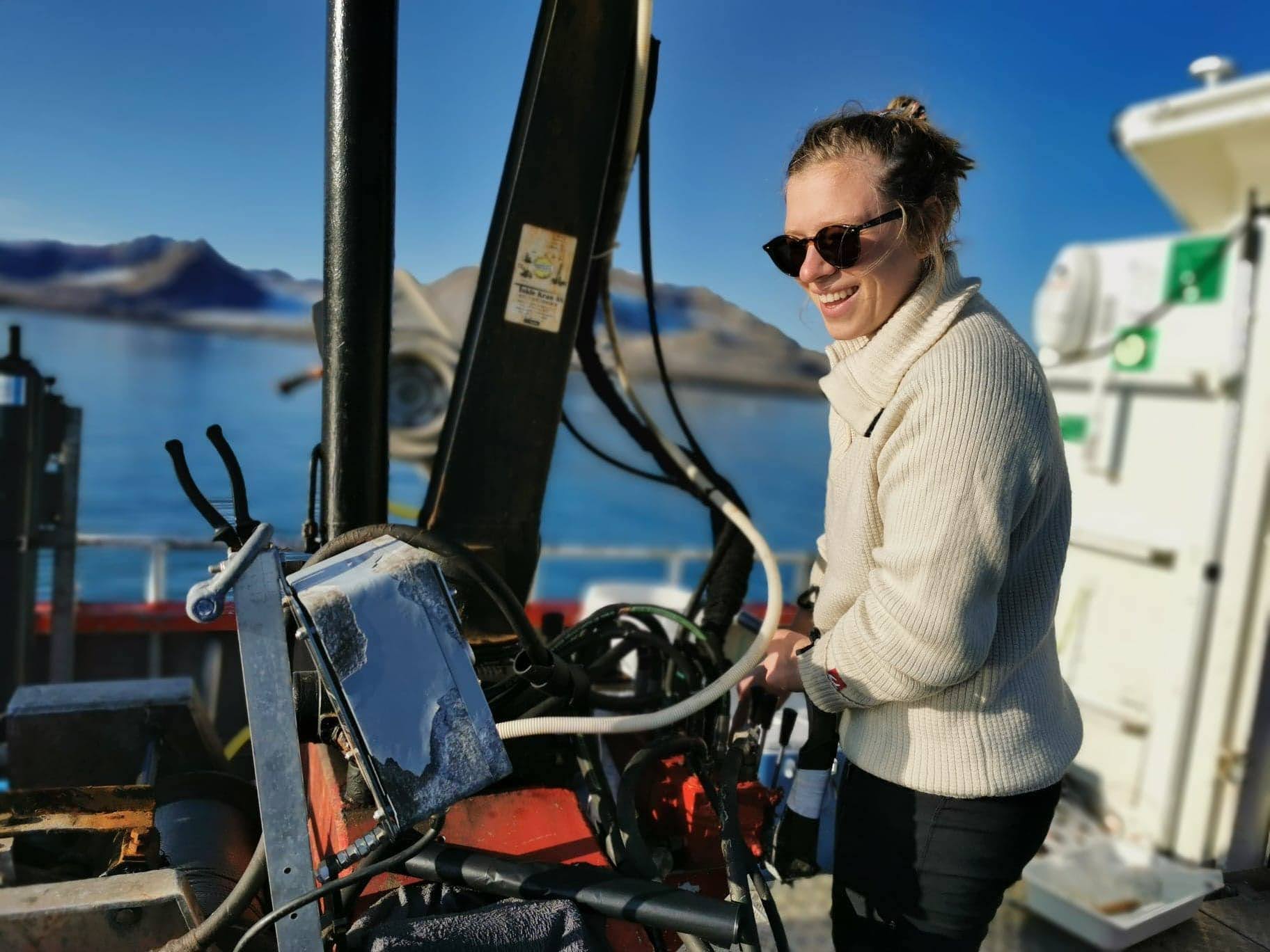 The robot has been officially presented to a wider audience at the 9thNorwegian Environmental Toxicology Symposium and at a workshop for microplastic researchers in Athens, Greece. The researchers have also been contacted by international groups, including the Dutch NGO The Ocean Cleanup and the California State Water Resources Board.

Pamela is currently being tested to sample salmon lice as part of a larger study conducted by NTNU and researchers from the Norwegian Institute of Nature Research. The researchers, including Professor Bengt Finstad and PhD candidate Nathan Mertz, have developed a passive sampler to look at salmon lice larvae concentrations — which is the stage at which they spread most widely. Zolich shifted the location of the sampling net on Pamela so that it can sample salmon lice too. It is now being tested along with the passive samplers.

“We see that our robot can greatly reduce fieldwork sampling costs and improve research quality with more samples,” Zolich said. “We are very open to expanding our collaboration network and  are actively looking for researchers and institutions that would like to try our robot in their work.”

You can read more about Pamela here.