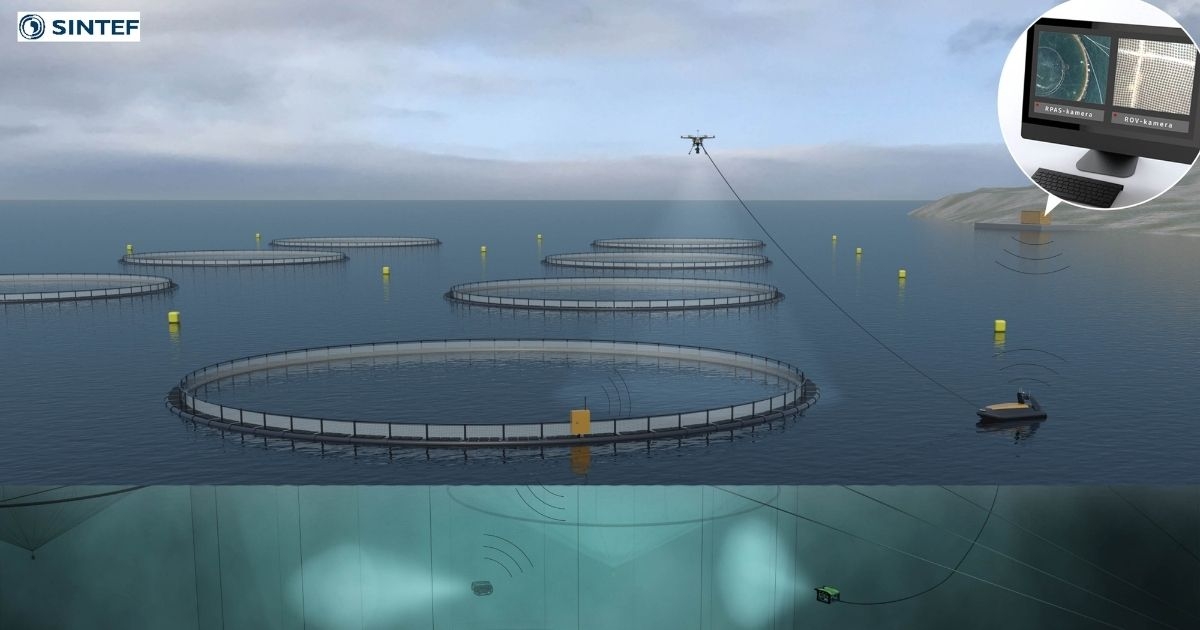 Future aquaculture operations: projects such as Artifex, Exposed and CageReporter are providing the groundwork for a revolution in fish farming. Operations could be carried out autonomously using ROVs, unmanned surface vessels and drones controlled from shore. The ROV could be used inside or outside the net in future, but has only been tested inside the cage so far. (Illustration courtesy of SINTEF Ocean AS.)

Norwegian researchers are working on projects that are providing the groundwork for a revolution in aquaculture. As a small part of this revolution, Nortek’s DVL is helping to bring autonomous navigation to ROVs used in Norwegian fish farms.

Fish farming is a multi-million-dollar business that depends on careful maintenance of the giant cage nets to prevent stock from escaping through gaps and to reduce biofouling on the nets that can affect fish health.

Detailed inspections, which are crucial to this process, used to rely on sending divers down to check the nets. But that’s a cumbersome and time-consuming process, not least because there is a lot of netting to check – a fish farm cage is typically around 50 m across and 30 m deep.

Today, remotely operated vehicles (ROVs) equipped with a camera and sensors do a lot of the inspection work. But these must be steered via a tether from the surface by a skilled pilot, whose attention is split between navigating the vehicle accurately around the edge of the cage – with control over little more than depth and heading – and doing the inspection itself.

If the operator could spend more time on the inspection, rather than navigation, the job could be done more quickly and efficiently. So, scientists from Norwegian research institute SINTEF hit on the idea of simplifying the task by developing a prototype inspection ROV with a high degree of autonomous navigational capability.

“If you can make the ROV ‘fly’ along the net autonomously, then the pilot can concentrate more on inspecting the quality of the net and deploying analytical equipment that is more complex to operate,” says Walter Caharija, a research scientist at SINTEF Ocean.

He led the project, known as Artifex (RCN project no. 256241), which built on the pioneering work of former SINTEF researcher Per Rundtop.

The team was able to carry out research in a fully operational commercial fish farm, known as the SINTEF ACE full-scale laboratory, which is located off Trondheim, the Norwegian city where the institute is based. Trondheim is a major center for the fish-farming industry. 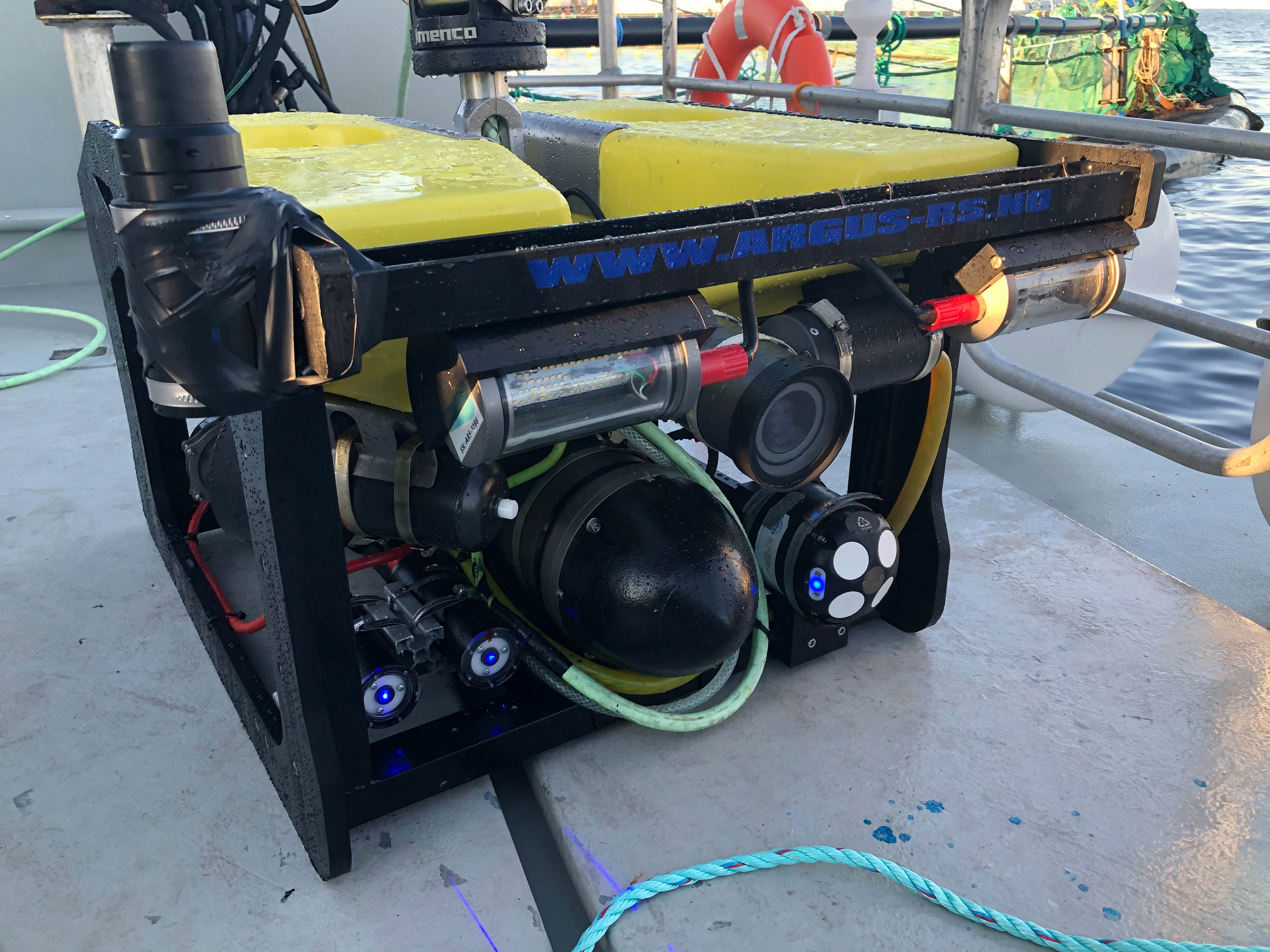 So how do you to get the vehicle to track the contours of the net from a fixed distance as it travels around the inside of the cage? This requires more than just knowing where the ROV is in the water. The vehicle also needs to know exactly where it is in relation to the net, which is constantly moving. That requires technology that can detect the net and accurately gauge the ROV’s distance from it, as well as calculating the vehicle’s speed along the net.

The team that carried out the early work thought using a Doppler velocity log (DVL), horizontally mounted on the frame of the ROV, could be the solution. But they weren’t sure whether a DVL would be capable of “locking on” consistently to a surface as ill-defined as a fish net.

The researchers got in touch with Nortek to see what was possible. Nortek said it was confident that its DVL1000 instrument would be able to “see” the net as it moved along the circumference of the cage – and that indeed turned out to be the case.

The DVL is part of a package of navigational aids, which Walter Caharija describes as a “sensor fusion”. Ultra-short baseline acoustic positioning (USBL), compass readings, a laser system and the on-board camera all contribute location data. But, in terms of maintaining distance from the cage net, it is the DVL that does the work.

Caharija says the Nortek DVL has done the job well. The team used laser measurements to verify those from the DVL and they confirmed its accuracy.

“Nortek is one of the most innovative companies when it comes to subsea technology, especially the DVL. They do a lot of development in-house that makes the instruments very reliable,” he adds. 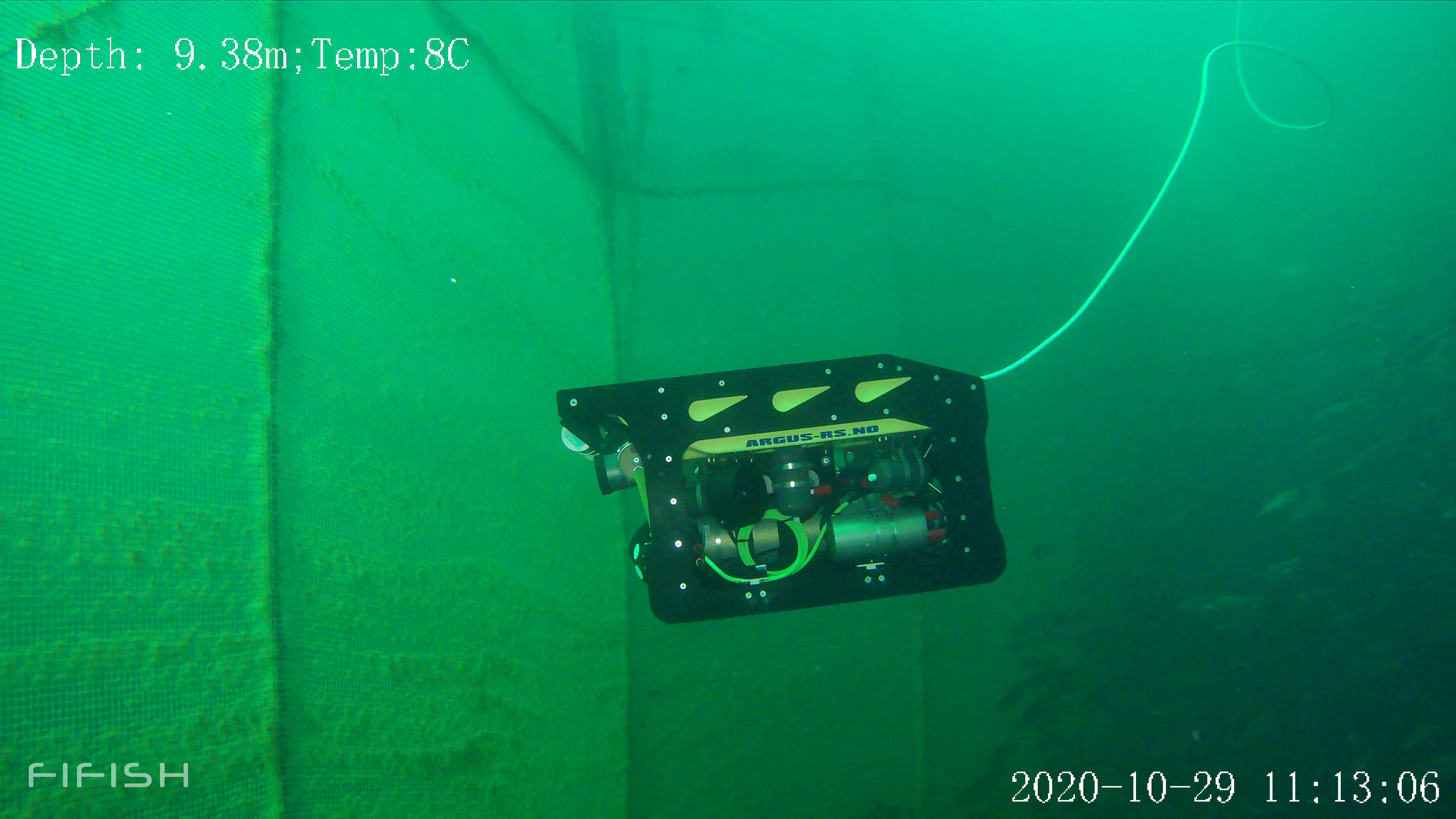 The Nortek DVL mounted on the Artifex ROV during trials. The DVL transducer windows are visible bottom left, facing the net. (Photo courtesy of SINTEF Ocean AS.)

Artifex and its successor projects are part of a drive with much wider ambitions. They could pave the way for completely unmanned fish farms, with monitoring and repair controlled remotely by personnel based on land, and repairs carried out by ROVs, rather than divers, as is the case now.

The Artifex team also aims to fit the ROV with a robotic arm to carry out net repairs, while the project partners are developing an unmanned surface vessel (USV) to which an ROV could be tethered, along with a drone to assist inspections.

Moving fish farms further offshore is a growing trend as farmers seek to meet growing global demand for fish. So the next step for the researchers is to move away from the relative calm of near-shore fish farms to test the ROV in deeper, rougher waters.

The SINTEF team are doing this as part of the Exposed project (RCN CRI, project no. 237790/O30), a joint venture between academic researchers, aquaculture companies and technology firms to develop new, low-cost techniques for many aspects of fish farming in more exposed locations.

In calmer waters close to shore, a vessel can be attached to the net, making interaction with the ROV to which it is tethered relatively straightforward. However, in more exposed locations with rougher seas, it may not be safe to attach the vessel to the net, making the process of keeping it on station above the ROV a lot more complicated.

"In those conditions, tasks such as the launch and recovery of the ROV can be as big a challenge as actually operating it underwater," says Herman Biørn Amundesen. 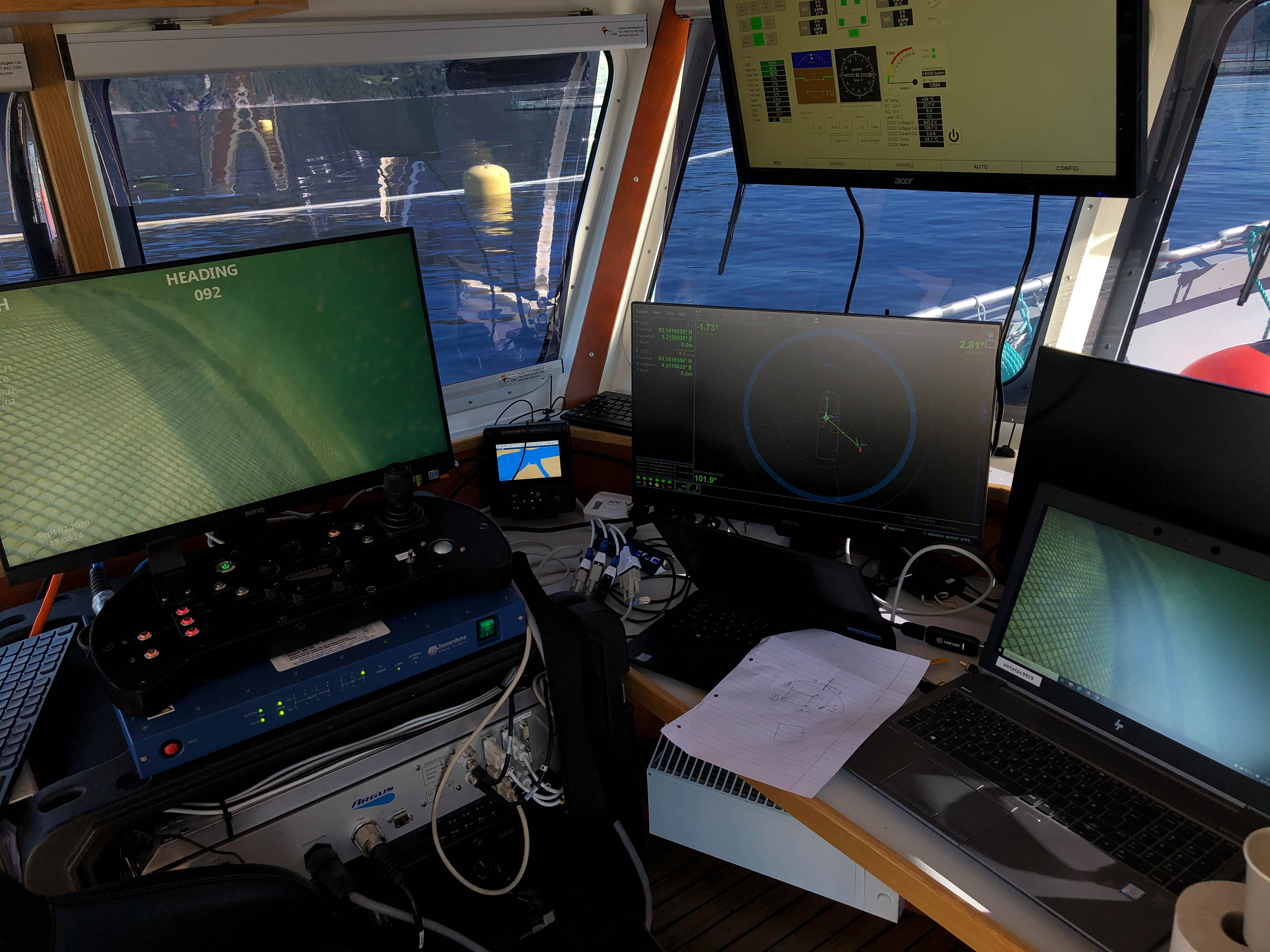 The ROV is currently controlled from a vessel on the fish farm. A control room on land in wireless communication with an autonomous ROV is envisaged for the future. (Photo courtesy of SINTEF Ocean AS.)

In practice, these added complications mean ROV missions in exposed fish farms are more vulnerable to being cut short by a closing weather window. This, in turn, makes any extra time that can be devoted to net inspection an even more precious commodity, accentuating the benefit of autonomous navigation using the DVL. Time is money for aquaculture companies – the more you can get done in a shorter time, the lower the cost.

Providing the groundwork for a revolution in fish farming

SINTEF is also working on a related project, CageReporter (RCN project no. 296476). Its main objective is to develop sensor systems for high-quality data acquisition from within fish-farming cages using autonomous and non-tethered vehicles, and the transmission of the data acquired to land.

These projects are providing the groundwork for a revolution in fish farming. They should help the industry to produce fish for expanding world markets at low cost in a wider range of environments, and with rapid access to more detailed information on fish health, fish welfare, water quality and cage integrity.