New Study Reports that Tropical Cyclones are Dropping in Number 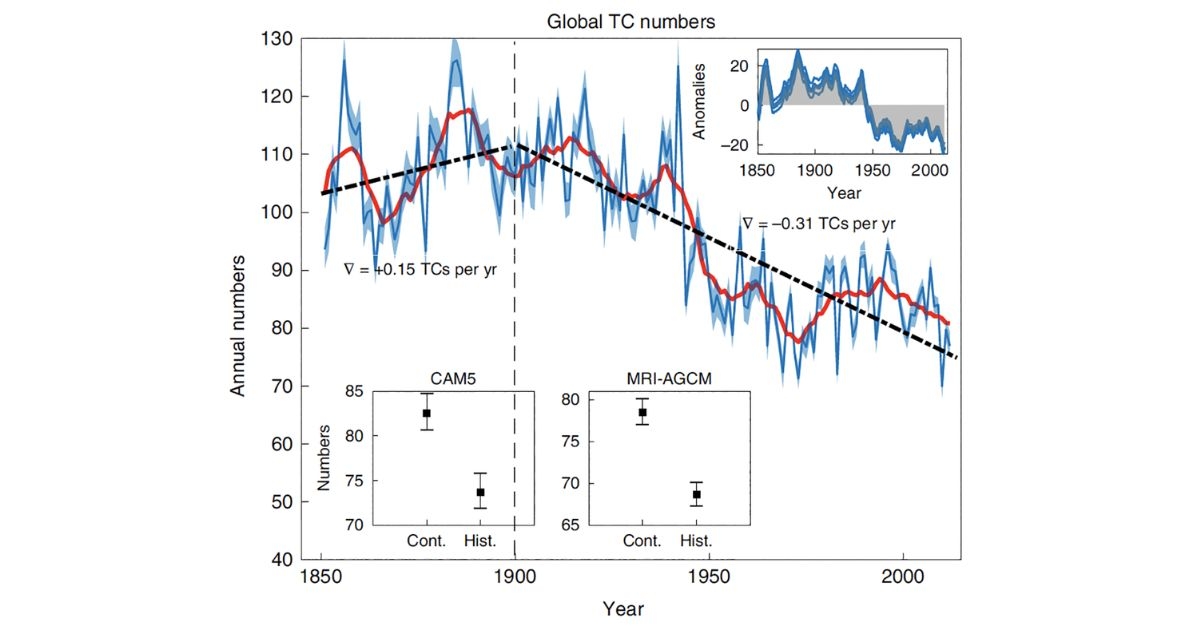 A new study based on reanalysis data finds that tropical cyclones (also known as hurricanes) have been decreasing in number since the beginning of the 20th century. Image Chand et al., Nature Climate Change 2022

Researchers have for the first time shown that the annual number of tropical cyclones dropped during the 20th century compared with the late 19th century, according to a study published in Nature Climate Change.

Using historical records and model data, the paper — co-authored by Suzana Camargo, an extreme weather expert from the Columbia Climate School’s Lamont-Doherty Earth Observatory — shows the number of storms decreased by about 13 percent in that period in both global and regional scales.

The study authors cautioned, however, that frequency was only one aspect controlling the risks associated with tropical cyclones; these storms have been increasing in intensity in recent decades, and may also be shifting closer to coastal areas inhabited by growing populations.

Tropical cyclones are massive low-pressure systems that form in tropical waters when the underlying environmental conditions such as sea surface temperature and wind shear are right. These include extreme rainfall and winds, and coastal hazards such as destructive waves, storm surges, estuarine flooding, and coastal erosion.

It is not clear how tropical cyclones change under human emissions because a warming ocean is expected to intensify storms, while some changes in atmospheric circulation are thought to prevent storm formation. Providing historical context is challenging, as observational records are not complete, especially before 1950.

Though there have been studies with short-term data, these have resulted in conflicting conclusions on how tropical cyclone numbers will change as a result of global warming.

“The problem with looking at trends in any tropical cyclone characteristics like cyclone frequency, tropical cyclone intensity, or how the distributions may look, you need long-term data,” said lead author Savin Chand of Federation University Australia.

Before the advent of satellites, which provide the most reliable and consistent way to study tropical cyclones, the record is incomplete. “Only hurricanes that affected people’s lives were known and reported,” explained Camargo.

She added that the new study attempts to overcome this blind spot by instead relying on surface pressure data, which were collected more uniformly and over many years by weather stations and ships. The scientists ran this pressure data through a climate model to simulate hurricanes since 1850.

Using the reconstructed record and climate model data, they were able to reveal declining trends in the annual number of tropical cyclones since 1850 at both global and regional scales. For most tropical cyclone basins, this decline has accelerated since the 1950s when the warming became unprecedented.

The most recent finding shows, however, that hurricane numbers in the North Atlantic basin had increased in recent decades. This could be because the basin was recovering from a decline in tropical cyclone numbers due to human-related aerosol emissions in the late 20th century. The number of annual storms is still, however, lower than in pre-industrial times.

These findings support studies that suggest that current climate change leads to a decrease in the number of tropical cyclones.

“This study is one more piece of information on this debate. In my view, only a more comprehensive understanding of genesis will ‘settle’ this debate, so we are talking of years of research and many papers, not one single paper,” she said.

Adapted from a story by Federation University Australia