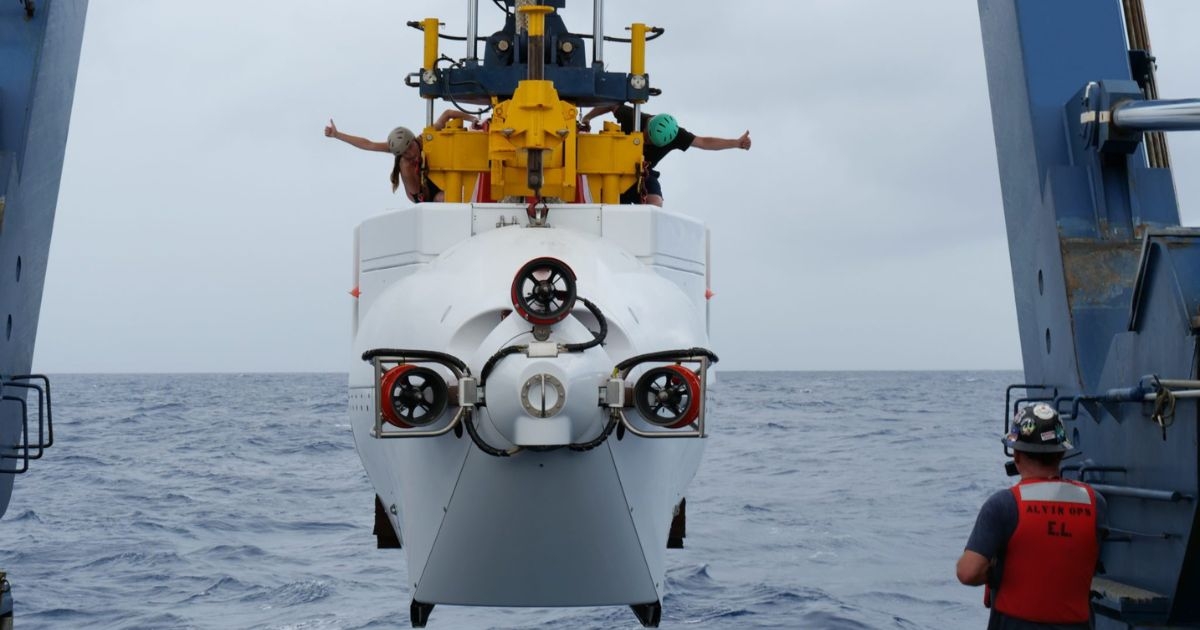 The human-occupied submersible Alvin made history when it successfully reached a depth of 6,453 meters (nearly 4 miles) in the Puerto Rico Trench, north of San Juan, P.R. This is the deepest dive ever in the 58-year history of the storied submersible.

The dive was a critical step in the process of achieving certification from the U.S. Navy to resume operations after an 18-month overhaul and upgrade that extended the sub’s maximum dive rating from 4,500 meters (14,800 feet) to its new limit of 6,500 meters (21,325 feet). Naval Sea Systems Command (NAVSEA) requirements stipulate the certification dive be between 6,200 and 6,500 meters.

The added range puts roughly 99% of the seafloor within reach of the world’s longest-operating, most active, and, by many measures, most successful human-occupied submersible program in the world.

This success comes after test dives were temporarily halted in November 2021 when a post-dive visual inspection revealed damage to several attachment points of the specialized syntactic foam used to provide buoyancy to the 43,000-pound submersible. The Alvin team has spent the past several months working to ready the sub to dive again, setting sea in early July for a new round of tests.

“Investments in unique tools like Alvin accelerate scientific discovery at the frontier of knowledge,” said WHOI President and Director Peter de Menocal. “Alvin’s new ability to dive deeper than ever before will help us learn even more about the planet and bring us greater appreciation for what the ocean does for all of us every day.”

Alvin is one of the most recognized and the most widely used deep submergence vessels in the world and the only one in the U.S. capable of carrying humans into extreme ocean depths and conducting complex scientific study of the deep ocean and seafloor. Today’s dive means the sub has completed 5,086 successful dives, more than all other submersible programs worldwide combined. It is named after the WHOI physicist and oceanographer Allyn Vine, who first championed the idea of building a human-occupied submersible to support deep-sea research, was originally constructed by WHOI engineers in 1964, and has been operated by the Institution ever since. On average, it conducts about 100 dives per year on missions to study the processes that create and shape Earth's crust, the chemical conditions that support life in extreme environments, and the vast diversity of life in the deep sea. 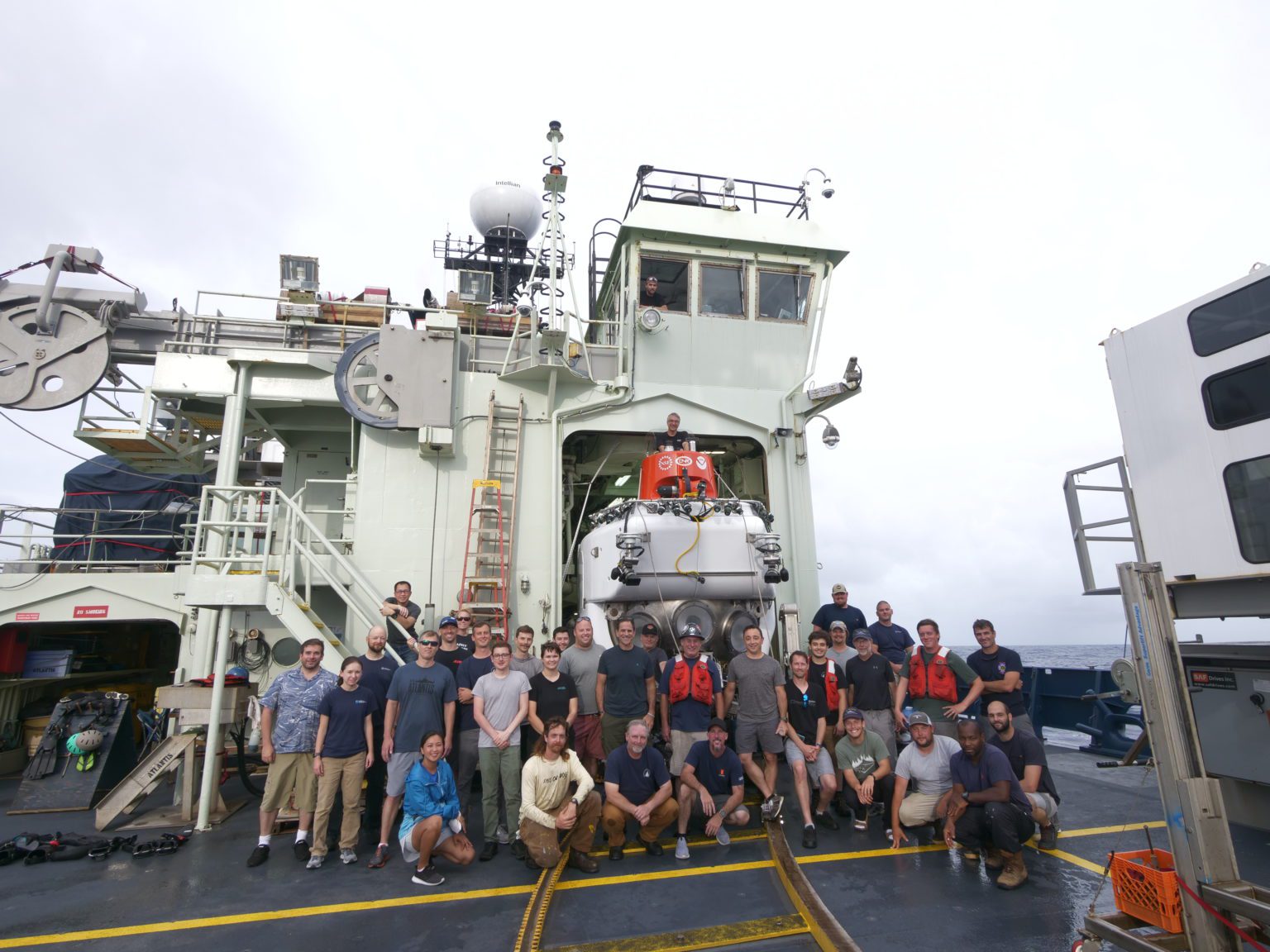 July 21, 2022: the Alvin team on the deck of the R/V Atlantis after Alvin's historic dive. Earlier, the submersible reached 6,453 meters, its deepest dive ever. Image by: Ken Kostel/ © Woods Hole Oceanographic Institution

In 1974, Alvin played a central role in Project FAMOUS (French American Mid-Ocean Undersea Study) to verify aspects of the then-new theory of plate tectonics. Three years later, scientists diving in Alvin rewrote modern understanding of life on Earth when they discovered hot, chemical-rich water flowing from the seafloor and supporting entire ecosystems independent of sunlight at the surface. In 1986, Alvin made one of its most iconic expeditions when WHOI scientist Robert Ballard used it to explore the wreck of HMS Titanic.

“For almost 60 years, the deep-submergence vehicle Alvin has unveiled the ocean’s mysteries—not just for military and national security purposes but also for the scientific benefit of society as a whole,” said Chief of Naval Research Rear Adm. Lorin C. Selby. “The Office of Naval Research is proud of its history with Alvin and Woods Hole Oceanographic Institution and looks forward to future discoveries and innovations. Welcome back, Alvin!"

Over the years, Alvin has transported more than 3,000 people into the depths and has supported publication of countless peer-reviewed scientific studies. It has also enabled development of new tools to further oceanographic research and has fostered the careers of many young scientists and engineers.

“The Alvin team at WHOI again demonstrated why they are world leaders in deep submergence technology with this momentous achievement,” said Brian Midson, Program Director for Submersible Support at the National Science Foundation (NSF), which largely funded the upgrade. “It is exciting that Alvin will now extend its support of researchers making discoveries in the least visited places on the planet for generations to come.”

The Alvin Group is based at WHOI and supports all aspects of the sub’s operations, including maintaining and piloting the sub, integrating new scientific sensors and instruments for specific missions, and designing and building new parts and new tools to extend its capabilities. Alvin is part of the NSF-funded National Deep Submergence Facility at WHOI that also includes the remotely operated vehicle (ROV) Jason and autonomous underwater vehicle (AUV) Sentry.

In March 2020, Alvin returned to Woods Hole, where WHOI engineers completely disassembled the sub as part of a regularly scheduled maintenance period. At the same time, they completed an upgrade process begun in 2011 to extend the sub’s depth range. The added depth will give scientists direct access to the ocean’s abyssal and upper hadal zones. This under-studied and poorly explored region is expected to be home to new species and to offer new insight into the connections between the deep ocean and the surface of the planet, as well as the physical, chemical, and biological processes that make life on Earth possible.

For the past three weeks, Alvin underwent a series of tests as part of its sea trials, overseen by the NAVSEA, which designs, builds, and maintains U.S. Navy ships and submarines. These included tests of its mechanical and electrical systems and its ability to operate safely at depth. The process concluded with certification to resume operation and to dive to its new maximum depth.

“Being able to work with the Woods Hole and ONR team to certify Alvin has been an honor for us,” said NAVSEA’s Commander Vice Adm. Bill Galinis. “At NAVSEA, we like to say we expand the Navy’s warfighting advantage, but with Alvin, we are now expanding scientist’s ability to learn more about inner space thanks to our world-class engineers and deep submergence expertise.”

The next step in Alvin’s post-overhaul schedule is a two-week, NSF-funded science verification expedition departing San Juan, Puerto Rico, on July 25 led by WHOI engineer and chief scientist of the NSF-funded National Deep Submergence Facility Anna Michel and University of Rhode Island geologist Adam Soule. During the trip, scientists from a wide range of disciplines will evaluate the sub’s ability to support deep-sea scientific research. Upon successful completion of the expedition, the science team will declare Alvin ready to return to service.

“A great many people have made it possible for Alvin to come this far,” said de Menocal. “To all of them I say thank you and congratulations. This is yet another milestone in Alvin’s long history of success.”

Alvin by the Numbers