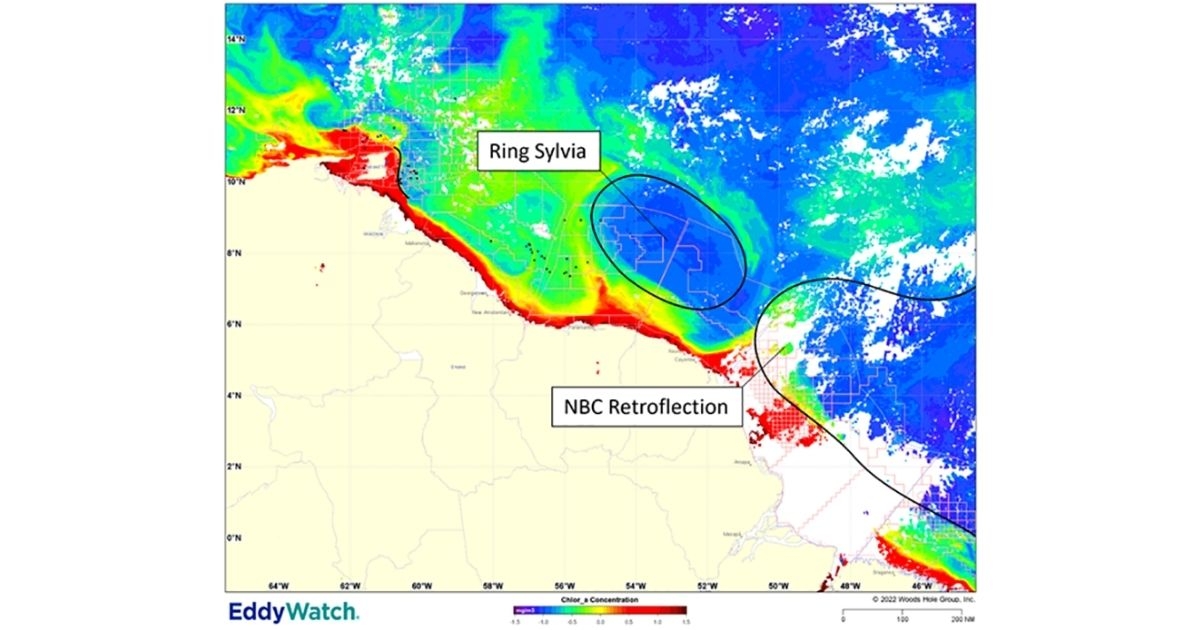 Satellite ocean color image of Ring Sylvia and the NBC Retroflection on January 18, 2022.

Sylvia* Alice Earle, Ph.D., is an American marine biologist, oceanographer, author, and lecturer known for her research on marine algae and threats to marine life, such as overfishing and pollution.

WHG’s EddyWatch team utilizes satellite imagery, drifting buoys, and rig-mounted current meters to monitor the location and current intensity of NBC rings. Over the next couple months, Ring Sylvia will migrate westward to west-northwestward along the coastline of Suriname and Guyana and impact active oil and gas facilities in the area. WHG has begun to issue daily forecasts to assist operators with planning safe and efficient operations in and around strong currents. 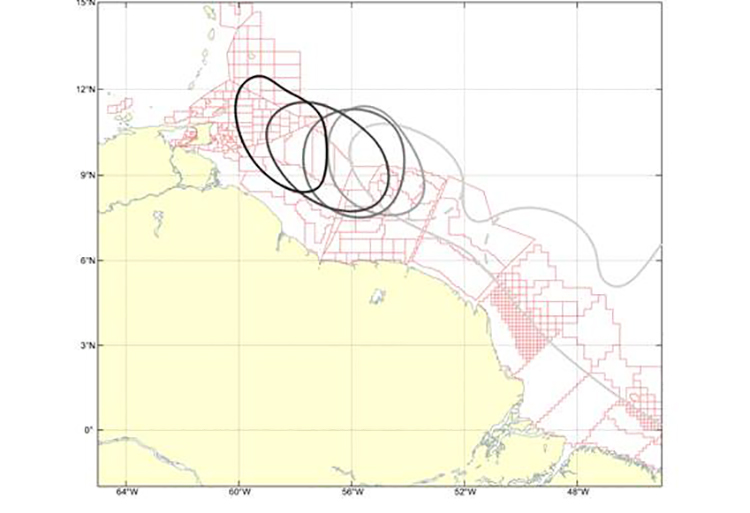 More about the NBC System

The NBC is the swift northwestward-flowing current that forms where the westward-flowing Atlantic South Equatorial Current (SEC) hits the coast of Brazil around 5°00’S. Offshore French Guiana, the NBC turns back on itself to form the eastward-flowing North Equatorial Counter Current (NECC). Five to eight times each year, the NBC retroflects so severely that it pinches and forms a closed circulation of water that may ultimately detach as a distinct anticyclonic eddy, referred to as a ‘ring’ in this region. Over a span of several months, NBC rings propagate northwestward towards the Caribbean (Figure 2), propelled by the momentum of their circulation which is strongest along the southern and western portions.

NBC rings migrate at speeds between 9 and 22 km per day, remain intact up to ~150 days, and range between 250 and 550 km in diameter. Currents within these rings circulate clockwise, and surface current intensity can exceed 1.0 m/s (Figure 3). Significant subsurface currents associated with these rings can extend as deep as 400 m. Their structure begins to disintegrate as they encounter Trinidad, Tobago, and the Windward Islands, with their energy ultimately filtering in between the islands and into the Caribbean Sea. 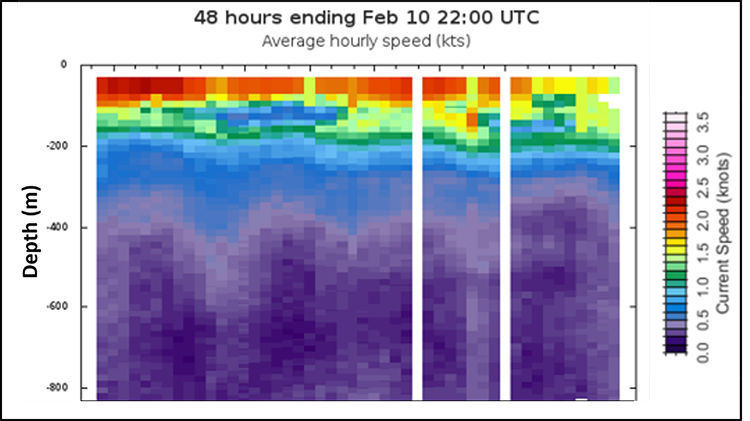 Data collected from a rig-mounted current meter as an NBC ring overran an oil and gas site offshore Guyana.

A seasonal cycle is observed in the formation and migration of NBC rings with the deepest, strongest rings forming in the boreal fall and winter months (October to February) when the NBC transport is at its strongest and deepest. In contrast, the rings shed in the spring and summer months (March to September) tend to be weaker and shallower and disintegrate quickly, diminishing to a moderately elevated west-northwestward flow that gradually migrates toward Trinidad and Tobago. In the absence of a ring, a weak northwestward flow is typically observed.