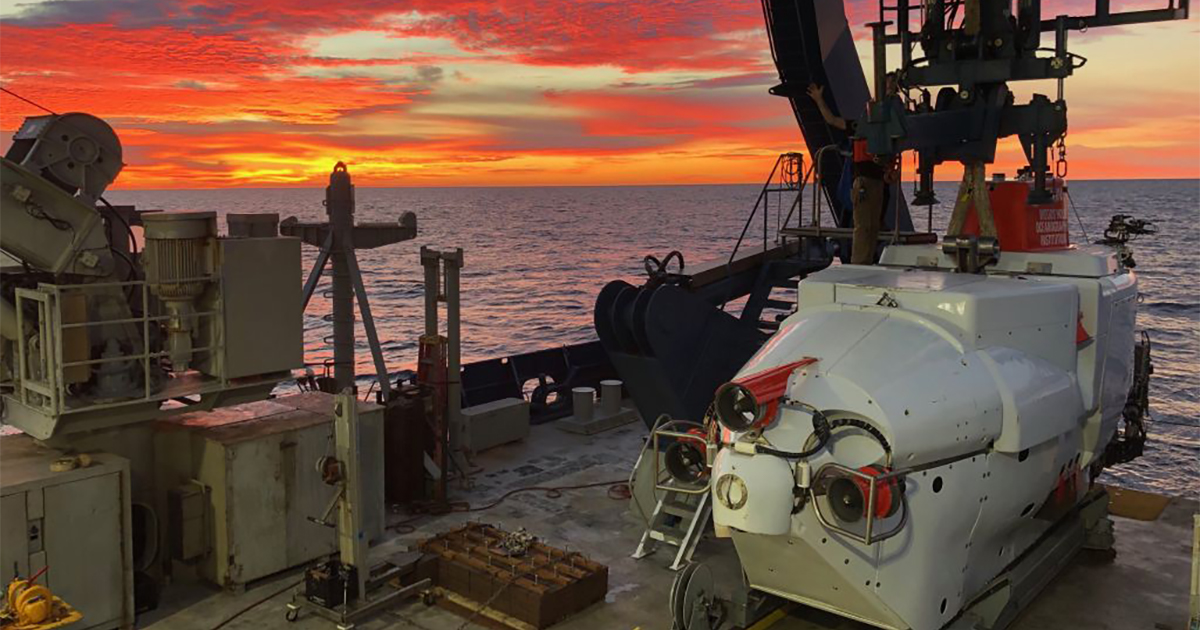 The oceans cover 71% of the Earth's surface, but house 99% of the world's biosphere – the areas where living organisms are found. Therefore, most of the world's biosphere is a deep ocean environment, where it's pitch black, the temperature is just above freezing, and it's subject to crushing pressures. The ocean has an average depth of approximately 3.7 kilometers (2.3 miles). Special equipment is required to visit these extreme depths, which is why less than 5% of this area has been explored and charted.

The National Deep Submergence Facility, or NDSF, which is funded primarily by the U.S. National Science Foundation along with the Office of Naval Research and the National Oceanic and Atmospheric Administration, provides essential equipment for reaching the deep ocean, enabling important science to be conducted, and making discoveries – both good and bad. 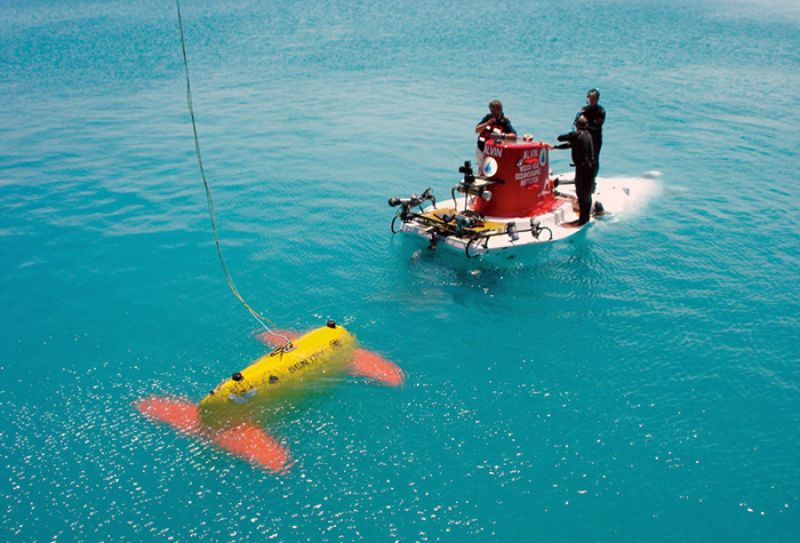 Probably the most famous part of NDSF is the submersible Alvin – a human occupied vehicle (HOV) capable of diving to depths of 4.5 kilometers (2.8 miles), or 68% of the biosphere. Alvin is crewed by three people and allows scientists to gain unique, firsthand knowledge of the deep-sea environment. Alvin is undergoing an NSF-funded upgrade that will enable dives down to 6.5 kilometers (4 miles) - 98% of the biosphere! "Humans can physically travel to the seafloor using HOV Alvin, observe the ocean in real time using the remotely operated vehicle Jason, and conduct mapping, sensing and imaging missions using the autonomous underwater vehicle Sentry," said Anna Michel, the new chief scientist of NDSF.

Although its primary mission is scientific research, Alvin and its support ship, the research vessel Atlantis, were involved in the exploration of the wreckage of RMS Titanic in 1986. They also used this mission to test a remotely operated vehicle prototype: Jason Jnr. The ROV could access parts of the shipwreck and collect images and video that would be too small, or risky, for Alvin to attempt.

The ROV investigation of the Titanic eventually led to a new NDSF underwater vehicle being developed: Jason II is an ROV that allows scientists to take video and collect sonar data to depths of 6.5 kilometers (4 miles). From the comfort of Jason’s control room on board the "mother ship," scientists can observe the deep ocean environment in real time. In addition, manipulator arms on Jason can collect geological and/or biological samples and bring them to the surface. 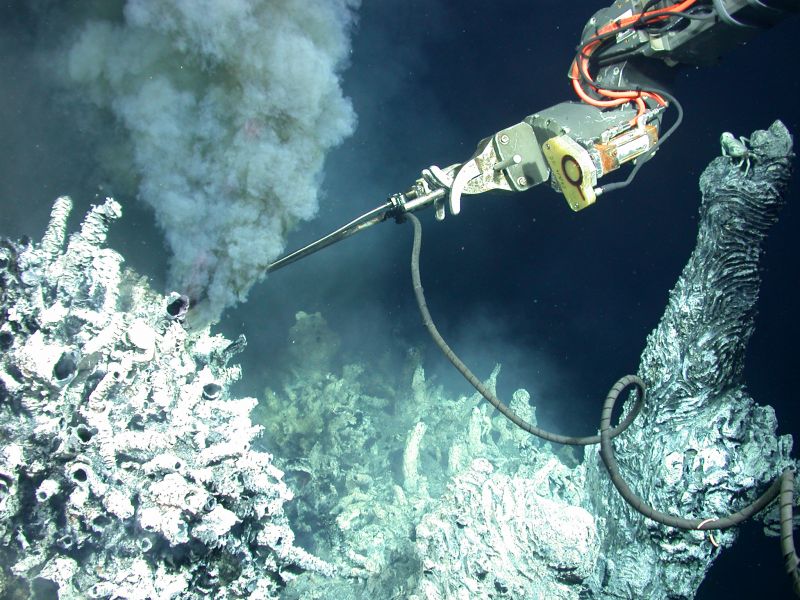 Finally, there is the autonomous underwater vehicle (AUV) Sentry, a deep-sea robot capable of collecting oceanographic data 6 kilometers (3.7 miles) below the surface. Unlike Jason, it is not limited by a cable connected to a ship. Sentry’s scientific sensors not only collect digital images from the ocean depths, but also map the seafloor in 3D with multiple sonar systems and magnetic sensors.

Unveiling the human impact on the ocean environment

The important work of the NDSF was recently highlighted when Sentry discovered evidence of drums of the toxic pesticide DDT on the seafloor off the coast of California. The drums were then inspected by Jason, which verified what Sentry had discovered and collected images of the barrels, many of which had broken open or showed signs of leaks.

The domestic use of DDT was banned in the United States in 1972 because of concerns about toxic impacts on humans and wildlife. Prior to this ban, one of the largest producers of DDT was located in Los Angeles County, California. It was estimated that, between 1947 and 1961, the company dumped 2,000 to 3,000 barrels of DDT-related waste materials every month at sea, totaling approximately 1 million gallons of contaminated waste each year.

The NSF-funded discovery found that there was widescale DDT contamination of the deep seabed over a 3,000 square kilometer (1,158 square mile) area, with levels of DDT and associated chemicals up to 160 times greater than threshold levels at which toxic effects may occur. The researchers described the way the toxic materials were discarded as "inherently sloppy."

Sen. Dianne Feinstein of California, who organized a congressional briefing on this discovery, called the discarded barrels “one of the biggest environmental threats on the West Coast.”

The vessels of the NDSF were also used to inspect the site of the Deepwater Horizon oil spill. Funded by NSF's Rapid Response Research program, Sentry and Alvin investigated the impacts of the oil spill on deep-sea ecosystems.

The videos recorded by Jason and the crew of Alvin of deep-sea ecosystems – like the hydrothermal vents discovered by the crew of Alvin off the coast of the Galápagos – are also inspirational, showing how much more there is to discover beneath the surface of the ocean.

"When we observe and explore using these vehicles, we discover more about the deep ocean. Images taken by these vehicles help us to answer science questions and lead us to ask new questions. We hope by sharing images and videos of deep ocean environments that we will inspire a diverse next generation of ocean scientists," said Michel.

Hopefully, the sights and sounds of undersea exploration produced by the NDSF will encourage young viewers to pursue deep ocean adventures one day, below the thunders of the upper deep, far, far beneath in the abyssal sea.

Chris Parsons has been a marine mammal and marine conservation researcher for nearly three decades, and he’s been involved in projects on every continent, including Antarctica. He’s currently a 2020-2021 AAAS Science & Technology Policy Fellow hosted in the Office of the Director of the Division of Ocean Sciences and works on ocean science communication and policy. Prior to this Fellowship, he was the Creative & Scientific Content Director for Speak Up For Blue productions – one of the biggest independent nature podcasting companies globally, for whom he hosted and produced several marine science and environmental podcasts. Before that, he was an Associate Professor in the Dept. of Environmental Science & Policy at George Mason University as well as the Director of their undergraduate program in environmental science. In addition to writing a textbook on marine mammal biology & conservation, Chris has published over 180 scientific articles and book chapters on whales and dolphins and conservation. However, the podcast (Dugongs & Seadragons) and four books he has worked on that combine marine science and the roleplaying game Dungeons and Dragons are probably his favorite projects. His claim to fame is that science fiction writer Douglas Adams gave him his old typewriter on which he wrote The Hitchhikers Guide to the Galaxy.