Evaluating the Safety and Efficacy of Ocean Alkalinity Enhancement 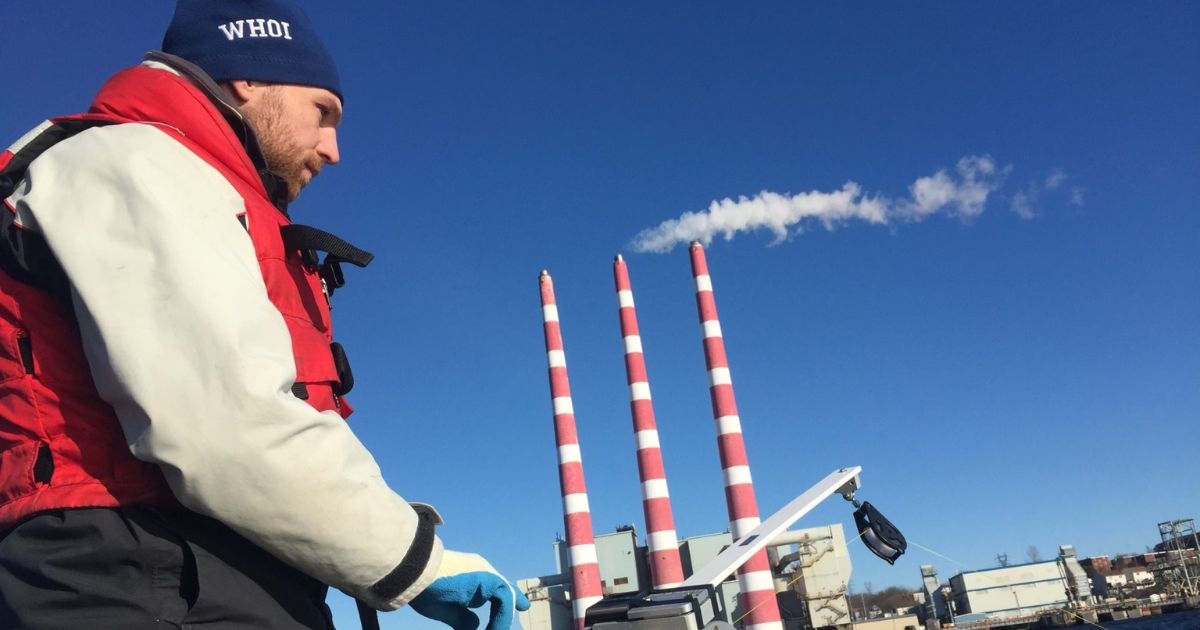 Ocean Alkalinity Enhancement (OAE) may be a relatively safe way of storing CO2 in the ocean, potentially for thousands of years.

This technique mimics natural weathering processes but accelerates them by adding low doses of alkalinity to the ocean’s surface, slightly increasing its pH and enhancing its ability to absorb CO2 from the atmosphere. Despite the enormous potential for OAE to help tackle the climate crisis, there are still many questions and challenges associated with it.

In 2021, scientists from Dalhousie University and Planetary Technologies, working in Halifax, Canada, started a joint industry-academic project to investigate the efficacy and safety of OAE. Funded by the ClimateWorks Foundation, the Thistledown Foundation, and a Natural Sciences and Engineering Research Council of Canada (NSERC) Alliance Grant, this multifaceted project applies expertise from many talented researchers in academia, industry, and government. At the core of the project are Drs. Douglas Wallace, Hugh MacIntyre, and Ruth Musgrave from Dalhousie University, and Drs. Will Burt and Greg Rau from Planetary Technologies.

The team chose Bedford Basin, located in Halifax Harbour, as a site for future experimental alkalinity additions. This basin is small and relatively enclosed, making it easy to characterize in both time and space, and it has been monitored weekly for almost 30 years by researchers at the Bedford Institute of Oceanography and, more recently, Dalhousie. This makes it the perfect location for a controlled experiment. Before they can add alkalinity to the basin, however, the team needs to complete considerable foundational work, including measuring baseline characteristics of the basin.

Musgrave focuses on the physical processes within the basin and aims to predict where alkalinity additions could end up, and over what timescales. Anything added to the ocean’s surface will both move horizontally and diffuse (mix) downward. This rate of mixing downwards is particularly important for determining OAE feasibility.

Increasing alkalinity at the ocean surface creates a region of relatively low CO2 concentration, commonly characterized as pCO2 (partial pressure of CO2). For OAE to be effective, this region of low-pCO2 water needs to maintain contact with the atmosphere to facilitate further exchange and take up CO2 from the atmosphere. This exchange is relatively slow (on the order of months). However, vertical mixing could occur much faster. Fast rates of vertical mixing would move this high-alkalinity, low-pCO2 water downwards too soon, essentially making the alkalinity addition ineffective at drawing down atmospheric CO2 on the short timescales (weeks to months) necessary for this process to be commercially viable. 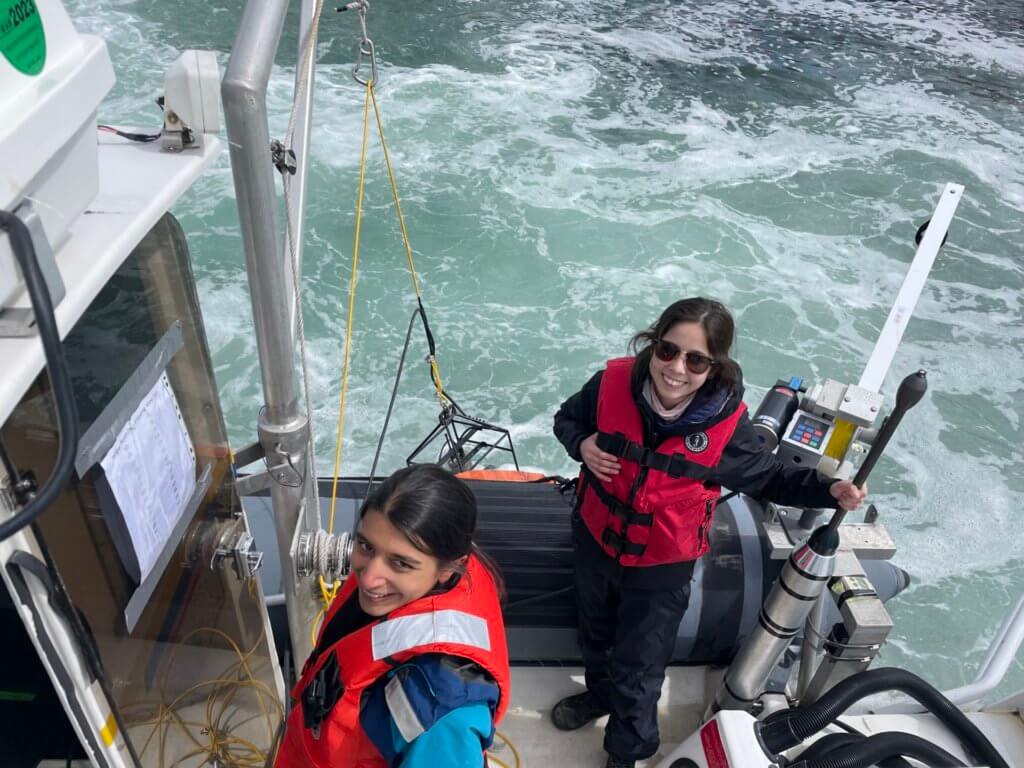 Dr. Ruth Musgrave and Ruby Yee aboard the research vessel in the Bedford Basin.

To characterize these processes in the Bedford Basin, Musgrave and PhD candidate Ruby Yee are developing a high-resolution, 3D numerical model of the basin. In their model, they release both a passive dye tracer and alkalinity, which will help characterize the spatial variability and residence time of any future alkalinity additions. However, Musgrave notes that “a model really is just a work of fiction until you can validate it.” Together with Dr. Mathieu Dever, Musgrave and Yee have been sampling the 3D variability of the basin since December 2021 to both establish a baseline and to provide data to evaluate the model’s performance. Dever, a research scientist at RBR and an adjunct researcher at the Woods Hole Oceanographic Institution, developed a fast underway profiler called the EcoCTD that allows the team to capture extremely high-resolution temperature and salinity observations of the entire basin over short timescales.

At the heart of the EcoCTD is an RBRconcerto3 CTD, equipped with a fast-response thermistor and augmented with additional bio-optical sensors such as a fluorometer. While the ship is underway and moving at speeds of three to six knots, the EcoCTD, which is attached to a lightweight winch, cycles between free falling to the desired depth and subsequently being reeled up to the surface, taking measurements the entire time. With this setup, the team can cover roughly 15 km in about two hours with a resolution of 100-200 m between each CTD profile. The team samples the oval-shaped Bedford Basin every few months, completing one transect along the length of the basin and a couple across. They hope to increase sampling frequency soon.

For Musgrave, a great observational dataset of more than 600 CTD profiles has already been collected, which will soon be combined with her numerical model. This is of course only one aspect of a larger project. Once the physical model is validated, the researchers will add in a biogeochemical modeling component and further comparison with observations. Wallace, the team’s chemical oceanographer, is determining what concentrations of alkalinity to add and at what rate. Researchers at Planetary

Technologies are investigating how to create alkalinity additions without being carbon intensive, potentially by repurposing mine tailings. MacIntyre focuses on the impact of OAE, performing lab and field experiments to determine how alkalinity added in a concentrated region affects phytoplankton growth rates and community structure. More biologists will likely be brought into the project to explore other aspects of the ecosystem.

As a reflection of this ever-evolving project, the monitoring plan has grown, demonstrating its importance and interest to the scientific community. What was originally just three scientists (Musgrave, Dever, and Yee) in a zodiac, the team now includes members of Wallace’s lab group taking pCO2 measurements and using two autonomous underwater vehicles to measure temperature and conductivity. It will soon include biologists taking water samples to characterize the 3D structure of phytoplankton and zooplankton. The result is an invaluable 3D grid of observations, helping the team learn more and more about the basin and the potential of OAE. The team is also developing strategies to monitor future alkalinity additions. This is perhaps one of the biggest hurdles of the project, as they need to observe in real time that the alkalinity addition does trap CO2. The EcoCTD with the RBRconcerto3 CTD should be a particularly well-suited instrument for the task.