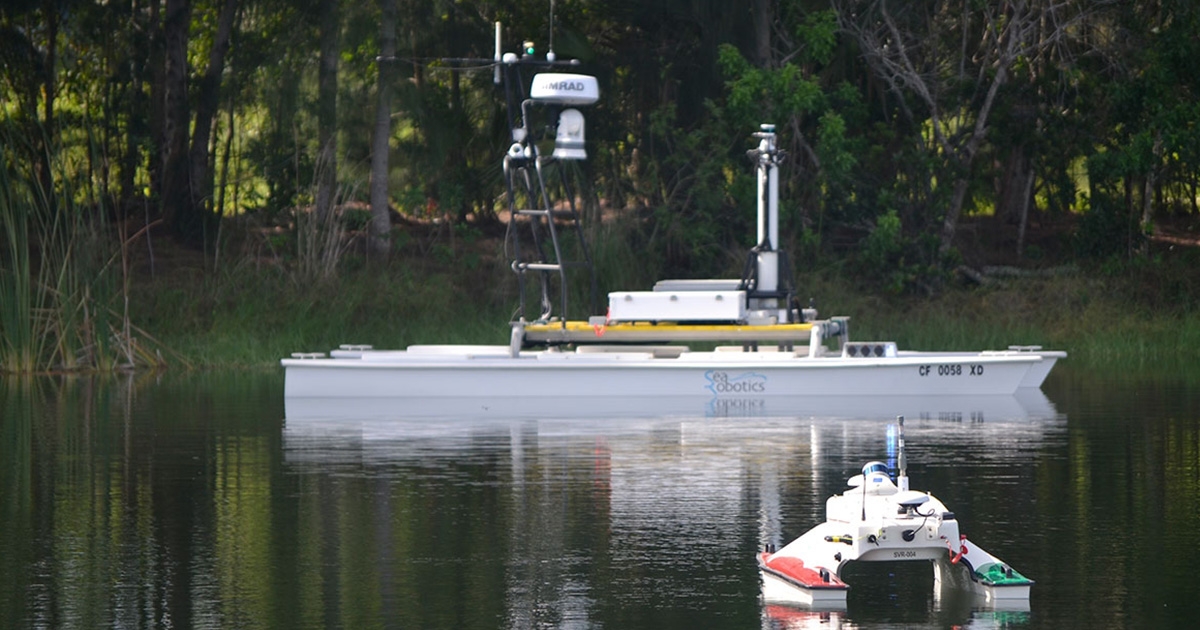 Autonomous Surface Vehicles (ASVs) represent one of the fastest growing markets in the ocean tech space. Applications vary, but the deployment for multidisciplinary marine survey, offshore surveillance missions, and search and recovery operations are among the most notable of late.

While ASVs come in a range of vehicle classes—which broadly determine their size, weight, and payload capacity—the underlying premise that unites this expanding ecosystem of smart vehicles is sustainable operational efficiency: less resources in the field yield more cost-effective and safe exploration of often hazardous or hard-to-access waters.

As compelling as the age of Artificial Intelligence (AI) and at-sea autonomy might seem, ASVs as an agent in this “sea change” are—for now at least—only as adroit as their masters. When we talk about autonomous operations, we are in essence talking about supervised autonomy, whereby skilled technicians effectively train and condition a machine to carry out routine tasks—in other words, Machine Learning (ML) is a process fully reliant on experienced instructors.

Process is the operative word here. The use of an ASV—and conditioning it to run more and more automated functions—requires a fresh approach to professional development, one that priorities the training and retraining of field teams to leverage the capabilities of uncrewed surface vehicles.

For the team at SeaRobotics, developing and delivering easy-to-follow hands-on ASV training courses is just as important as the complex engineering that goes into manufacturing these uncrewed assets. By working with a broad range of ocean professionals—from commercial hydrographers to US Navy tactical teams—they not only help prepare operators for the ongoing integration and evolution of rapidly-advancing marine robotics, but also learn from their customers first-hand about their specific emerging needs.

This two-way feedback loop was central to discussions at SeaRobotics HQ in Stuart, FL in early September 2022, when their in-house ASV specialists hosted a series of two-day, hands-on ASV operator training workshops. These interactive sessions married both theory and practice by including a day of technical instruction followed by a full water day with an opportunity to plan and execute shallow water surveys in SeaRobotics’ 26-acre (1,132,560 sq-ft) test lake.

As well as participate in the quick setup and deployment of several models from their current ASV fleet, including the company’s flagship SR-Surveyor M1.8, attendees were able to familiarize themselves with our proprietary autonomy software and OIS user interface, test run and collect data set from onboard Sonar and LiDAR systems, and understand how the SeaRobotics family of ASV systems work with HYPACK and QPS software packages.

Greater access to fully integrated and highly mobile ASVs like the SR-Surveyor M1.8 has also made the option of multi-boat deployment far more manageable and intuitive to orchestrate. The afternoon demonstration gave SeaRobotics technicians a chance to show the value of ASV force multiplication, whether controlled from shore or a support vessel.

“When it comes to smart marine survey and surveillance in this newfound era of field-proven uncrewed vehicles, the formula for exponential efficiencies is no longer a matter for debate,” said Lou Dennis, SeaRobotics’ VP of Operations.

“The present-day utility of ASVs and the capacity for multiple units—and models—to operate in unison and follow one mission plan unlocks end-user benefits that only a few years ago would have sounded conceptual at best. Today, we—advocates of intelligent marine robotics and the growing numbers of trained operators—have the tech-inspired recipe for genuinely “doing more with less”—less fuel, less personnel, less carbon footprint—which ultimately drives down the cost of data acquisition and processing.”