Welcome to the Newest Member of the Nation’s Research Vessel Fleet, the R/V Neil Armstrong! 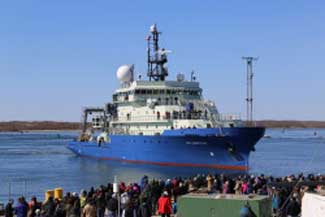 Christened after the legendary explorer Neil Armstrong, the new ship will seek to follow his legacy of exploration and scientific discovery. Capable of ranging up to 11,500 nautical miles, the Neil Armstrong is 238 feet long, is equipped with two full-sized labs, and can support up to 44 scientists and crew.

The Ocean Observatories Initiative (OOI) is excited to be amongst the first to use this vessel as the R/V Armstrong recovered two OOI Moorings during its “Science Verification III (SVC III)” Cruise from Virginia to Woods Hole, MA. These moorings were the Coastal Pioneer Array Central Surface Mooring and Upstream Inshore Profiler Mooring located on the continental shelf south of Martha’s Vineyard.

Home-ported at the Woods Hole Oceanographic Institution, the Armstrong will be enlisted for future Pioneer Array maintenance cruises, as well as cruises to the Global Irminger Sea Array southeast of Greenland.

The Coastal Pioneer and Global Irminger Sea Arrays are the OOI’s two arrays in the North Atlantic. The Coastal Pioneer Array is one of two coastal arrays and is located along the continental shelf-break front off the coast of New England. The Pioneer Array’s oceanographic and meteorological observations from the highly productive region along the continental shelf-break off the coast of New England. This array allows scientists and educators to examine several important coastal processes, including shelf break fronts, frontal upwelling, and the role of filaments and eddies in cross-shelf exchange of parameters such as nutrients, heat, and biomass.

The Global Irminger Sea Array is one of four global sites in the OOI focusing on the critical, yet under-sampled, high-latitude regions of the Pacific and Atlantic. It includes a network of moorings that will support sensors for measurement of air-sea fluxes of heat, moisture and momentum; physical, biological and chemical properties throughout the water column.

The OOI, a project funded by the National Science Foundation, is an integrated infrastructure of science-driven platforms and sensor systems that measure physical, chemical, geological, and biological properties and processes from the seafloor to the sea surface. It was designed to provide data to address scientific challenges such as climate and ecosystem health.