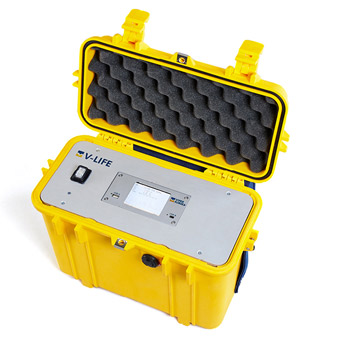 Viper Subsea, the Portishead and Aberdeen based subsea engineering company that provides consultancy and develops products for the oil and gas sector worldwide, is celebrating winning a Queen’s Award for Enterprise in Innovation for its ground-breaking V-LIFE Electrical Insulation Resistance Improvement System.

V-LIFE has enjoyed spectacular global success since it was launched in 2013 and has become established as a key component in helping operators extending the life of their offshore fields. The system has been deployed as far afield as Indonesia and Australia.

The V-LIFE acts as both a preventative measure and an active 'healer' to low insulation resistance. By deploying an electro-kinetic and electrochemical process developed by Viper Subsea, the V-LIFE can minimize and mitigate the effect of water ingress into the insulation. It is a standalone device that can be readily retrofitted into topside equipment or provided as a function of the V-LIM. The V-LIFE also monitors the insulation resistance, voltage and current of the subsea umbilical with high accuracy and can display the IR graphically in real time giving a visual indication of the effectiveness of the system. Online data recovery allows Viper to optimize the configuration data and provide regular integrity reports.

The Queen’s Award in Innovation is awarded following recommendation from the Prime Minister and was conferred on 21 April 2016, Her Majesty's birthday. Neil Douglas, Managing Director, and Max Nodder, Business Development Director, at Viper Subsea will celebrate the award at HM The Queen's Reception at Buckingham Palace on Thursday 14 July 2016.

“We are honored to receive this award,” explained Mr Douglas. “V-LIFE represents British innovation at its finest. It has been developed to specifically address a problem that affects many offshore oil and gas fields and its success is testament to its effectiveness. It is the right technology at the right time, but key to its success has been the efforts of the team here at Viper Subsea in developing a high quality product based on innovative technology that is being well managed into the marketplace, and supported with superior levels of customer service. The Queen’s Award is one which all staff here at Viper Subsea share. I couldn’t be more proud of our collective effort.”

The Queen’s Award for Enterprise in Innovation is a pinnacle in achievement for the V-LIFE system which, less than three years old, has already secured the Innovation of the Year award at the Business Leader Awards 2015; the prestigious Innovation & Technology Award at the Subsea UK Business Awards 2014; and the Technology Innovation of the Year award at the Private Business Awards 2014. The Queen’s Award confirms the system’s place as one of the most important innovations of recent years within the subsea oil and gas industry, and one which reaffirms British design and manufacturing expertise.