U.S. and Cuba to Cooperate on Conservation and Management of Marine Protected Areas 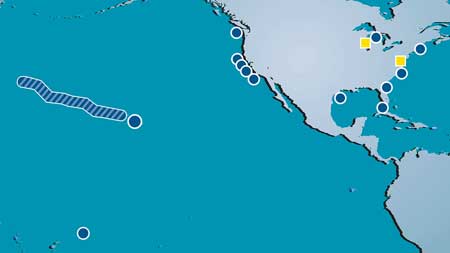 The National Oceanic and Atmospheric Administration (NOAA) and the National Park Service (NPS) have signed a Memorandum of Understanding (MOU) with Cuba’s Ministry of Science, Technology, and Environment (CITMA). The MOU aims to facilitate joint efforts concerning science, stewardship, and management related to Marine Protected Areas (MPAs). The MOU also includes a sister MPA program to foster conservation and understanding of natural marine resources in both countries, sharing technical and scientific data, and promoting education and outreach initiatives.

The Office of National Marine Sanctuaries serves as the trustee for a network of underwater parks encompassing more than 170,000 square miles of marine and Great Lakes waters from Washington state to the Florida Keys, and from Lake Huron to American Samoa. The network includes a system of 13 national marine sanctuaries and Papahānaumokuākea and Rose Atoll marine national monuments.

“We recognize we all share the same ocean and face the same challenges of understanding, managing, and conserving critical marine resources for future generations,” said Dr. Kathryn Sullivan, NOAA administrator, who was in Cuba for the signing of the agreement. “The opportunity for international cooperation in marine conservation is invaluable and this moves us closer to ensuring a healthy and productive ocean for everyone.”

National Park Service Director Jonathan B. Jarvis said, “Cooperation among protected area managers of Cuba and U.S. national park and marine sanctuaries is a great way to preserve our shared natural heritage of the wider Caribbean and Gulf of Mexico regions. After all, fish, marine mammals, sea turtles, birds and other marine life exist in ecosystems that rarely fall within maps drawn by man.”

Florida Keys National Marine Sanctuary protects the world’s third largest barrier reef and is home to one of North America’s most diverse communities of underwater plants and animals. Nearly 6,000 marine species inhabit the coral reefs, mangrove forests, seagrass meadows and other habitats of the Florida Keys.

Guanahacabibes National Park, one of Cuba’s largest protected areas, was declared a Biosphere Reserve by UNESCO in 1987. With diverse marine and coastal habitats the park is one of the most important places in Cuba where sea turtles come ashore to lay eggs and protects one of Cuba’s healthiest coral reef ecosystems. The offshore Banco de San Antonio supports a lush coral reef ecosystem located at the confluence of the currents that flow from the Caribbean into the Gulf of Mexico. As a result, the bank’s coral reefs are importantly placed to have significant influences on the condition of coral reefs in the Gulf of Mexico and South Florida.