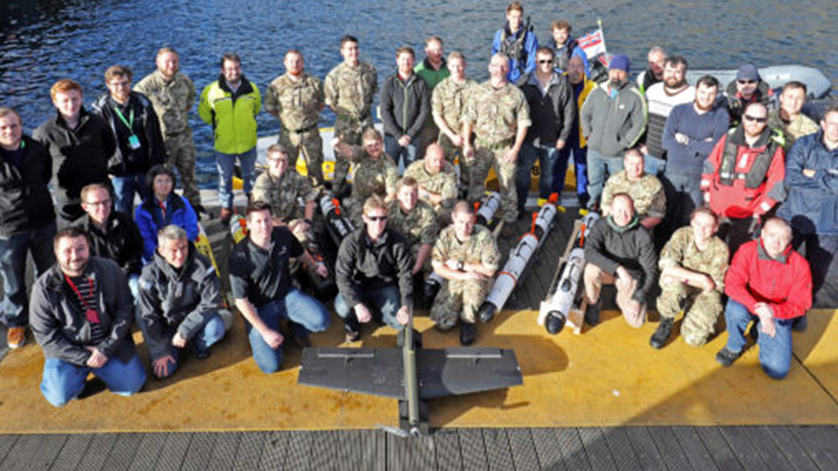 As part of this exercise, SeeByte supported the US Navy Lab of Naval Surface Warfare Center Panama City Division (NSWC-PCD), Defence Research and Development Canada, an agency of the Canadian Department of National Defence, and the UK’s Defence Science and Technology Lab (Dstl).

Together with ASV Global, Bluebear, and QinetiQ the team were successful in facilitating the collaboration of unmanned vehicles including air, surface, and subsea, on common missions running through Dstl’s Maritime Autonomy Framework (MAF) realised through SeeByte’s Neptune software. Using vehicles from Hydroid, OceanServer Technology, SeaRobotics, Bluebear and ASV Global, the team networked 10 unmanned systems, from three different countries through a single command and control station. By running communications through Bluebear’s aerial drone Blackstart, this relay link meant that the surface and subsea vehicles were able to operate at a far greater distance from the shore.

Another vital component of this success was the Autonomy Control Exploitation and Realisation (ACER) command and control system. SeeByte partnered with primes including QinetiQ and Thales to demonstrate the ACER project which has integrated and exploited MAF, providing a single command station to manage Unmanned Maritime System (UMS) fleets. Operators were able to define available assets, mission goals and objectives and no-go areas. Fleet operators were also able to monitor the vehicles in the fleet as they autonomously adapted their paths and behaviours in response to feedback from the environment.

The technologies developed provide the first major steps towards a paradigm shift: a move away from men on the front-line operations towards unmanned over-the-horizon multi-squad operations supported by a shore-side team.

Lt Cdr Jacqueline McWilliams, officer in charge of the Royal Navy’s Maritime Autonomous Systems Trials Team (MASTT), reflected on the Unmanned Warrior trials “Demonstrating the capabilities of MAF and MAPLE at Unmanned Warrior was a great success. An exercise of this scale was an unprecedented opportunity to not only show the world the scope of autonomous technology but really push the boundaries of what is possible. Records were being broken, celebrated, then less than 24 hours later we were breaking the same records again! Teamwork was a crucial element of the successes, the knowledge and expertise of all involved really produced some ground-breaking advancements in maritime autonomy”.

Unmanned Below the Sea: Webinar to Prese

Successful Trials for Inland Waterways U