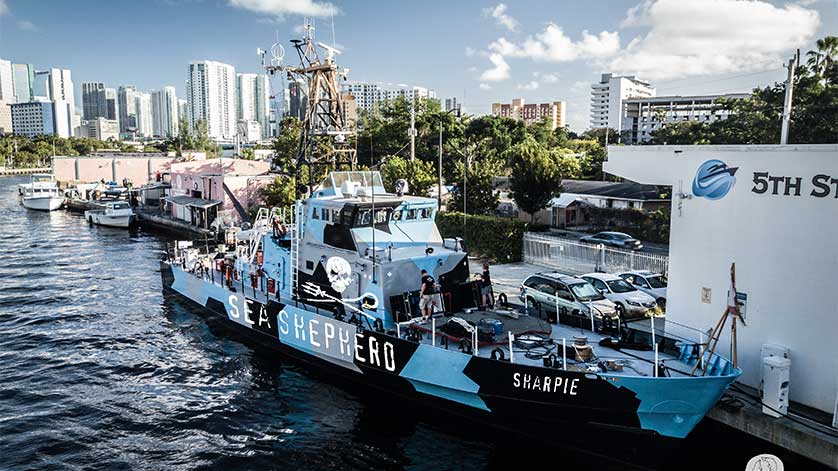 Sea Shepherd Conservation Society, the direct-action marine organization, will unveil its newest vessel, the M/V Sharpie, at a press conference on Monday, December 11th at 11:00 am at the 5th Street Marina in Miami, Fla., it was announced by the group’s founder, president and CEO, Captain Paul Watson.

Additionally, Captain Sandy Yawn, star of the Bravo series Below Deck Mediterranean, has been brought on to help captain the new ship. Captain Yawn will guide the Sharpie on its inaugural mission to the Gulf of California where it will join sister ships the M/V Farley Mowat and the M/V John Paul DeJoria, currently there for Operation Milagro IV, a campaign to save the critically endangered vaquita porpoise. All three ships are 110 ft. Island-class patrol boats.

“I grew up on the ocean and have always respected the power it holds,” said Captain Yawn. “Now that I’m joining the Sea Shepherd fleet as Captain, I realize the tremendous responsibility I have in doing my part to save it, along with all the life it contains.”

Both Watson and Yawn will be participating in the December 11th press conference in Miami, along with the vessel’s namesake, Chris Sharp. Los Angeles-based Sharp is the founder of several all-natural biomedical companies including Skye Biologics Inc., Human Regenerative Technologies and Osprey Biomedical Corp. All are designed to augment and support degenerated or damaged tissues in surgical repairs and non-operative therapy as a potential alternative to surgery.

A longtime lover of the sea, Sharp has been donating to Sea Shepherd for numerous years. When Sea Shepherd was looking to add a new vessel to its fleet, he generously stepped in to sponsor the purchase.

“I’m very passionate in our need and our quest to protect and restore our oceans and waters,” said Sharp. “We owe it to our children to protect the generator and support system of life; the world has so much to lose beyond the beautiful mammals and vast creatures of the sea if we fail to act. My family is honored to contribute to such a noble cause and humbled by all Captain Watson and Sea Shepherd does as an organization.”

“We are excited to have the Sharpie join our three-vessel squadron in the Sea of Cortez,” said Captain Watson. “Thanks to Chris Sharp for making this possible and to Captain Sandy for delivering the vessel Mexico, where it will play an integral part in preventing the extinction of the endangered vaquita.”