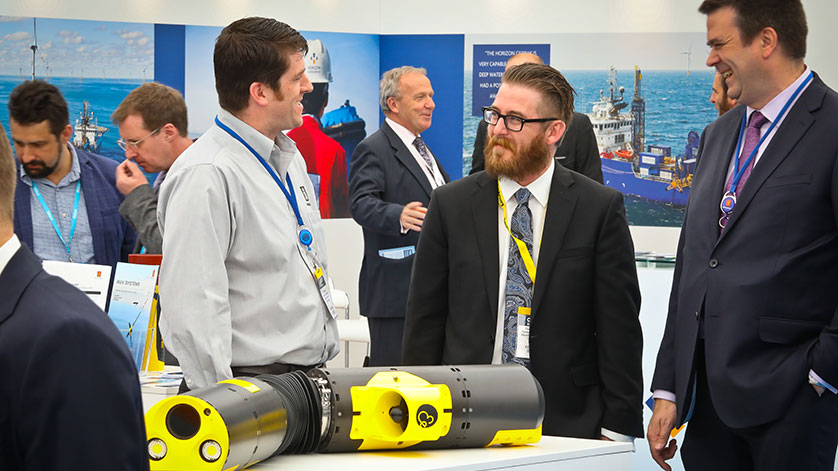 With the Ocean Business team now back from organizing another international event held just six weeks after the largest Ocean Business event to date – they have now had time to review and analyze the figures. The 10th anniversary Ocean Business, held in April at the National Oceanography Centre in Southampton UK, has once again exceeded all expectations with 4350 attendees through the door from an incredible 61 countries.

Versha Carter, Group Director of Diversified Communications confirmed that “Visitor numbers were up by 3% with an amazing 38% coming from outside of the UK. Not only did we have more actual bodies through the door but they stayed for longer which added to the show being the busiest ever. We have had many exhibitors saying that Ocean Business has now become the best ocean technology show in the industry and most certainly the one that offers the best return on investment. We went onsite for this event very much aware that the industry is still in the midst of challenging times and it was wonderful to see how Ocean Business provided that vote of confidence and delivered a much needed boost back in to the industry.”

The team were inundated with emails and telephone calls from exhibitors about the outstanding quality of this year’s show. They included Terry Sloane, MD of Planet Ocean, who said “It has been the busiest trade show we have ever attended, not just Ocean Business, but any trade show in the industry!”

Del Norte’s Laurie Smith felt the same, saying, “The best show. I get more leads at this show than any other major show that I exhibit at in the UK.”

Debbie Durgen from Klein commented, “This show has been phenomenal - it wasn’t just the quantity, it was also the quality!”

With over 360 international exhibitors from 26 different countries, this was the biggest exhibition at Ocean Business yet. Cheri Arvonio, Event Manager, confirmed that “Despite always having a waiting list for this event at least six months out of the show – this year we were able to accommodate even more companies than ever before. Judging by the feedback we are expecting that between 80-90% of the space will be rebooked within weeks. For a show that doesn’t take place again for another 2 years’, that is outstanding.”

The training and demonstration sessions are a prominent part of Ocean Business and are what makes the event so unique. There were back-to-back workshops hosted over the course of the show with many of the sessions bursting with visitors – particularly those that were located in the dockside area. Visitors also enjoyed trying out products in test tanks and onboard vessels, as well as learning about technologies in training workshops and seminars. 1640 places were booked on 168 workshops with many sessions standing room only.

With the show being a priority in the industry diary, Ocean Business played host to some key associated industry events. For the first time the European Commission supported two events organized by Marine Southeast and the European Enterprise Network that both focused on the convergence of defense and commercial applications in the marine environment. In addition, there were a number of high profile meetings such as; a series of presentations designed to develop business opportunities coordinated by The Maritime Alliance; the Hydrographic Society’s AGM and ten workshops showcasing the world class technologies and facilities of the NOC.

Showing commitment to the future of the industry, Ocean Business once again hosted the Ocean Careers event which aims to highlight the range of opportunities within the ocean technology sector. Always a popular element, 2017 was no exception, Paige Harrison a student from the University of Liverpool commented; “Ocean Careers is really, really good. I came here because I was unsure about what I'm going to do in the future, whether I'm going to continue with my masters or not and this has helped me clarify what’s actually happening and what I can do in the future”

Running alongside the exhibition, demonstrations, conference, associated meetings at Ocean Careers, was a schedule of ever popular social events, always a favorite at Ocean Business, providing the perfect platform for colleagues to catch up and do business. Vlad Lazar, Survey Engineer, Marine Research SRL, Romania commented, “A very good industry event where you can meet all the important players in the world of ocean and underwater exploration.” and Mike Hole, Commercial Director, Keller, UK summarized the show as “Ocean Business is the best attended and most friendly event in our calendar. High level industry contacts from all over the world. Not to be missed”

Ocean Business will be returning to the National Oceanography Centre in Southampton, UK from 9th – 11th April 2019 and exhibit sales will be on sale this week.