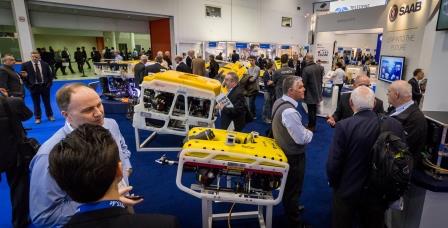 Oceanology International 2016 (OI2016) held 15-17 March at London’s ExCeL attracted 7,836 unique attendees from 79 countries, with many revisiting on consecutive days to provide an overall show attendance of 14,161.

“We are absolutely thrilled with how OI2016 has gone,” says Event Director Jonathan Heastie of Reed Exhibitions. “With many of our participants active in the oil and gas industry, it’s fair to say that their expectations were lowered pre-show in light of the market challenges faced… but the feedback we received from our exhibitors all week was tremendous. They told us consistently that the quality of the visitors they met has risen sharply, with key decision-makers and senior technologists on-site from a multitude of industries, not just oil and gas and, most importantly, that these important attendees are looking to buy both now and into the future with numerous orders taken during the show.

“Typical of the feedback we have received is this comment from John Pepper of OceanWise: ‘As first time exhibitors at OI, we had a good show, with interest shown in our products and services from organizations in the UK and overseas seeking to gain efficiency savings in the way they monitor and manage data and operational workflows. We look forward to signing up at least three overseas distributors as a result of being at the show.’

“We are thrilled for our customers and delighted that the active core of the ocean technology community has continued to support and attend OI, keeping it as the focal point of the industry’s calendar globally. We now turn our focus towards replicating its success in both China in November (9-11 November, Shanghai) and at our new North American event in San Diego in February (14-16 February), before returning to ExCeL in March 2018 (13-15 March), when Interspill 2018 will be co-located alongside OI2018.”

Once again the vessels moored immediately outside the OI2016 exhibition halls in the Royal Victoria dock, proved a draw with visitors. The 11 vessels, varying in length from 12.5m to 53m, that came to OI2016 had a busy time with 1,107 people going aboard for one of the 93 trips in the five giving demonstrations; and 847 visiting the vessels moored alongside as reception and exhibition bases. 142 people attended the dock side demos in the specially sited portacabin from which the demonstrations and all underwater activity could be viewed.

Announcements from exhibitors
Exhibitors used OI2016 to make a series of announcements:
• “We ended the week on a nice note securing a new contract from Saab Seaeye for a Leopard buoyancy ROV pack 3000m-rated which will be manufactured at the Rochdale fa
cility using high performance low density TG26/3000 syntactic foam” David Clayton, Sales Director, Trelleborg Applied Technologies
• Ashtead Technology has become the first subsea services company to be accredited by the United Kingdom Accreditation Services (UKAS) for its calibration laboratory
• Subsea 7 and 3D at Depth announced the completion of several metrology projects using subsea LiDAR technology in new configurations to help increase overall efficiencies in offshore oil and gas applications
• Nanhal Rescue from China ordered two Teledyne Benthos deep-tow systems with QINSy software from QPS through reseller Geo-Marine Technology. The deep-tow systems will be used in the search for MH370
• Fugro announced a hat-trick of offshore wind contracts - two in UK waters (Walney Extension; and Aberdeen’s European Offshore Wind Deployment Centre) and one in the Dutch sector of the North Sea (Hollandse Kust (zuid) wind farm zone)
• Next Geosolutions has been awarded a geophysical, UXO & geotechnical contract from Prysmian SLR for the MONITA project in the Adriatic Sea
• Kongsberg Maritime Ltd, the UK division of Kongsberg Maritime, announced the expansion of its extensive subsea Aberdeen-based rental pool, with the addition of its sophisticated new MUNIN AUV
• The National Oceanography Centre (NOC) is to form part of the new Centres of Excellence in Satellite Applications which is expected to aid economic growth in the Solent region
• Van Oord Dredging and Marine Contractors BV has purchased a suite of Gemini 720is multibeam imaging sonar
• Ocean Scientific International Ltd (OSIL) has recently shipped a network of eight MetOcean buoys to the Middle East for use in environmental monitoring
• The UK Marine Industries Alliance (MIA) has launched an industry Code of Conduct in respect of surface maritime autonomous systems (MASs)
• The Society of Maritime Industries (SMI) has formed a seventh focus group for its maritime engineering membership which will be led by the maritime autonomous systems (MAS) Council
• BMT ARGOSS has been appointed by Sakhalin Energy Investment Company Ltd to deliver weather forecasting services to support its onshore and offshore operations in the Sakhalin region, off the east coast of Russia
• ASV has completed the construction of four C-Worker 5 vehicles
Highly successful ‘Catch the Next Wave’
The ‘Catch the Next Wave’ held at the prestigious Royal Institution the day before OI2016 opened attracted an invited audience of over 250 industry professionals and researchers from more than 30 countries, united by their shared interest in key disruptive technologies. Focussing on next-generation robotics and automation, the conference brought together leading global experts from the aerospace, medical, academic and marine industries to explore the latest technological advances from their fields, and their visions from 2020.
Four significant presentations took place at the conference.
• Gwyn Griffiths, Founder of Autonomous Analytics, was presented with the OI Lifetime Achievement Award
• Paul Ridout, Executive Chairman of Ocean Scientific International Limited was named the AMSI Council Business Person of the Year
• The Alan Greig Memorial Prize for outstanding contribution to operational oceanography was awarded to Richard Burt of Chelsea Technologies Group
• And, the SUT Oceanography Award for 2015 was presented to Professor Karen Heywood of the University of East Anglia
Further information
Further information on OI2016, including the conference presentations from all ten conference streams and Catch the Next Wave; the show dailies produced by Geomares Publishings’ ‘Hydro International’; as well as links to the OI China and OI North America websites; and early information on OI2018 and Interspill 2018 is here.
back to top