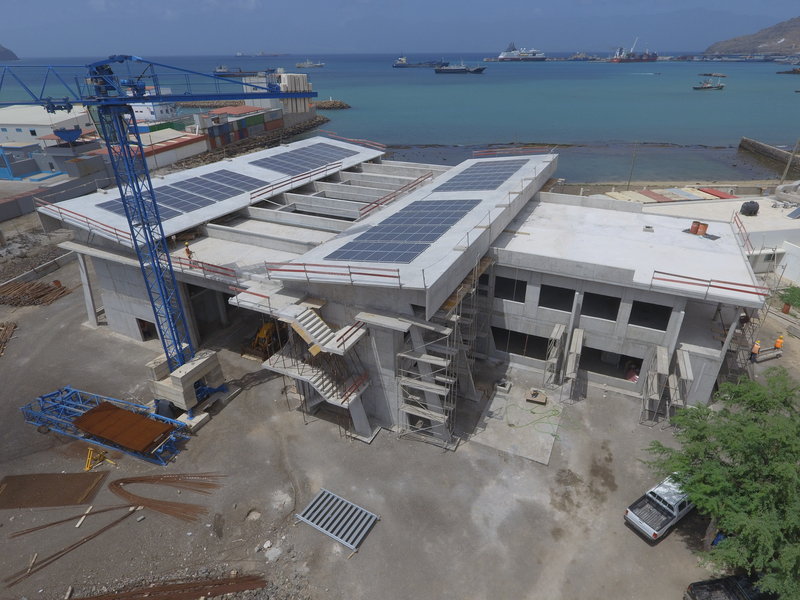 After 20 months of construction, the cooperation partners GEOMAR Helmholtz Centre for Ocean Research Kiel and the Instituto Nacional de Desenvolvimento das Pescas in Mindelo (INDP), together with the Cabo Verdean planning office SPL/DARQ and the construction company SGL have reason for a moment of pride. The shell of the “Ocean Science Centre Mindelo" has been successfully completed and the project is now entering the second phase, the technical equipping of the Centre. The completion of building activities is expected for the first quarter of 2017.

The tropical and subtropical Northeast Atlantic is a very exciting region for climate research, marine biology, oceanography and many other disciplines. For many years, scientists of the GEOMAR Helmholtz Centre for Ocean Research Kiel have been conducting campaigns in the area. A few years ago, these numerous long-term activities resulted in the planning of a laboratory and workshop building in Mindelo on the Islands of Cabo Verde. The longstanding and spirited cooperation with the Cape Verdean Institute for Fisheries Development, the Instituto Nacional de Desenvolvimento das Pescas (INDP), was an additional driver for this enterprise. About two and a half years ago, the partners were able to start the implementation of the project idea. GEOMAR is contributing a total of 2.5 million euros. The construction comprises a building, equipped with two universal labs, a wet lab, workshops for maintenance and repair of scientific equipment, storage rooms and offices as well as seminar rooms. The shell has now been completed successfully, to be followed by the technical fitting and detailed preparations for the use of the facility.

The coordination of the building activities lies with the construction department of GEOMAR in Kiel together with the SPL/DARQ Planning Office in Cabo Verde and the Ministry of Infrastructure, Spatial Planning and Housing of the Republic of Cabo Verde. “The successful realization of such an endeavour with a high quality standard at such a distance is not at all a given”, Silke Simon, head of the technical services at GEOMAR emphasizes. In addition to the technical fitting, the planning of the furnishing has started as well. “Due to the limited budget we have been including second-hand furniture as well as scientific equipment still in good condition”, reports Cordula Zenk, coordinator of the German-Cabo Verdean cooperation, adding further: “We have been receiving extraordinary support, two full containers have just arrived in Mindelo.” The completion of the building is currently expected for the first quarter of 2017.

“This construction will create an attractive environment to promote and foster marine science in the tropical and subtropical Atlantic”, Prof. Dr. Arne Körtzinger, scientific head of the German-Cabo Verdean cooperation at GEOMAR, points out.

Together with the Cluster of Excellence “The Future Ocean” and partners from the business sector, a trip to Cape Verde is being planned for November in order to discuss further details of the OSCM with the Cabo Verdeans and possibly kick off new joint scientific projects. "Our aim is to include the national as well as regional interests in the future use of the OSCM. Furthermore, we would like to take full advantage of the new opportunities offered by the OSCM right from the beginning”, Prof. Dr. Arne Körtzinger explains. The delegation will visit different islands of the archipelago to collect ideas and proposals.

"Eventually, the OSCM will thrive on a range of different scientific hot topic questions in the region and scientists and technicians from Kiel, Cabo Verde and overseas who will investigate these and who have for years shown great interest in the region”, Prof. Körtzinger concludes.

The Underwater Centre Awarded for Increa