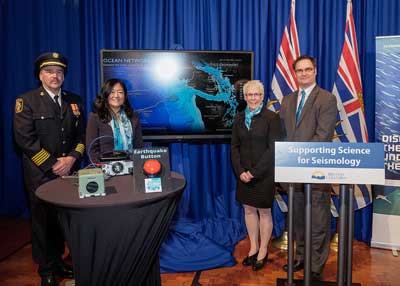 The Honorable Naomi Yamamoto, Minister of State for Emergency Preparedness, announced that $5 million will go to Ocean Networks Canada (ONC) and their partners to ensure that communities have the best chance to protect themselves and find safety when a major earthquake occurs.

This funding enables ONC to expand its seismic sensor network on land, and importantly, on the seafloor off the coast, where large earthquakes occur. ONC will also coordinate a variety of regional data to be hosted on Oceans 2.0, its world-leading data management system that collects and archives vast amounts of diverse data, in real-time, from ONC instruments and infrastructure.

Collaborating with other agencies, including the British Columbia Ministry of Transportation and Infrastructure, Natural Resources Canada and the University of British Columbia, ONC will be able to monitor earthquakes from other risk areas as well.

Leveraging the capabilities of Oceans 2.0, ONC is currently developing a software platform that will deliver an alert to decision-makers within seconds of a major rupture. These vital seconds of warning will allow time to take protective actions, for example: shutting down gas lines, stopping trains and surgeries, and taking cover.