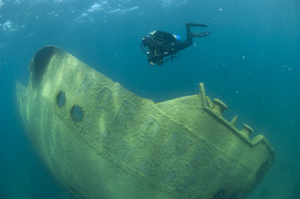 NOAA has released for public comment a draft environmental impact statement (DEIS) and proposed rule for expanding the boundaries of Thunder Bay National Marine Sanctuary in Lake Huron from its current 448 square miles to 4,300 square miles.

The proposed expansion is based on several years of research by NOAA and its scientific partners as well as public input, and would include protection of an additional 47 known historic shipwrecks.

During the process to review the sanctuary’s management plan in 2006, NOAA received comments expressing interest in expanding the sanctuary’s boundary to include the waters adjacent to Alcona and Presque Isle counties in Michigan. Specifically, several local government and non-governmental organizations passed resolutions or submitted written letters of support for boundary expansion.

Just below the surface of Lake Huron, a diver photographs the German freighter Nordmeer, which ran aground in 1966 and eventually sank in 40 feet of water. The relatively shallow depth of the wreck site provides divers more time to explore the twisted steel hull.(Credit: NOAA, Thunder Bay NMS.)

Additionally, in 2007, the Thunder Bay Sanctuary Advisory Council adopted a resolution supporting expanded boundaries. NOAA held three public scoping meetings on this topic in April 2012.   “The proposal to expand the sanctuary is the result of a collaborative effort that involved considerable input from all sectors of the local community,” said Jeff Gray, sanctuary superintendent. “We welcome further public review and comment as we go forward with the important job of managing this special place which is important to the regional economy and protects world-class historical and recreational shipwreck sites.”

The sanctuary’s Great Lakes Visitor Center has become a major tourist destination and economic stimulant in the region. According to a 2005 study on total visitor spending in the region, the sanctuary impacts $92 million in sales, $35.8 million in personal income to residents, and 1,704 jobs.

One of 14 sites managed by NOAA’s Office of National Marine Sanctuaries, Thunder Bay sanctuary currently protects 45 nationally significant shipwrecks. Research indicates that as many 100 shipwreck sites are yet to be discovered in northern Lake Huron. Through increased tourism and related business development, the sanctuary is working with various partners to encourage sustainable tourism in the region, and foster a broader awareness of the Great Lakes and their rich maritime heritage.

The DEIS and proposed rule are available for download at thunderbay.noaa.gov. All comments must be received by August 13. Written comments should be sent by mail to: Jeff Gray, Sanctuary Superintendent, Thunder Bay National Marine Sanctuary, 500 West Fletcher Street, Alpena MI 49707.

Comments may also be submitted electronically via the Federal eRulemaking Portal http://www.regulations.gov. Under document type, select “Proposed Rule,” under Keyword or ID, type in NOAA-NOS-2012-0077. The documents are also available for review at the Thunder Bay National Marine Sanctuary’s headquarters office in Alpena.

Public hearings will be held at the following locations: