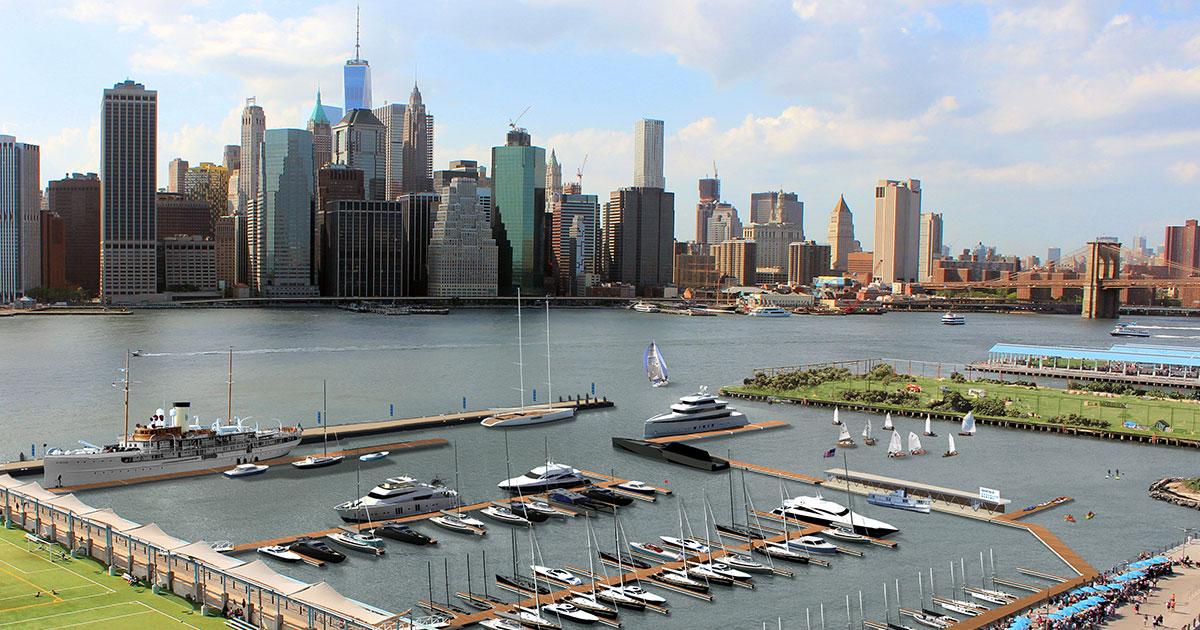 New York City’s first new marina in 50 years is opening at full capacity in Brooklyn Bridge Park. ONE°15 Brooklyn Marina, set on 8 acres between Piers 4 and 5 at the mouth of the East River, came with a price tag of over $28 million and involved massive infrastructure work.

“ONE°15 is proud to bring to fruition the first new marina in New York Harbor in a generation and to welcome boaters to the calmest waters in the New York Harbor,” said Singapore-based Chairman and CEO Arthur Tay, the marina’s developer. “We were pleased to partner with Brooklyn Bridge Park and the City of New York to develop this outstanding marina, which will revitalize recreational boating in the New York City and offer a wealth of community programs.”

Nestled between two major rivers and the Atlantic Ocean, the New York Harbor is susceptible to challenging tides and choppy waters. In response, ONE°15 implemented a robust system of wave attenuators comprised of deep draft steel barges, the first setup of its kind in New York City, to reduce the size and energy of incoming waves.

“Brooklyn’s surroundings and, in particular, the vibrancy of New York Harbor, lend themselves nicely to an accessible, multifaceted marina operation,” said Estelle Lau, the marina's deputy CEO. “ONE°15 Brooklyn Marina will open new doors for the sailing community and the city itself.”

Through a multi-phase design process, ONE°15 Brooklyn – managed by Tay, the Singapore-based Chairman/CEO – worked with city, state and federal agencies and officials, including the DSBS, NYSDEC, USACE and MTA, in navigating complex regulations, moratoriums and subway tunnels. The resulting site, which can host over 100 boats ranging from 30 – 200 feet in length, is a significant feat.

Positioned above the R train and extending outward from a vibrant esplanade, ONE°15 designers and builders integrated the marina into its scenic backdrop. The design minimized piles near subway tunnels and public viewing areas and maintained open-view corridors to south Manhattan. To accommodate larger boats offshore and further its complete transformation, builders added piles with the MTA’s approval.

Altogether, ONE°15, located between former shipping piers, has reminded New Yorkers that its boroughs’ waterfront, traditionally zoned for a clustering of logistics and storage facilities, can be accessed and enjoyed.

“The operational team at ONE°15 Brooklyn Marina worked closely with engineers, architects and its Singapore-based owners to maximize the usage of this iconic location, facing lower Manhattan's Financial District and flanked by Brooklyn Bridge and Governor's Island, to accommodate the widest range of water enthusiasts,” said John Winson, general manager of ONE°15 Brooklyn Marina. "The marina will accommodate everyone – from deep draft ocean-going yachts to single kayakers."

Another noteworthy aspect of the marina is its community-driven mission. In fact, ONE°15 donates 2 percent of its yearly revenue to the nonprofit Community Dock. ONE°15 also offers a first-class Sail Club, a membership-based organization that serves the New York Harbor sailing community with high-performance, professionally maintained racing and cruising boasts. It is an integral part of the ONE°15 Marina, serving as a gateway to New York’s waterfront. With unique sail programming, the goal is to assist in revitalizing recreational sailing in the harbor.

ONE°15 Brooklyn Marina's award-winning sister club, ONE°15 Sentosa Cove, Singapore, has been consistently recognized, including the honor of Best Asian Marina 2019, by Asia Boating Awards, and numerous other accolades. Construction has also begun on ONE°15 Marina Puteri Harbour, Malaysia.

For more information on ONE°15 Brooklyn Marina, click here.

About ONE°15 Brooklyn Marina

ONE°15 Brooklyn Marina, Brooklyn’s gateway to New York Harbor, is a new marina that offers recreational water access to the local Brooklyn community, New Yorkers and boating enthusiasts from around the globe. Located just south of the Brooklyn Bridge between piers 4 and 5 in the Brooklyn Bridge Park, the Marina features a Sailing Club and School, 100-plus berths for vessels up to 200 feet and a “Community Dock” that supports community programs offering free and low-cost waterfront and boating activities. The marina is open from May 1- Oct. 31 of each year, weather permitting. Find ONE°15 Brooklyn Marina on Instagram @one15brooklynmarina or on Twitter@ONE15Brooklyn. Visit their website.