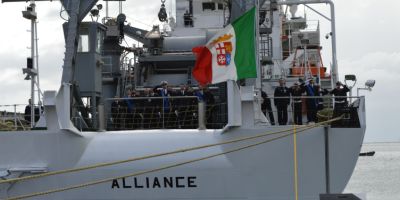 The larger of CMRE’s ships is now operated by an Italian military crew under an Italian Navy Flag.

The NATO Research Vessel Alliance is one of the only two NATO-owned research vessels, supporting the STO (Science and Technology Organization) CMRE (Centre for Maritime Research and Experimentation), based in La Spezia (Italy), to fulfil its mission for the common benefit of all NATO member nations.

On 1 January 2016, the custody of NRV Alliance transitioned from the Supreme Allied Command Transformation (the NATO Command in Norfolk, USA) to CMRE, as part of the STO creation and NATO and CMRE reform process started in 2012. As a consequence of the transition, the previous flagging agreement with Germany ceased on 31 December 2015 and Italy offered to take over the ship.

Both CMRE ships (this includes the Coastal Research Vessel Leonardo, being operated by the Italian Navy since 2010) are now enrolled in the Italian Navy Military Log (Quadro del Naviglio Militare dello Stato), fly the Italian flag and are based in La Spezia (Italy). In December 2015 Vice Admiral Claudio Gaudiosi, Deputy Chief of Staff of the Italian Navy (on behalf of the Italian Ministry of Defence), and Rear Admiral (Rtd) Hank Ort, CMRE Director (on behalf of STO CMRE), signed the memorandum of understanding which provides a new stable and cost effective operating model for both ships. Thus, the two vessels apply the Smart Defence concept to maritime Science and Technology (S&T), by pooling and sharing cost-effective seagoing capabilities in order to deliver validated, reality-proven, risk-reduced and system approach S&T innovation. Moreover, the new close collaboration enhances the longstanding strategic partnership between CMRE and the Italian Navy.

NRV Alliance is a 93-metre, 3,180-ton, open-ocean ice-capable research vessel which offers 400 square meters of laboratory space and extensive and sophisticated navigation, computer, and communication equipment. The NRV Alliance was designed to minimize noise radiating from the ship into the water, making it an excellent platform for sonar testing and other types of research where a quiet undersea environment is essential. For this, NRV Alliance is considered to be one of the quietest ships in the world.

Thanks to NRV Alliance and CRV Leonardo, CMRE is the only NATO entity that can work through the entire maritime technology development process, from concept to prototype testing at sea.