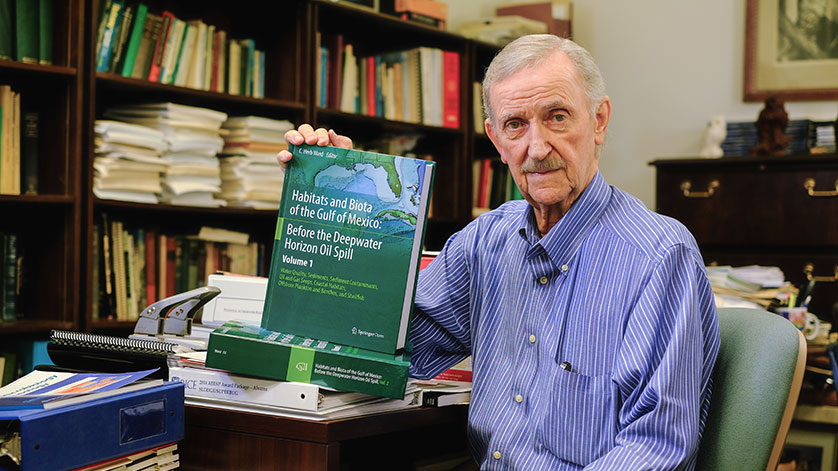 C. Herb Ward, professor emeritus of civil and environmental engineering and ecology and evolutionary biology and presently a scholar at Rice's Baker Institute for Public Policy, edited "Habitats and Biota of the Gulf of Mexico: Before the Deepwater Horizon Oil Spill" at the behest of BP Exploration and Production, which leased the platform. BP paid for production of the books and the open-access fees.

The two-volume set is available as free e-books from publisher Springer, which also sells print versions.

Deepwater Horizon, stationed 250 miles southeast of Houston, was destroyed in April 2010 and the well spilled millions of gallons of oil into the Gulf before it was capped at the seabed 87 days later. Eleven people died in the explosion.

The books were originally intended to set a baseline to help assess post-spill effects on the Gulf, Ward said. He was approached for his expertise during the early days of litigation. "Their technical people were asked for input because in the assessment of damages, you have to have a baseline. So what was it? Does it exist?

"They started asking really well-known people, and the universal answer was that there wasn't one," he said. "There was a study of this and a study of that -- all good published papers -- but they didn't serve as a baseline in any way on which to judge the damages."

Ward, who taught courses at Rice in oil-spill cleanup and is the founding editor-in-chief of the international scientific journal Environmental Toxicology and Chemistry, enlisted authors from academia and from environmental consulting firms to write the collection of white papers. "A job I thought was going to take six months ended up taking six years," he said. "These were supposed to be internal documents for BP to start with, but in the process, they decided it would be a service to publish all this work, and I agreed."

The authors' topics include examinations of water quality, plant and animal life in the Gulf, natural oil seepage, sediments, coastal habitats, and commercial and recreational fisheries. The books include entire chapters on sea turtles, birds and animal disease and mortality in the Gulf. He noted that while the Mississippi River continues to be the dominant influence on Gulf ecosystems, the steady release of oil has also had an impact. "Remember, the books reflect the Gulf before the spill," Ward said. "They have nothing to do with oil spills – except that oil goes into the Gulf 24 hours a day and has been doing so for thousands of years. There is a whole biology down deep that's based on the presence of oil, and it would disappear if the oil release stopped. It's their energy source -- energy from the sun that was captured in plant and animal material and buried eons ago.

"The Gulf is a special body of water," he said. "It always has been and always will be. I don't know of any other major bodies of water that are so heavily impacted by the continuous input of oil. It's an enormous energy input because of the oil vents and the ecology that's developed around them. That might be completely unique."