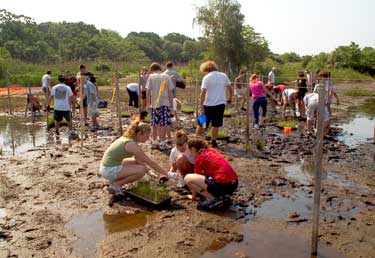 The Award will recognize the actions of individuals and organizations that are making a difference by increasing understanding of climate impacts, adapting to and reducing threats, increasing response capabilities, and providing other innovative approaches to reducing impacts and increasing resilience in a changing climate. It will help spotlight innovative tools and actions that are making a difference now, and serve as a source of inspiration for additional efforts that advance climate smart resource conservation and management.

"Our climate is changing, and these changes are already affecting the nation's valuable wildlife and natural resources," said Michael Bean, Principal Deputy Assistant Secretary of the Interior for Fish and Wildlife and Parks. "This new Award recognizes outstanding leadership by organizations and individuals that is critical to help advance the resilience of our natural resources and the people, communities, and economies that depend on them."

The Award also directly addresses the goals of the National Fish, Wildlife, and Plants Climate Adaptation Strategy, which was developed by a coalition of federal, state, and tribal natural resource agencies. These include:

• Goal 2: Manage species and habitats to protect ecosystem functions and provide sustainable use;

"State fish and wildlife agencies serve as stewards of the nation's fish and wildlife resources," said Dave Chanda, President of the Association of Fish and Wildlife Agencies, which is helping to lead implementation of the National Fish, Wildlife, and Plants Climate Adaptation Strategy. "Today's threats to fish, wildlife, and their habitats are exacerbated by climate change and underscore the need for incorporating climate adaptation in to conservation and science-based management." Nominations will be accepted until January 8, 2016. Individuals, groups, organizations and government agencies are eligible to apply. Three to five Awards are expected to be announced in 2016.

Award sponsors include the U.S. Department of the Interior, U.S. Fish & Wildlife Service, the Commerce Department's National Oceanic and Atmospheric Administration, the Natural Resources Conservation Service and the U.S. Forest Service. They will sponsor the award in collaboration with the National Fish, Wildlife, and Plants Climate Adaptation Strategy's Joint Implementation Working Group, which is composed of representatives from 21 federal, state and tribal natural resource agencies.

For more information about the Award or how to apply, please visit the Climate Adaptation Leadership Award main page.