Millions of Sharks to Surface Among the Nation’s Post Offices 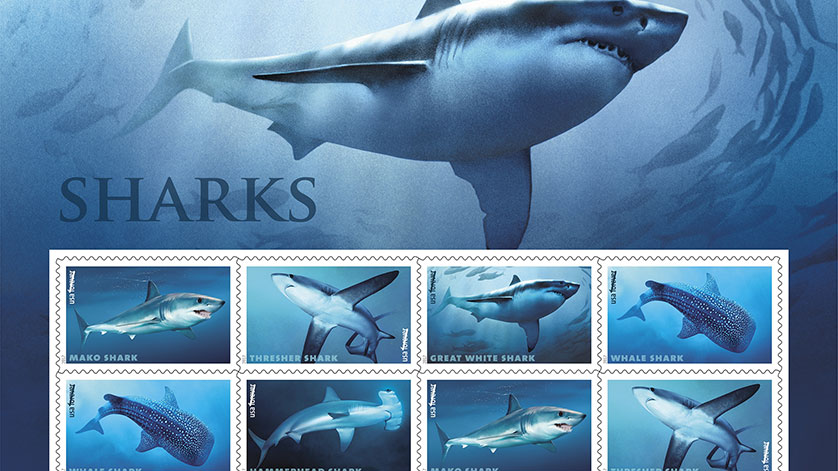 Don’t worry — these sharks won’t bite. They’re smaller than a clam and flatter than a flounder. The U.S. Postal Service will celebrate the wonder of sharks on August 1, by issuing the Sharks Forever stamps featuring five species that inhabit American waters — the mako, thresher, great white, hammerhead and whale shark. Please share the news on social media using the hashtag #SharksStamps.

Available at Post Offices nationwide tomorrow, the First-Day-of-Issue ceremony will place at 8 a.m. ET at the Newport Aquarium in Newport KY. You may purchase the stamps at this link now for delivery shortly after the stamps are issued.

Artist Sam Weber of Brooklyn, NY, based his five illustrations on images captured by undersea photographers. Using those references and the guidance of shark experts, he created clear, realistic depictions of sharks in action. Sketching first with a pencil, Weber then used his computer to add detail, dimension and color. Art director Derry Noyes of Washington, DC, designed the pane.

“While sharks may be scary to some, the prospect of a world without sharks is truly frightening,” said U.S. Postal Service Chief Human Resources Officer and Executive Vice President Jeffrey Williamson. “As apex predators, sharks keep other marine life in balance, and by doing so, they play a critical role in regulating our largest ecosystem — the oceans. As one of the nation’s oldest public service institutions, the Postal Service takes pride in using its stamps to raise awareness of important issues. We hope the stamps unveiled today help highlight the need for shark conservation and a greater respect and admiration for these incredible animals.”

Scheduled to join Williamson are Newport Aquarium Director of Operations Chris Pierson and Newport Aquarium Senior Research Scientist Nicholas Whitney, Ph.D. “This Postal Service initiative is a great thrill for conservation-minded shark lovers everywhere,” said Whitney. “It should inspire everyone to support science-based management of these animals so that we can have sharks forever in our oceans, as well as on our envelopes.”

Possibly no other creatures are as mythologized — and as misunderstood — as sharks. Blockbuster thrillers and sensationalized media have fueled belief that sharks are monsters: unthinking, bloodthirsty, vengeful and primitive. While they are ancient creatures having emerged twice as long ago as the first dinosaurs, after 400 million years of evolutionary refinements, sharks are extraordinarily advanced organisms. The 500 or so known shark species are ideally adapted for their ecological role.

The adaptations of sharks include light, flexible skeletons of cartilage, teeth replaced without limit, and skin covered by a hydrodynamic surface of tiny tooth-like structures. Their enviably keen senses include one that detects electrical signals given off by prey and enables navigation by Earth’s magnetic field. Their nervous systems are adapted to sense miniscule water movements — from a struggling, far-off fish for instance.

Primal fears aside, people threaten sharks more than they do us. Sharks are overfished — often before reaching reproductive maturity. Cutting off fins for a soup delicacy also collapses populations. There is hope. Shark ecotourism allows us to witness their grace. Increased study expands our knowledge of these fantastic creatures.