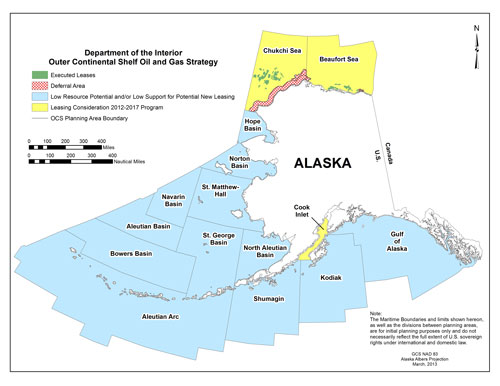 In light of current market conditions and low industry interest, the U.S. Department of the Interior has announced that it will cancel the two potential Arctic offshore lease sales scheduled under the current five-year offshore oil and gas leasing program for 2012-2017. The Bureau of Safety and Environmental Enforcement (BSEE) also denied requests from Shell and Statoil for lease suspensions, which would have extended the expiration date of the leases.

“In light of Shell’s announcement, the amount of acreage already under lease and current market conditions, it does not make sense to prepare for lease sales in the Arctic in the next year and a half,” said Secretary of the Interior Sally Jewell. “I am proud of the performance of Interior’s Bureau of Ocean Energy Management and Bureau of Safety and Environmental Enforcement, the U.S. Coast Guard and others in ensuring that Shell’s program this past season was conducted in accordance with the highest safety and environmental standards.”

Under the current Five-Year Program, Chukchi Sea Lease Sale 237 was scheduled potentially for 2016. The Bureau of Ocean Energy Management (BOEM) issued a Call for Information and Nominations in September 2013, in response to which industry submitted no specific nominations. Shell recently announced that the results of its exploration well at the Burger J site in the Chukchi Sea did not warrant further exploration in the Burger prospect.

Similarly, Beaufort Sea Lease Sale 242 had been scheduled potentially for the first half of 2017. BOEM published a Call for Information and Nominations in July 2014, but only received one nomination, thereby raising concerns about the competitiveness of any such lease sale at this time.

Today, the Bureau of Safety and Environmental Enforcement (BSEE) also denied requests from Shell and Statoil for lease suspensions, which would have allowed the companies to retain the leases beyond their primary terms of ten years. The leases will expire in 2017 (Beaufort) and 2020 (Chukchi). Among other things, the companies did not demonstrate a reasonable schedule of work for exploration and development under the leases, a regulatory requirement necessary for BSEE to grant a suspension. To view the letters regarding the suspension requests, click here for Statoil and click here for Shell.