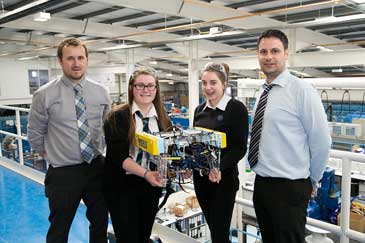 Following the announcement last month that Mintlaw Academy had successfully topped the Scottish leg of the MATE ROV challenge, Hydro Group plc has stepped in to support the final build of the ROV for the competition's international finals, held in June at the NASA Space Centre in Houston, Texas.

Mintlaw Academy came out on top in the annual competition which sees pupils from across Scotland put underwater robots they have designed and built to the test.

Aberdeen-headquartered subsea cable and connector specialist's Hydro Group, which also supplied cable and connectors for the Mintlaw team in 2014, provided the 2016 finalists with a Hydro Bond 57 way dry mate cable mount connector, which interfaces with the ROV to help achieve maximum power.

In addition to supplying the part, and to help further educate and inspire the team, Hydro Group invited a party of S4 to S6 Mintlaw finalists to its facility at the Aberdeen Energy Park, to show them the range of work Hydro Group is involved in.

Craig Reid, Production Manager at Hydro Group, said: "Learning first-hand about Hydro Group's capabilities, and seeing our products and services in action will hopefully have helped enthuse and further inform the pupils on how the technology can be used across a wealth of industries."

Mr. Reid continued: "The student's enthusiasm when we showed them around the workshop was fantastic. As a former pupil of Mintlaw Academy it was great to show the students hands-on what we do, and that there are really exciting and innovative developments happening where they live, with significant opportunities for their future career aspirations."

Ali Hynd, Principal Head of Technology for Mintlaw Academy, said: "We are so proud of the team for reaching this stage of the competition, and everyone is thrilled about going to NASA for the finals.

"Companies like Hydro Group, which has a true commitment and drive to help young people and encourage the workforce of tomorrow, are invaluable for the future of industry. We're incredibly grateful for the support on the project, and look forward to arranging further visits to the workshop so that more students can benefit from seeing first-hand the work it does."

With regular onsite visits, alongside its investment in training and apprenticeship schemes, Hydro Group aims to develop personal knowledge to help benefit the individual and industry as a whole. The company aims to be seen as an active hub for engaging and connecting students and young people with the working world, believing that providing students with crucial opportunities to further their knowledge and experiences in a competitive job market, safeguards the stability and future of the company and subsea sector industries.