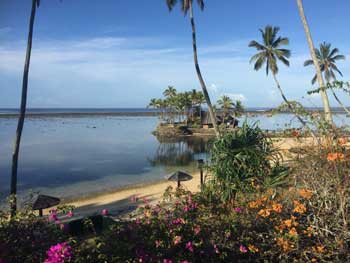 The Global Ocean Commission has welcomed the decision by the UN General Assembly to convene in June 2017 the high-level UN Conference on Oceans and Seas, to support the implementation of Sustainable Development Goal 14: Conserve and Sustainably Use the Oceans, Seas and Marine Resources for Sustainable Development. The conference will be held in Fiji from 5 to 9 June, 2017.

Originally proposed by the governments of Fiji and Sweden, and co-sponsored by 95 countries, the resolution adopted today underlines that the successful implementation of the Sustainable Development Goals will depend upon a revitalized and enhanced global partnership for sustainable development, bringing together Governments, civil society, the private sector, the United Nations system and other actors.

Fiji, venue of the UN Ocean Conference in June 2017

The Sustainable Development Goals (SDGs) were adopted in September 2015 as part of the UN 2030 Agenda. SDG 14, the Ocean Sustainable Development Goal, is made up of seven targets including the creation of marine protected areas, the elimination of harmful fisheries subsidies, the reduction of marine pollution including plastic litter, along with action to increase the resilience of the ocean to acidification caused by CO2 emissions.

In welcoming the resolution’s adoption today, Fiji’s Permanent Representative to the UN, Ambassador Peter Thomson, said the 2014 report of the Global Ocean Commission had clearly demonstrated that Ocean’s health was caught in a cycle of decline and that international ocean governance was fragmented. He said today’s resolution would ensure a coming together of the international community to drive the implementation of SDG14 and reverse the cycle of decline.

The prime movers of the motion, Fiji and Sweden, had originally proposed that the UN Conference be convened every three years between 2017 and 2029. Ambassador Thomson said that depending on the success and outcome of the Fiji summit in 2017, this triennial process would drive SDG’s implementation over the 15 years of the 2030 Agenda.

The Global Ocean Commission in its 2014 report From Decline to Recovery: A Rescue Package for the Global Ocean, proposed a Global Ocean Accountability Board be created in order to measure progress on ocean recovery. The convening of the UN Conference on Oceans and Seas can be a first step in securing everyone is accountable.

José María Figueres, Co-Chair of the Global Ocean Commission, welcomed today’s action by the UNGA, saying: “The high level UN Conference on Oceans and Seas – Fiji 2017 – can provide the first accountability moment all ocean lovers and conservationists have been waiting for; to assess what we are really doing to and for the ocean.”