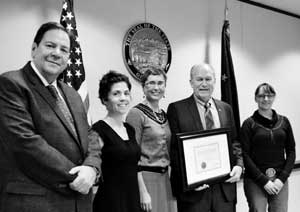 Alaska Governor Bill Walker has announced Fugro as winner of the 2015 Governor’s North Star Award for International Excellence in the category of scientific exchange. This important accolade follows the ‘Spotlight on Arctic Technology’ award announced during the annual Arctic Technology Conference last year.

Fugro’s Alaska Division Manager Rada Khadjinova accepted the award, saying, “It is an honor to be recognized by Governor Walker for this important work. This is truly an Alaska-born discovery, made during our early work on the Alaska Statewide Digital Mapping Initiative (SDMI), and now being utilized in other Arctic regions.”

Originally designed as a regional-scale topographic mapping solution, Fugro deployed the GeoSAR system to Alaska in 2010 to help update the state’s baseline mapping data. It was during this project that Fugro realized the depths to which its GeoSAR system could penetrate snow and ice. Efforts to exploit this capability began in 2012 and have continued every summer since then. In 2016, Fugro anticipates bringing the capability into commercial operations.

In accepting the award, Khadjinova noted the value of partnerships in moving technology forward, both from a state and federal funding perspective with regard to the SDMI, as well as from a research and development perspective, an effort which has included multiple industry, academia, and public-sector partners.