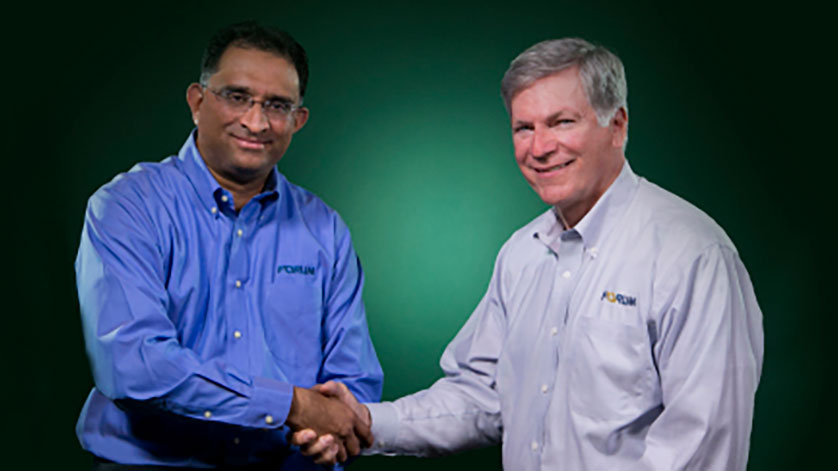 Mr. C. Christopher Gaut, the current Chief Executive Officer, will become Executive Chairman. The Board has also nominated Mr. Iyyanki to stand for election as a director at the 2017 Annual Meeting of Stockholders Meeting in May.

Cris Gaut commented, “It has been a privilege to serve as Chairman and CEO of Forum since its inception six and a half years ago. Three years ago we brought Prady on board to create a more professional, streamlined, and efficient organization that was capable of becoming a force to be reckoned with in the oilfield manufacturing space. Since then he has proven himself at every turn to be an excellent leader with strong business judgement. I was pleased to recommend this move to our Board, and I look forward to the continued growth and prosperity of the company under Prady’s leadership.”

“I am honored to lead Forum into its next chapter,” said Prady Iyyanki. “Cris successfully set the direction for Forum’s business and financial strategy, led the transition to being a public company and built a firm foundation of trust with our investors and customers. He established Forum as a strong competitor within the oilfield equipment manufacturing sector, and has proven to be an excellent mentor for me and many others. In his new position, he will continue to be actively involved with our larger strategic matters, as well as acquisition and capital markets efforts. I look forward to continuing my strong partnership with Cris.”

Prady joined Forum in 2014 after sixteen years of experience with General Electric (GE) in various senior management roles. He served as President and CEO of GE Genbacher/Gas Engines from 2006 – 2011 and President and CEO of Turbomachinery Equipment from 2011 – 2012. He has a Bachelor of Science in Engineering from Jawaharlal Nehru Technology University, India and a Master of Science in Engineering from South Dakota State University.