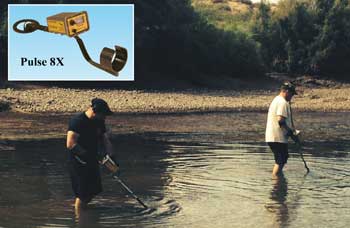 JW Fishers Pulse 8X has been rated the best underwater metal detector by the US Department of Homeland Security’s SAVER program. The System Assessment and Validation for Emergency Responders (SAVER) program was established to assist emergency responders making procurement decisions. Located within the DHS Science and Technology Directorate, the SAVER Program conducts objective assessments and validations on commercial equipment and systems and provides those results along with other relevant equipment information to the emergency responder community. In a comparison of the 8 top underwater detectors on the market, Fishers Pulse 8X was rated number one.

The tools law enforcement agencies use to investigate crimes and ensure public safety are critical to their success. Police departments and sheriff’s offices around the country are adding underwater metal detectors to ensure their dive teams have the right equipment to effectively do their job. An essential tool for locating evidence disposed of in a waterway, metal detectors routinely assist public safety divers in finding weapons, shell casings, stolen objects, and explosive devices.

One agency having great success with the underwater metal detector is the New Mexico State Police. The NMSP Search and Recovery Dive Team was established in 1963 in response to increasing demands for law enforcement divers to respond to drownings and underwater recovery of property and evidence. The team currently consists of nineteen officers stationed throughout the state.

Although most people think of New Mexico as a desert state, within its borders are numerous recreational waterways as well as thousands of miles of irrigation and drainage canals. Recently the team was called out to find a weapon used in homicide and thrown into the Rio Grande River. Dive team member Sgt. Ryan Carr reported, “We used three of our Pulse 8X detectors in the search that day, and located the gun in less than an hour.” NMSP retired captain and former dive team commander Mike Waring said, “If we’re looking for a weapon, we know the Pulse 8X will find it.”

Underwater metal detectors are so effective, and their use has become so widespread, that agencies training public safety divers are developing courses on how to best utilize these devices. One is the Underwater Crime Scene Investigation team at Florida State University. They developed a program that provides advanced training in crime scene investigation for aquatic environments. The focus is on operational techniques and protocols available to the underwater investigator. Students learn how to use a variety of the high tech tools including Fishers Diver Mag magnetometer and Pulse 8X detector to locate weapons and explosive devices.

For more information go to www.jwfishers.com.