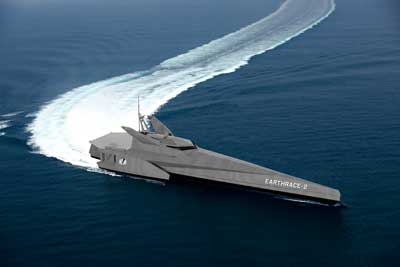 Earthrace Conservation has unveiled concept designs of their new 60m Trimaran to be used for Conservation missions around the World. The radical looking vessel, designed by Auckland Naval Architects LOMOcean Design, is based on the original Earthrace that still holds the world speed record for circling the globe.

Earthrace CEO Captain Pete Bethune says the new vessel is pivotal for the team to increase its work in addressing illegal fishing. "We've worked in a number of countries targeting illegal fishing by foreign vessels, but the real work in open waters has been limited because we lacked our own long-range vessel. So this new vessel will be used in blue-water patrols, mostly assisting local units to catch poachers."

Since 2011 Earthrace has been assisting countries with conservation missions, many of which were covered in the succesfull TV Series "The Operatives". In this, Bethune and a team of former military personnel assist countries with pressing conservation issues. The team supplies tactical assets such as Zodiacs, drones and a Sealegs Amphibious Vessel. They train up local Units in such things as hostile vessel boarding and search and secure methods. More importantly, they work with local units in catching criminals involved in environmental crime.
The team has successfully caught a number of vessels fishing illegally in many areas, including Central America, Asia and Africa. They helped close down two gangs involved in Wildlife smuggling in Asia, and exposed several illegal logging operations in Indonesia. They were also successful in catching illegal gold miners in Costa Rica.

The new vessel will serve as a Base of Operations for the team, and will allow them to run missions almost anywhere on earth. It will hold most of the existing assets, including the Sealegs, which gives the team a high-speed pursuit option. Bethune claims the vessel will have a range of about 10,000 nautical miles, and a top speed somewhere between 20 and 25 knots. It will accommodate a crew of 26 and can run continuously for up 28 days. There are also plans to film a new spinoff TV Show from "The Operatives" on the new vessel.

Earthrace will be launching a Kickstarter campaign in a couple of weeks to raise $50,000 to assist the team in completing the designs. Build location has yet to be determined, but Bethune says they are currently looking at options, which include a yard in Indonesia that builds composite military vessels. He says they expect construction to start later this year.

The original Earthrace was launched in 2006 and was fueled on biodiesel made from waste cooking oils. In 2008 she set a new world speed record for circling the globe of 60 days, 23 hours and 9 minutes. In 2010 she was involved in collision with the Japanese Whaling Security Vessel the Shonan Maru 2. A month later Bethune successfully boarded this vessel off a jetski in the middle of the night and presented the captain with a $3m bill to replace Earthrace. Bethune was taken back to Japan where he was convicted on five charges, including disrupting the whaling program. He was incarcerated for five months before being released.

LOMOcean Design have continued to develop the Trimaran wave piercer concept since the original Earthrace. Design Director Craig Loomes says the hull form has several key advantages over convential monohulls. Firstly the vessels are extremely efficient, allowing for greater range from a given amount of fuel. Secondly, they offer outstanding seakeeping in rough seas, especially when at speed. This makes them especially suited to military and fisheries enforcement activities.

Sonar Demonstrations Show the Way Ahead