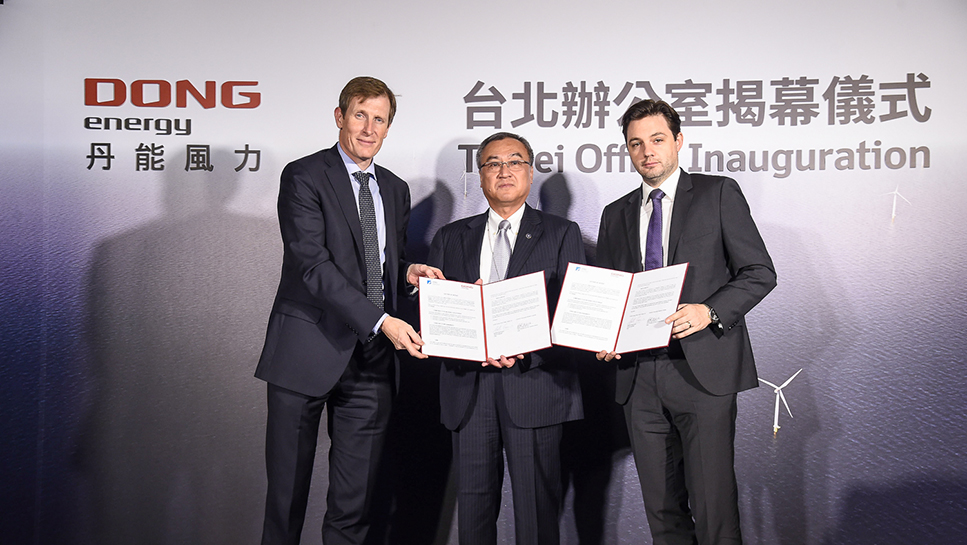 DONG Energy inaugurated its office in Taipei and shared its ambition to develop four offshore wind farms in the Changhua area.

Taiwan’s Deputy Minister of Economic Affairs, Shen Jong-Chin, and Chief Secretary of Bureau of Energy, Lee Chun-Li, were among the many distinguished guests at the inauguration. The event was hosted by DONG Energy’s General Manager for Asia Pacific, Matthias Bausenwein, and CEO of DONG Energy Wind Power, Samuel Leupold. They both expressed their commitment to work with the government, the academic community and industry players to support Taiwan’s green transition of its energy sector.

“Building on our 25 years of experience with offshore wind, I believe we can help Taiwan make the most of its tremendous offshore wind resources. Offshore wind can become a key component in Taiwan’s future energy mix and provide a stable, utility-scale and green source of power from the strong winds in the Taiwan Strait,” Matthias Bausenwein said.

Among the 36 offshore wind farm sites planned by Taiwan’s Ministry of Economic Affairs (MOEA), 21 sites are located in the Changhua County. DONG Energy is currently carrying out a comprehensive environmental impact assessment (EIA) on four of these sites.

Provided that the EIAs are approved by the Taiwanese government and subject to investment approvals by the company's Board of Directors, DONG Energy intends to develop the sites into a total offshore wind capacity of at least 2GW and make a significant investment into Taiwan's energy infrastructure.

This would not only support the green transition of Taiwan’s energy sector, but also help create a Taiwanese supply chain and local jobs. The potential construction of offshore wind farms could expectedly start in 2021-2024.