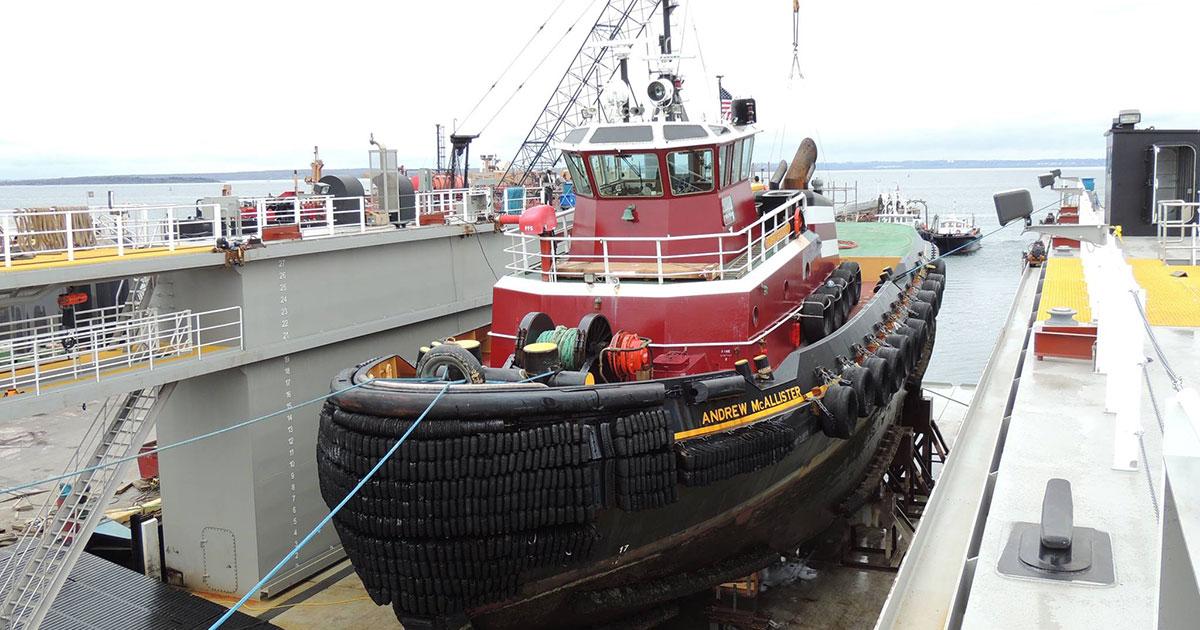 JonRie InterTech is a leader in the design, manufacture and start-up of marine winch systems, based in New Jersey, USA. For many years, the company has provided tugboats, dredgers and other types of vessels with exceptional winch solutions – all built with Hägglunds hydraulic motors from Bosch Rexroth. 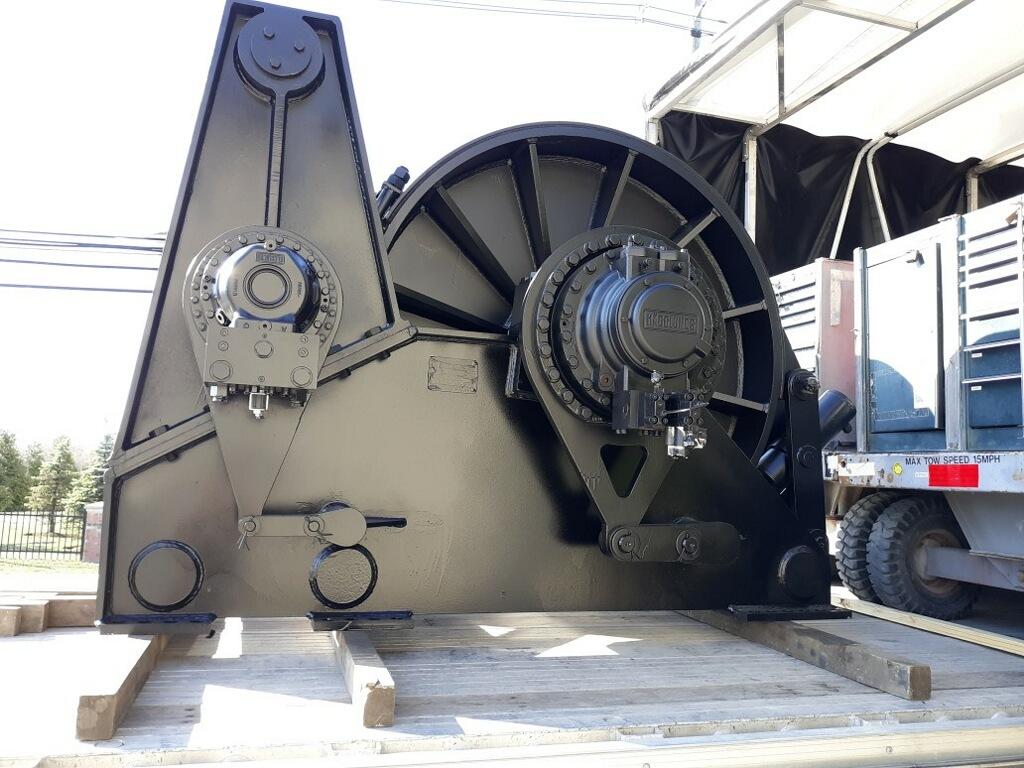 Brandon Durar is the founder and president of JonRie InterTech, which he named after his son John and daughter Marie. In a career of almost four decades, he’s seen trends come and go. But his passion for direct drive systems with Hägglunds hydraulic motors has been constant.

“JonRie has been in business for 20 years,” says Durar, “but I came into contact with Hägglunds motors through my previous company, in the very early 80s. I’ve been using them for pretty close to 40 years now, so I’ve had a lot of experience with them – and a lot of success.”

At JonRie, Hägglunds motors serve every type of winch for the company’s tugboat and dredger and customers, including capstans and windlasses. Moreover, Durar is clear that his choice of Hägglunds is non-negotiable.

“If I sell customers a winch, the main drive motor is always a Hägglunds,” Durar emphasizes. “Because it has to go out there and work 24 hours a day, seven days a week. In the marine business there is no downtime. It’s around the clock.” 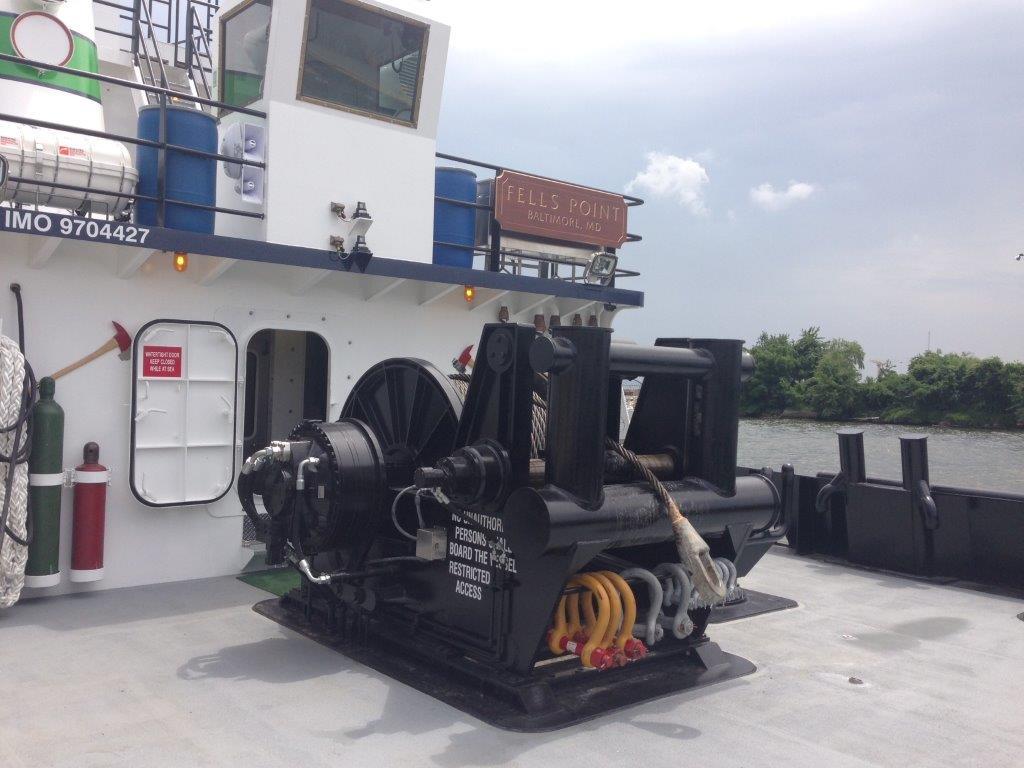 Durar uses one word to explain why he sticks with Hägglunds motors: reliability. In the face of extreme forces, he’s simply found nothing else to match them.

“When you have a marine winch, whether it’s a towing winch on the stern of a vessel or a hawser winch on the bow, sooner or later it’s going to be overhauled,” Durar explains. “With the high horsepower of the tugs nowadays, that backwards pull dumps a lot of energy back into the winch, which is dumped back into the motor. And if the motor can’t take that extreme load, it’s going to blow the drive apart.”

“I’ve got to put something out there that can customers can beat the hell out of,” says Durar. “At the end of the day, Hägglunds motors can take a beating.” 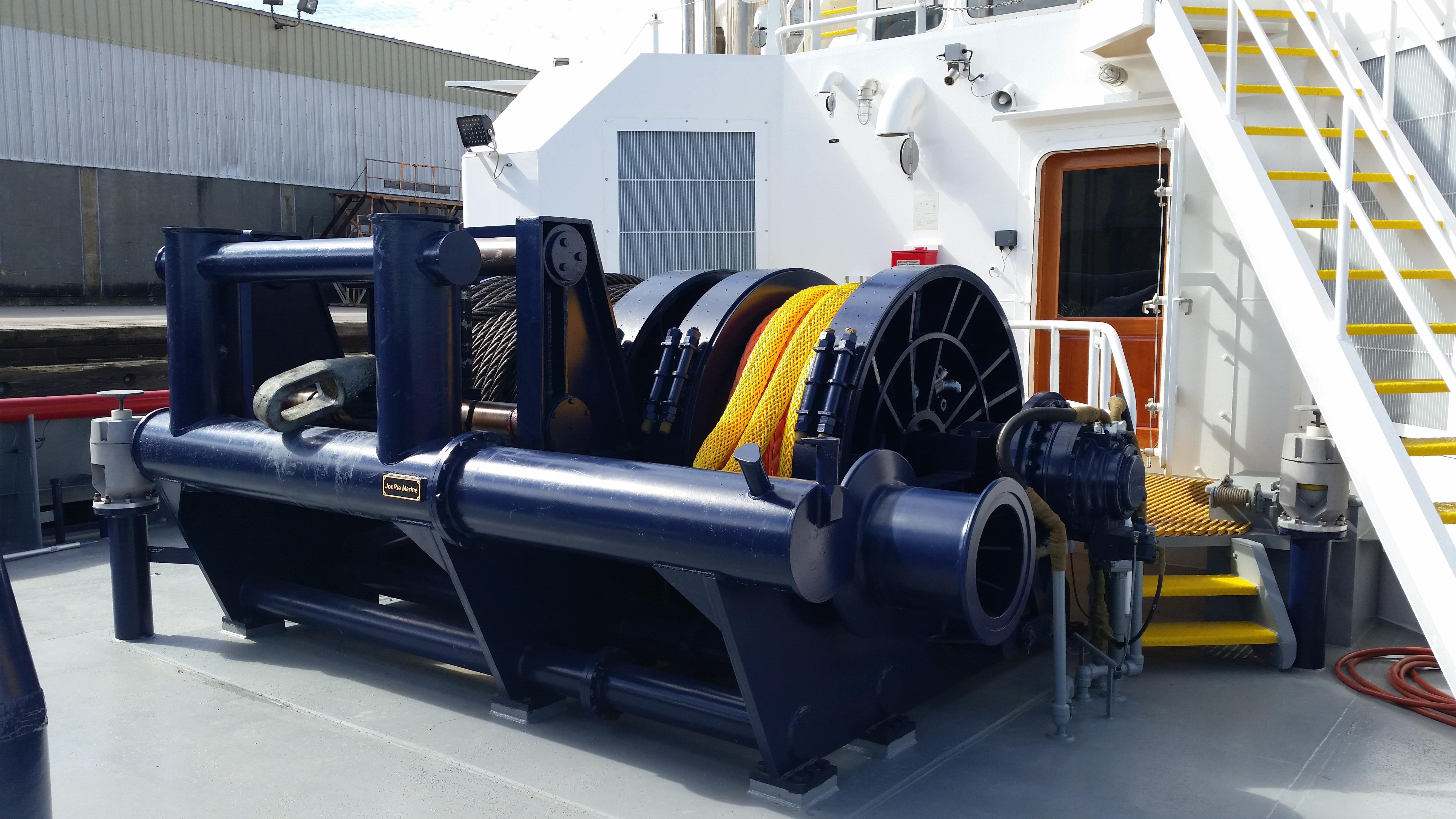 For JonRie customers, the advantages of hydraulics with Hagglunds direct drive hydraulic motors adds up to productivity. "At the end of the day, Hagglunds motors can take a beating."

The rigors of escort winching

To explain just how much of a beating Hägglunds motors endure, Durar gives the example of escort winching. In this application, the stern of a tanker with a rudder failure is tethered to the bow of a tug, which directs the tanker using its own steering force.

“What you’re doing is jackknifing the tug under the commands of the pilot,” Durar relates. “In that situation, you get line pulls that aren’t 2, 3 or 4 tons, but rather 50, 60 or 70 tons. The tug may be almost at the point of capsizing to keep the tanker from hitting an obstacle like a bridge.” 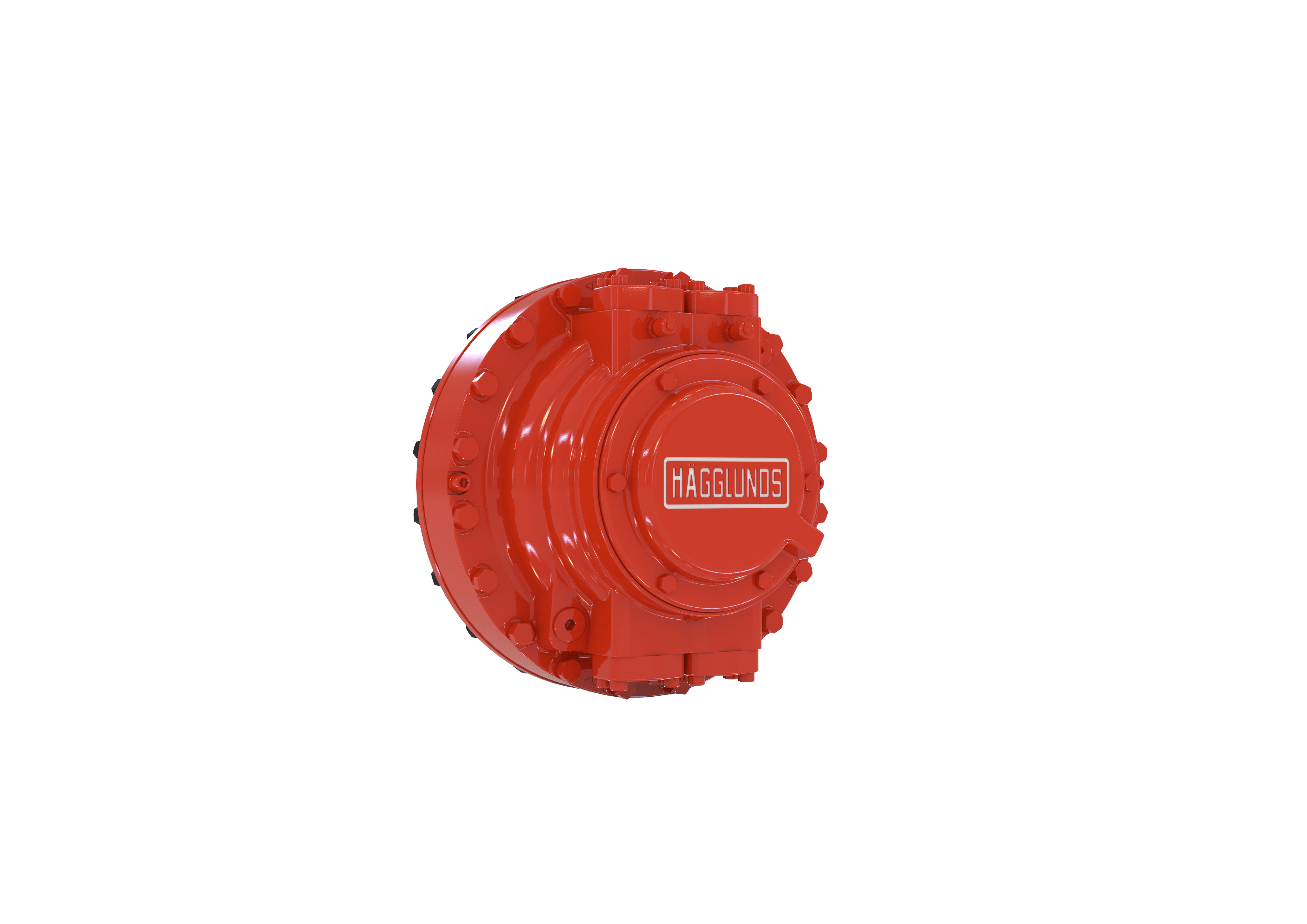 Durability, however, is just one side of the Hägglunds motor equation. The other is control, especially when it comes to winch tension.

“Tension control is very important in ship docking, for example, where you’re managing the tension that’s between your tug and the ship,” says Durar. “Basically, you set your tension and control it with the Hägglunds motor and the hydraulics, not the brake.”

Besides offering the best possible tension control, Hägglunds motors have free-wheeling capability, and in Durar’s mind the two features are inseparable. To explain why, he describes a tugboat letting out the line as it quickly moves away from its tow, repositioning itself for the next move.

“It’s what I call controlled free-wheeling, which is basically back-tensioning the line a little so that it stays out of the water and doesn’t go slack,” Durar says. “A tugboat has screws for propulsion, so you don’t want the line in the water at any point. It’s the other aspect of tension control.”

A safe bet for meeting regulations

Free-wheeling, combined with the gearless nature of a direct drive system, also allows easy compliance with class requirements. Both US and European class societies demand an abort or emergency release function, so that the line can be rapidly disconnected if one of the tethered vessels starts to sink.

“With a geared system, you have no way to abort without a clutch or something similar,” Durar says. “Instead of that, we supercharge or flood the Hägglunds motor, allowing it to free-wheel and also protect the motor.”

In fact, JonRie winches have an auto-abort function, which switches to a 24 V backup system and pumps off the brakes.

Clearing the deck with power density

As tough and versatile as Hägglunds motors are, JonRie has no difficulties incorporating them into the winches. On the contrary, the motors’ high power density ensures that both power and function can be packed into a small amount of deck space. JonRie relies mainly on motors from the Hägglunds Compact series, which includes the Hägglunds CA, CB and CBm, as well as the newer Hägglunds CAb.

“Deck space is always a premium,” says Durar. “The Hägglunds CAb is a very small Hägglunds motor, and we’ve been experimenting with it on our level winds. It’s a nice stout motor in a good little package, and the principle is the same. It takes a licking but keeps on ticking.”

The level winds Durar refers to are used for spooling hawser during ship docking, which involves pulling back full on the rope with a force of many tons. When the level wind is in neutral, the motor can free-wheel to allow the loads on the level wind carriage to move out of the line of force. When using the Hägglunds CAb to work with these lines, the difference is remarkable.

“Before, when you were trying to walk around the winch, there was always something in the way,” Durar says. “Now we put that small Hägglunds CAb motor on there and it tucks right in. It makes it possible for everything to be close to the winch.”

Proven reasons to stay with hydraulics

Given all the advantages JonRie experiences with Hägglunds drives, Durar is surprised to see a trend toward electromechanical drives on the market. Forty years ago, he says, putting electric motors on the decks of marine vessels was not viewed as moving forward. Though he sees an upswing in their popularity, he believes the fad will be short-lived.

“You don’t want to go with slip clutches and water-cooled brakes and all these gimmicks,” Durar maintains. Above all, he points out the issue of over dimensioning. “We’ve researched it, and to do what we do with hydraulics at 100 horsepower, you’d probably need 200 to 250 horsepower from an electric motor, as you start with peak torque and can only slow the drive down. The problem with that is it gets quite expensive. What’s the upside to that?”

In part, Durar thinks the trend toward electromechanical drives is a misguided attempt to think green. “People get it in their heads that it’s clean because there’s no hydraulic oil,” he says. “Nowadays you use a synthetic hydraulic oil that doesn’t pollute. And electric winches still have gearboxes, so you never get away from lubricants.”

“It’s the flavor of the day,” Durar concludes. “I don’t think they’ve really solved the problems with AC drives, and you can do a whole heck of a lot with hydraulics.”

Keeping winches and their owners in business

For JonRie customers, the advantages of hydraulics with Hägglunds motors add up to productivity. At the end of the day a boat is an enterprise, and Durar finds that the uptime provided by Hägglunds motors is key to turning a profit.

“Our customers are sold on the reliability,” Durar says. “If you’re repairing a winch every four or five years, it’s a budget eater. When you have it in service for 15 years without doing anything to it, it makes you money.”

Service on Hägglunds motors, says Durar, is never frequent. If customers filter their oil properly, the motors commonly run for 20 or 25 years. “We just had two motors serviced, one of which had been in service for 28 years,” he relates. “After 28 years, I think it deserves some service!”

Although JonRie does its own service for winches, the company turns to Bosch Rexroth if more than a seal change is required in a Hägglunds motor. When it comes to getting the job done right, only the Hägglunds team has Durar’s trust.

“When they do a repair at their US service centers in Ohio and Texas, we know it’s 100%,” says Durar. “Anywhere else is not a qualified Hägglunds shop, and we stay away from places that aren’t qualified. We have a good relationship with the Hägglunds team.”

In fact, Durar credits some of JonRie’s own success to that relationship, and above all to the knowledge and support of Hägglunds experts. Over the years, he has seen both continuity and dedication.

“Our Hägglunds salesman for many years was a great hydraulic engineer – my mentor, if you know what I mean,” Durar relates. “He was great with the motors and applications, and great with the customer service. But they’re all just good people. They respond. They’re supportive. I really can’t say enough about them.”

AXYS Forms Partnership with Incostas in

IOSTIA and TSC Publishing in Partnership

ASV Global and BMT in Partnership for Re

OceanGate and Virtual Wonders in Partner

Equinor in Strategic Partnership with Mi

Teledyne Marine and Nekton in Strategic