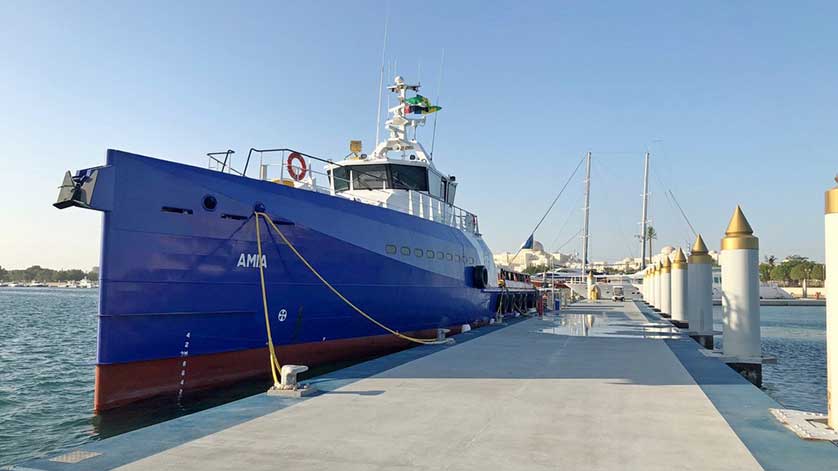 Damen Shipyards Group has delivered its first vessels to Marine Core & Charter LLC (MC2), a marine services company supporting the offshore energy sector in the Arabian Gulf. This is the first transaction between the two organisations and Damen is delighted to be setting out on what it hopes will be a productive and long-lasting relationship with MC2.

The transaction is also a milestone as it represents the first deliveries of the Fast Crew Supplier (FCS) 4008 class, Damen’s latest addition to its FCS range. The first of the two FCS 4008 vessels was delivered in late September, just two months after the initial contract signing.

The second FCS 4008, named AMIA was officially handed over at a ceremony held at the Emirates Palace Marina in Abu Dhabi on the 23rd of November. The 9-year old son of the CEO held a fantastic speech, followed by his grandmother who cut the ribbon.

Like her sister ship AMPI, the AMIA is also fitted with seating for 90 personnel, has a top speed of 25 knots and a range of 1200 nautical miles. This gives her the ability to reach even the furthest offshore installations. 140 square meters of cargo deck aft enable her to carry containers and a wide range of other equipment. Damen’s famous ‘axe bow’ design delivers excellent seakeeping in a wide range of weather conditions, ensuring that personnel arrive at their destinations ready for work.

The 40-metre FCS 4008 was introduced recently to fill the gap between the 53-metre FCS 5009 and the 33-metre FCS 3307. The FCS 4008 is essentially a scaled-down version of the FCS 5009 and is fully capable of taking on the same, wide variety of roles. As well as personnel transfers, it can be fitted out for fire-fighting, oil recovery, safety stand-by, towing and security duties; on a smaller scale, but also at a lower cost. As with all Damen designs, the FCS range is subject to continuous updates based on customer requests and feedback, and so the AMPI and AMIA represent the very latest in FCS design and optimisation.

The CEO of Marine Core & Charter L.L.C, Mr. Adib Abdel Massih, commented, “The delivery by Damen of the second FCS 4008 brings our total fleet up to 20 vessels. With the addition of these two boats, we have achieved the growth we had planned for this year, both in terms of the number of vessels and the expansion of our operations. We chose Damen in part due to their extensive experience in the crew boat market, the local support in the UAE and also because of their build for stock policy. Their ability to deliver vessels very rapidly when a company like ourselves wins new business was a deciding factor.”

Mr. Massih also commended the design of the FCS 4008, in particular its unique ability to deliver personnel quickly and comfortably in the adverse weather that can occur in the Gulf. AMPI has started operations on a contract with a duration of up to three years. AMIA is expected to operate from Abu Dhabi.

MC2’s core activities are chartering, ship management, towage and transportation, and offshore services. It operates a diverse fleet of vessels ranging from jack-up rigs and accommodation barges to tugs and Multi Cats. This latest acquisition is part of its strategy to build on its focus on chartering and increase its role in marine contracting using its own fleet.