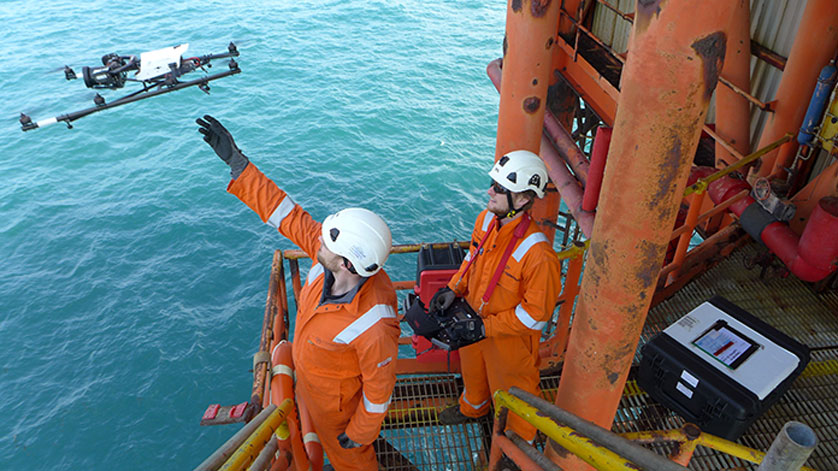 Cyberhawk, a world leader in drone inspection and visual asset management software, has announced its most successful year as the company celebrates a decade in business.

Cyberhawk announced turnover of £4million for year ended 31 March 2018, an increase of 34% on 2016-17. The year ended with profits of just under £700,000, significantly up on the previous year. In addition, Cyberhawk Inc. in the US has increased turnover threefold following the opening of a Houston office and increasing customer awareness of Cyberhawk’s capabilities and experience.

Cyberhawk has increased its global operations with overseas revenues now accounting for 35% of the business’ turnover and strong growth is expected to continue due to increasing international work, with first projects completed in the Caribbean and South America.

In line with this increasing growth, Cyberhawk also expanded its team by 26%% on the previous year, with 53 employees in 2017-18. In 2018-19, the company has already continued this growth trajectory with a further seven staff added to the team.

Highlights in 2017-18 include a world first inspection at a US nuclear plant, securing accreditation from the American Bureau of Shipping for its internal tank inspection solution and leading the development of UAV guidelines for a number of major industry bodies.

The company also won a three-year framework with one of the UK’s largest renewable operators which added to a growing number of agreements secured with multinationals. As well as winning the Best Safety Improvement Accolade at the UK Energy Innovation Awards, Cyberhawk was recently named Venture-backed Management Team of the Year at the BVCA Scottish Management Team Awards.

Cyberhawk’s proprietary visual asset management software, iHawk, also secured a three-year contract with an oil and gas supermajor to support the construction of petrochemical plant megaproject. Originally developed for asset integrity management, iHawk hosts visual asset data and engineering analysis in the cloud and supports inspection engineers to make evidence-based, critical asset decisions, prioritise maintenance activities and view a complete picture of their asset. Based on client demand, the software has been further developed this year to handle construction and decommissioning activities.

Chris Fleming, CEO at Cyberhawk, said: “We are extremely pleased with the progress made in our last financial year, which has been bolstered by a number of major achievements and successful development of some industry-changing solutions.

“We have spent the last ten years proving that drones generate major efficiencies in terms of cost, time and safety and it has been encouraging to see the number of operators embracing this technology rapidly increase.

“Collecting asset data is just one part of the puzzle, however, and efficiencies can be driven even further by using this data to its full potential. The progress being made in technologies like machine learning and artificial intelligence is set to transform the asset management landscape even further, opening up the potential for activities such as condition monitoring and predictive maintenance.

A Successful Float-Out for USNS Hershel

AgileTek Wins the Small Company of the Y

Successful ROV Inspection of the Apulian

Cyberhawk to Discuss the Evolution of As