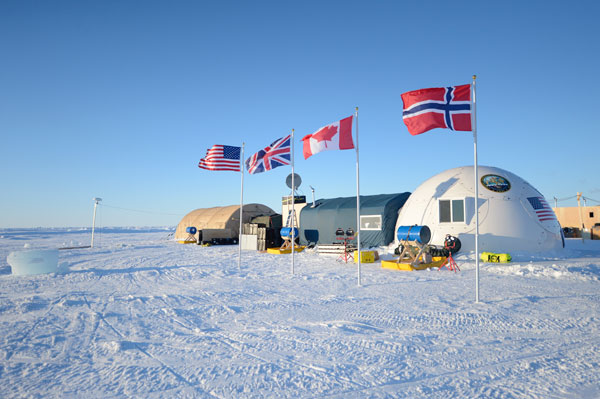 The Bureau of Safety and Environmental Enforcement (BSEE) will test a Geo-Referencing Identification Satellite (GRIDSAT) tag project at the U.S. Navy’s Ice Camp Sargo, a temporary station on top of a floating ice sheet in the Arctic as part of Ice Exercise (ICEX) 2016.

The bureau will be testing the deployment and communication of the system, leaving several marking devices on the ice floe for long-term duration studies. Two methods of deployment will be used, one by a helicopter aerial drop of two GRIDSAT tags with floe spikes and another by manually inserting one GRIDSAT tag using an ice screw technique. If an oil spill were to occur in the Arctic, both methods would be utilized to tag and track spilled oil either trapped under or encapsulated in Arctic sea ice.

The extreme conditions in the Arctic, especially the presence of sea ice, create unique challenges to the identification, tracking and response to an oil spill, should one occur. The GRIDSAT radio/GPS marking device can be left on an ice floe to track the movement of the floe and entrapped oil for a period of up to nine months.

Oil Spill Preparedness Engineers and Specialists from BSEE are part of a diverse and multi-national team with more than 200 participants from more than 35 organizations coming together to support over 25 test objectives at ICEX 2016. The Bureau’s activities support both the ICEX 2016 Arctic research program and the Bureau’s ongoing efforts to address challenges associated with energy exploration and development in the Arctic.

The ICEX 2016 is a five-week exercise designed to assess the operational readiness of the U.S. Navy’s submarine force while also continuing to advance scientific research in the arctic region. The U.S. Navy's Arctic Submarine Laboratory, based in San Diego, serves as the lead organization for coordinating, planning and executing the exercise involving two submarines and multiple nations.

Scott A. Angelle Named as Director of BS