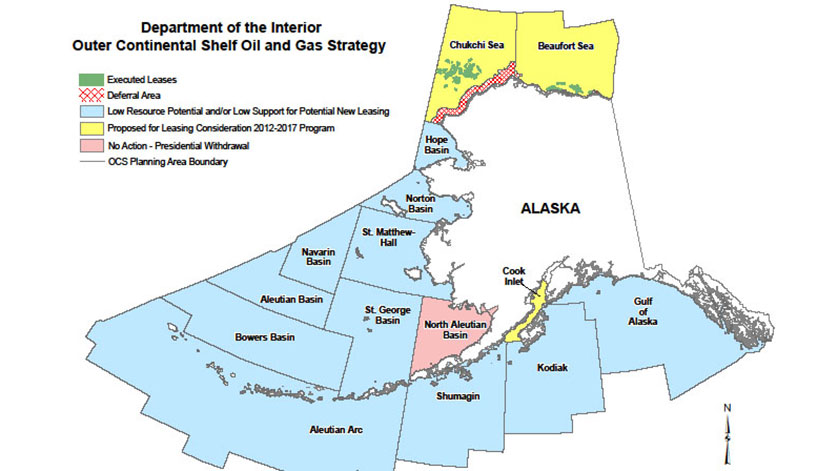 The Bureau of Ocean Energy Management (BOEM) has announced the availability of a Final Environmental Impact Statement (EIS) analyzing the possible environmental impacts of oil and gas development in the federal submerged lands of Cook Inlet, off Alaska’s southcentral coast.

The EIS was prepared pursuant to the Department of the Interior’s 2012-2017 OCS Oil & Gas Leasing Program, which proposes one lease sale (OCS Oil & Gas Lease Sale 244) in Cook Inlet in June 2017. Publication of this EIS does not mean the decision has been made to hold the lease sale. Rather, the Department of the Interior will use the findings therein to inform their decision whether to hold the lease sale.

The EIS analyzes the important environmental resources and uses (e.g., sea otter and beluga whale populations; subsistence activities; commercial fishing of pacific salmon and halibut; and more) that currently exist within the Cook Inlet planning area and identifies robust mitigation measures to be considered in leasing the area. After analyzing a range of alternatives to be considered for leasing, the EIS also identifies an agency preferred alternative.

The final Lease Sale 244 EIS is available now at: www.boem.gov/ak244. The Notice of Availability of the EIS will be published in the Federal Register on Friday, December 23. “Cook Inlet is a complex area, with multiple uses, significant resource potential and important environmental areas,” said BOEM Director Abigail Ross Hopper. “The Final EIS identifies important mitigations to appropriately protect sensitive species and habitat. BOEM’s experts have done an excellent job analyzing the possible environmental impacts of this potential lease sale.”

In November 2013, BOEM identified areas for potential leasing as part of Lease Sale 244. In preparing the Area Identification, BOEM used scientific information and stakeholder feedback to proactively determine which parts of the planning area would be carried forward for environmental analysis, focusing on those specific areas that have the greatest resource potential and industry interest while reducing potential conflicts with environmental and subsistence considerations.

Specifically, the area identified for the potential Cook Inlet lease sale is close to existing leases in Cook Inlet’s state waters; avoids nearly all of the areas designated as critical habitat for the beluga whale and the northern sea otter; avoids the critical habitat for the Steller sea lion; and excludes much of the subsistence-use area for the Native villages of Nanwalek, Port Graham and Seldovia, as requested by the tribal governments. In October 2014 BOEM published a Notice of Intent to Prepare an EIS in the Federal Register. It opened a public comment period and hosted scoping meetings in Seldovia, Homer, Nanwalek, Soldotna and Anchorage. The input received during that comment period was used to prepare a draft EIS, published in July 2016. Further public input received on that draft, including public hearings in Anchorage, Kenai, and Homer, was used to prepare the final EIS.