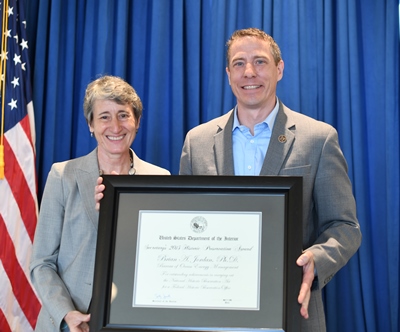 The Bureau of Ocean Energy Management (BOEM) is proud to announce that Secretary Sally Jewell presented the Secretary of the Interior’s Historic Preservation Award for 2015 to Dr. Brian Jordan, BOEM’s Chief of the Branch of Environmental Consultation and Federal Preservation Officer, at a June 17, 2016, ceremony at the Department of the Interior. Dr. Jordan was one of four recipients honored this year.

“On behalf of all of us at the Bureau of Ocean Energy Management, and especially the Regional Preservation Officers who nominated him, I am extremely proud to have someone of Brian’s extraordinary commitment and talents on our team. I share the high regard and appreciation for his tireless efforts over the past few years in building our Historic Preservation Program and strengthening our relationships with stakeholders," said BOEM Director Abigail Ross Hopper.

The Secretary’s award recognizes special achievements by employees of Federal, state, tribal, and local preservation programs who have made outstanding contributions to the preservation of historic places. Nominees must be individuals whose contributions surpass the expected scope of their position, and whose creativity and expertise have significantly fostered the overall goals of the National Historic Preservation Act.

Among the many accomplishments noted in the nomination were Brian's (1) tireless advocacy for the establishment and stewardship of BOEM’s first Federal Historic Preservation Program; (2) creative approach to preserving some of the most challenging historic properties—submerged paleocultural landscapes; and (3) establishing BOEM's reputation as a highly-engaged and supportive agency for historic preservation activities.

Brian is a native of College Station, Texas, and graduated from A&M Consolidated High School. He earned a Bachelor of Arts degree in Anthropology from Texas A&M University, where he took classes as part of the Nautical Archaeology Program until transferring to the University of Minnesota. At Minnesota, he earned a Master of Science degree from the Department of Wood and Paper Science (now the Department of Bioproducts and Biosystems Engineering), and earned his Doctorate in Natural Resource Science and Management. In his career as a marine archaeologist, Brian has participated in and conducted marine archaeology surveys and excavations offshore the United States and in numerous countries on three other continents, including Turkey, Denmark, Portugal, and Morocco. He also worked with and advised institutes and government representatives of several countries on the survey, excavation, and management of submerged cultural resources. Brian joined BOEM’s environmental assessment staff in 2010.