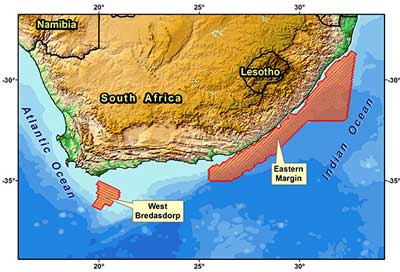 CGG has announced that it will commence a multi-client airborne gravity and magnetic survey offshore South Africa. The Petroleum Agency of South Africa (PASA) has authorized the program which will extend across two blocks totaling approximately 78,000 line kilometers. The survey areas are located offshore Cape Agulhas (West Bredasdorp area) and offshore Durban (Eastern Margin area). Data acquisition will commence in January 2016 and is anticipated to take four months utilizing specialized geophysical survey aircraft. The project has received significant prefunding from the oil industry; survey data and interpretation products will be available for licensing in mid-2016.

The survey will provide partial coverage of the largely underexplored Western Bredasdorp, Durban and Zululand basins and the data will assist with mapping crystalline basement and magnetic and density anomalies within the sedimentary section. The airborne survey will allow data collection through the “transition zone” from the marine environment to the near-shore.

A comprehensive interpretation, combining this new data set with available geologic and geophysical data, will also be undertaken by CGG’s in-house interpretation team. Deliverables will include a full geophysical interpretation report, including definition of basement lithology and structure, mapping of sediment fairways and depositional-centers and any intrusives or salt which may be present in the sedimentary section. The final results will be presented in ArcGIS® format for assimilation into the clients’ own seismic, geological and well control databases. These survey deliverables will provide significant assistance to exploration and de-risking of prospective areas by oil companies when they become available for licensing in mid-2016.

Greg Paleolog, Senior Vice President, Multi-Physics, CGG, said: "Our multi-client South Africa project will be a great addition to our existing multi-client gravity & magnetic database that contains over 16 million line kilometers of profile data. It will result in a unique exploration dataset in an exciting frontier area about which we have, as yet, very little information regarding active petroleum systems."